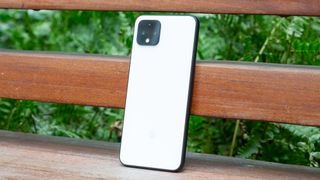 Smartphone screens are now stretching to nearly 7 inches, but there's no beating the look and feel of a device that fits snugly in one hand. If you believe good things come in compact packages, you'd be well-advised to look at Apple, as the iPhone maker continues to dominate the market for small phones with a number of compelling options.

The premier "small" iPhone these days is the 5.8-inch iPhone 11 Pro, which uses a nearly bezel-less design to maximize display real estate. But there's another, older travel-sized iPhone that can now be had for less money than ever: the 4.7-inch iPhone 8. (That's to say nothing of the 4-inch iPhone SE — provided you can still track one down these days. Fortunately, Apple looks to be gearing up to introduce an iPhone SE 2 in the next few months.)

If you're looking for a small phone that runs Android, you may prefer the Pixel 4, which packs new features like secure facial identification and a state-of-the-art dual-lens camera system behind a 5.7-inch, 90 Hz display. You'd also be wise to check out the Galaxy S10e, which technically has a larger screen than Google's offering but is actually more compact, thanks to its smaller bezels. And if you're phone hunting on a budget, you'll find a lot to love in Google's $399, 5.6-inch Pixel 3a.

Here's a closer look at some of the best small phones out there right now, with screens sized under 6 inches. For our overall favorite handsets regardless of size, be sure to take a peek at our list of the best smartphones available today.

The 5.8-inch iPhone 11 Pro isn't just the fastest small phone you can use easily with one hand — it's one of the fastest smartphones around, period. Just like the 6.1-inch iPhone 11 and 6.5-inch iPhone 11 Pro Max, it's powered by Apple's state-of-the-art A13 Bionic chipset, which is powerful enough to enable unprecedented higher-order machine learning capabilities. The iPhone 11 Pro leverages the A13's power to pull off some stunning photography tricks, like Semantic Rendering, which recognizes different objects in a scene and intelligently exposes each uniquely, for a better result.

This iPhone also marks Apple's first with its Super Retina XDR display, an OLED panel that topped an almost unbelievable 752 nits of peak brightness in our lab testing. Couple all that with the added convenience of Face ID, the versatility of a new ultrawide lens and 18W fast charging out of the box, and the iPhone 11 Pro is an all-around remarkable flagship handset, but especially so for those who prefer smaller phones.

At 5.7 inches, Google's new Pixel 4 isn't an especially small phone — though it is significantly more pocketable than many top-line flagships today, including the iPhone 11 and the OnePlus 7T. With the Pixel 4, Google's trimmed out the bottom bezel, while leaving the Pixel 3's forehead intact, and repurposing that space for a sophisticated Face Unlock feature that rivals Apple's Face ID in terms of security. The top bezel is also where the Pixel 4's Soli radar system is stored, so the device can respond to hand gestures in midair.

But this being a Pixel, the biggest improvements have been levied at the camera, as you'd expect. The Pixel 4 features Google's first dual-lens imaging system, partnering a telephoto lens with a standard wide angle one for improved zoom shots. Our lone complaint about the Pixel 4 lies with the device's middling battery life — at just 8 hours, it's far and away eclipsed by the newest iPhones. but if you can see past that, the Pixel 4 will delight you with its clever uses of machine learning and stunning photography.

The Galaxy S10e is a different kind of flagship phone from Samsung. At $749, it's a bit cheaper than the 6.1-inch S10 and 6.4-inch S10 Plus, which start at $899 and $999, respectively. There are a few concessions for that lower price — namely a dual rear camera setup instead of a triple one, and a side-mounted fingerprint sensor replacing the regular S10's in-display technology. But the S10e is every bit as powerful and fast as its more expensive siblings, despite the fact that it's significantly smaller. The handset's 5.8-inch Dynamic AMOLED panel is quite large, but because it's wrapped in a body with extremely slim bezels, the result is one of the most compact premium phones on the market today. In a lot of ways, it's evocative of the old iPhone SE: still superfast and very capable, but at a much more reasonable price, and in a package that small phone lovers will surely appreciate.

to U.S. and over 200 international destinations
View
at
Verizon Wireless
We check over 130 million products every day for the best prices
View All Deals
powered by

We know what you're thinking — a 6.3-inch smartphone is not small, and doesn't even adhere to the criteria of this list! We understand, but take our word for it: the Galaxy Note 10 is more compact than you'd ever imagine, and it's all thanks to the phone's miniscule bezels, which deliver an all-screen experience in the truest sense. Plus, the panel Samsung shoehorned into its latest phablet is a beaut — a rich Dynamic AMOLED display with curved edges, shrouded in shatter-resistant Gorilla Glass 6.

Under the hood, the Note 10 boasts Qualcomm's latest premium processor as you'd expect, as well as a sizable 3,500-mAh battery fitted with Samsung's new 25W fast charging technology. Meanwhile, the S Pen has learned some clever new air gestures that allow you to navigate the phone simply by waving the stylus in front of the screen. If you've ever been intrigued by the productivity potential of the Note series, but the device's prohibitively large proportions put you off, the Note 10 is definitely for you. (And if not, well, there's always the 6.8-inch Note 10 Plus.)

If network is congested, users may notice reduced speeds
View
at
Verizon Wireless
We check over 130 million products every day for the best prices
View All Deals
powered by

So you want an all-around great smartphone with a camera that would put most flagship shooters to shame, but you don't want to pay more than $400 for it. In the past, requesting such a device might get you laughed out of the retailer of your choosing, but then Google introduced the Pixel 3a and suddenly, everything changed.

The 5.6-inch Pixel 3a (and its larger sibling, the 6-inch Pixel 3a XL) touts the same 12.2-megapixel rear camera in Google's premium smartphones, along with an OLED display, long-lasting battery and the latest and greatest Android software. However, it costs only $399 — half the price of the Pixel 3. You do lose out on some amenities, like the Pixel 3's top-tier Snapdragon 845 processor, wide-angle front-facing camera, water resistance and wireless charging. However, the rest of the device is far better than its midrange price tag would suggest, and easily our new top pick for a handset under $400.

It's easy to dismiss the now two-year old iPhone 8 as undeserving of your consideration, and even easier to overlook it in favor of the flashier iPhone 11. However, if you're interested in getting the best small phone for your dollar, that would be a mistake in both respects. For starters, the iPhone 8 is powered by Apple's A11 Bionic CPU, which is still pretty sprightly compared to the chips in midrange and budget Android devices. The device's glass design allows the iPhone 8 to support wireless charging, something previous iPhones couldn't do. And speaking of battery, the iPhone 8 lasts 9 hours, 54 minutes on a charge — nearly an hour longer than the iPhone 7. If you want a phone with a screen that's smaller than 5 inches, that feels more like a modern iPhone SE, the 4.7-inch iPhone 8 is the device to get — and these days, it starts at just $449.

A screen measuring 5.8 inches doesn't sound like it would make for a particularly small phone. But what you have to remember is that the Galaxy S9 isn't like other phones — and that's all thanks to its wraparound Infinity Display. Samsung's ability to curve its OLED panel around the sides, while trimming the bezels above and below, allows the Galaxy S9 to shoehorn a massive display into a very compact form factor. In other words, you're not sacrificing on screen size for comfortable one-handed operation. It also helps that the panel itself is among the brightest and most vibrant in its class (only eclipsed by the newer S10 range, as well as Apple's iPhones) and that the Galaxy S9 is as well-rounded as any Android handset that came out in 2018, between its speedy Snapdragon 845 processor and solid photos in low light.

For just under $350, the Nokia 7.1 gives you a 5.8-inch HDR10-equipped LCD display, respectable performance from a Snapdragon 636 processor, 64GB of storage that can be expanded with a microSD card, among the best dual cameras for the price (save for the Pixel 3a's, of course), attractive design and the latest version of Android in all its stock glory, as Google intended. Like the Pixel, the Nokia 7.1 is a simple but effective expression of a modern Android phone, without all the frivolous bells and whistles that impede devices from other phone makers.

Looking for a cheap phone with a pocketable design that doesn't compromise on screen size? The 5.7-inch Moto G6 fills that role perfectly. It cost just $249 unlocked when it launched in 2018, but is going for much less these days and works on all major carriers. Its Snapdragon 450 processor may not seem particularly powerful on paper, but it gets the job done and can handle most uses outside of hardcore gaming quite well. The software experience is top-notch, and its dual cameras — while being average for a budget handset — feature an assortment of fun modes, from the ability to capture bokeh-effect portraits to stylized partial-color shots, as well as Google Lens baked right into the shooter. Although it's since been eclipsed by the newer, larger and pricier 6.2-inch Moto G7, the G6 remains an elegant inexpensive smartphone for practically anyone, but its especially great for users looking for something a little more compact.