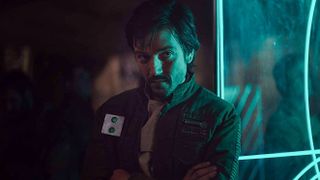 Lucasfilm and Disney will continue to expand on the Star Wars universe with a second live-action series. This one is inspired by the 2016 spinoff film Rogue One: A Star Wars Story. The yet-to-be-named show will be available only on the Disney Plus streaming service, joining The Mandalorian as Disney's subscription service continues to ramp up its exclusive content.

The upcoming series will take place before the events of Rogue One, and follow the adventures of Cassian Andor – a rebel spy who was a pivotal character in the movie. Lucasfilm first announced this deep dive into Cassian’s backstory in a November 2018 statement, describing it as a “rousing spy thriller” that would fill the gaps in the rebel captain’s shadowed past.

While details about the new program remain under wraps, Disney has consistently teased fans with production updates and a couple of returning cast members. Here’s everything we know about the untitled Cassian Andor series coming to Disney Plus, including a release date, early cast list and all of the information that has surfaced online so far.

The Cassian Andor series doesn’t have a premiere date yet, but diehards might have to wait until 2021 for it to air.

During Disney’s D23 Expo 2019 on August 23, Lucasfilm executive producer Kathleen Kennedy confirmed that the Cassian series is currently in pre-production, and will go into production in 2020.

While Cassian Andor's release date is still up in the air, by using the production timeline for The Mandalorian, we can get an idea of how long we might have to wait.

The Mandalorian took five months to shoot: Filming began in the first week of October 2018, and wrapped in late February 2019. The show debuted on November 12, which means a total of 14 months passed between the show's first day of production and its release date.

The Cassian series could take roughly the same amount of time, barring any major issues. That means a tentative debut sometime in 2021, depending on when Lucasfilm begins shooting.

There’s no trailer for the Cassian Andor series just yet. Since the show is still in pre-production, there aren’t any set photos floating around online to satiate hungry Star Wars fans, either. However, Disney has confirmed that two actors from Rogue One will return for the Disney Plus exclusive.

Diego Luna, who played Cassian in the film, will reprise his role as the rebel spy in the Disney Plus series. The 39-year-old Mexican actor grew up watching the original Star Wars trilogy, and jumped at the opportunity to continue playing the character.

“It’s a universe I grew up with. It’s very important in my life and love for cinema, because it’s been present since I was young,” he told Inverse. “It’s beautiful news to me. It means a lot more time to tell the story of a character, to explore many things I wanted to, and didn’t know I was able to, because we all know the ending of Rogue One.”

Alan Tudyk will also return to voice the wisecracking K-2SO, a reprogrammed Imperial droid who accompanied Cassian on his adventures in Rogue One. Back in April, Disney announced that the 48-year-old American actor would join the cast. Lucasfilm’s Kennedy also brought both Tudyk and Luna on stage briefly to tease the show during the D23 Expo 2019.

The Hollywood Reporter confirmed last November that Stephen Schiff would be the Cassian Andor's showrunner. Schiff was not involved with Rogue One, but received two Emmy nominations for his work on FX's The Americans.

Tony Gilroy, who co-wrote the Rogue One screenplay with Chris Weitz, will return to work on the TV series. Variety reported that Gilroy will write the pilot for the series, and direct multiple episodes. Weitz wrote the screenplays for the first four Jason Bourne films.

What to expect in the Cassian Andor series

The 2016 film follows the story of a ragtag team of freedom fighters from the Rebel Alliance. They embark on a mission to steal the construction plans for the Death Star, the Galactic Empire’s planet-obliterating superweapon. Cassian is a covert-operations specialist who plays a central role in the plan, and who has been a member of the rebel group for decades.

Rogue One reveals that Cassian has been fighting as a rebel since he was six years old' he mentions that he’s lost people close to him due to the Empire’s oppressive regime. The Disney Plus show could include flashbacks of a young Cassian suffering terrible losses at the hands of the Empire, and reveal how it shaped him into the expert spy we saw in Rogue One.

The program will also almost certainly include K-2SO's origin story, and explain how he was reprogrammed to assist the Rebel Alliance. There was no mention in Rogue One of how the rebels turned the droid from an Imperial pawn into a quick-witted sidekick. But it’s likely that Cassian had a lot to do with that process.

Rogue One was proof that Star Wars fans want a deeper look at the inner workings of the franchise’s universe. The film grossed $1 billion worldwide, making it the third-highest-grossing entry in the series. The Cassian Andor show will expand on a story that clearly struck a chord with audiences, and may attract more users to Disney Plus.