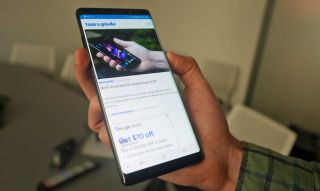 A new Galaxy Note is on its way — Samsung takes the wraps off the Galaxy Note 10 at its Unpacked event tomorrow (Aug. 7). And that could mean your current smartphone is living on borrowed time.

Luckily, there’s a trade-in service that’s waiting for your current Galaxy Note with open arms and waiting checkbook. And the cash or credit you get back could go a long way toward absorbing some of the cost of upgrading to Samsung’s new model, especially if you’re interested in the larger and likely more expensive Note 10+.

With prices on flagship phones hovering on either side of $1,000 these days, both wireless carriers and phone makers have made a practice of offering rebates on newly released phones when you trade in your older model. That’s certain to continue when the Galaxy Note 10 debuts — Samsung is already offering up to $600 off the price of the Note 10 for people reserving the new phone when they trade-in the most recent Samsung, Apple and Google flagships. (The trade-in value decreases the older your phone is.) We’d expect wireless carriers to follow Samsung’s lead and offer trade-in deals of their own once Note 10 preorders begin.

You don’t have to wait until Aug. 7 to find out what your current smartphone is worth. A quick survey of assorted trade-in sites can give you a pretty good idea of what kind of return to expect  if you traded in your current Galaxy Note smartphone right now.

To help you assess the value of your current phone, we checked prices at several trusted resale and trade-in sites to see what they’re offering for the last three Galaxy Note models — the Galaxy Note 9, Galaxy Note 8 and Galaxy Note 5. (If you still have a Galaxy Note 7 to trade in, maybe consult your local fire department.) Expect these values to fluctuate, especially once the Galaxy Note 10 hits retail shelves.

Selling your Galaxy Note 9 at a trade-in site is rather challenging. Many popular reseller sites we checked, such as Nextworth and Amazon, don’t quote prices for models of last year’s Note phones. If you’re thinking of upgrading to a Note 10 or 10+ from a Note 9, you might want to wait to see what trade-in deals Samsung and partnering wireless carriers offer, as newer models in good condition will receive the highest rebates.

That said, Walmart offers the most return for the Galaxy Note 9, although trade-in offers for the device vary depending on the carrier model. A Galaxy Note 9 that’s tied to Verizon or unlocked will fetch $290 in credit. If it’s a model tied to Sprint or T-Mobile, though, you’ll only get $241 from Walmart. You’re better off bringing those Note 9s to Gazelle, where the Sprint model is worth $275 and the T-Mobile one is worth $317. AT&T users get the most in return Best Buy.

The Note 9 prices listed for Gamestop reflect a standard trade-in credit. Gamestop Pro Members can expect a higher return: between $231 and $264 for the Galaxy Note 9 depending on the carrier, just as an example. A Gamestop Pro membership costs $15 a year.

If you have a Galaxy Note 8, Gamestop offers the best trade-in value, specifically if you have a model tied to AT&T. But if your device is a T-Mobile, Verizon, or unlocked version, the best return you’ll get is from Gazelle. Only if you have Sprint should you try to trade in your Note 8 on Amazon.

Best Buy should be your last resort for selling a Note 8. The retailer offesr just $125 for AT&T, Sprint, and Verizon devices, and won’t accept unlocked nor T-Mobile models.

Though it’s four years old, the Galaxy Note 5 can still generate a little bit of cash if you trade in that device. Gazelle offers the best return at $63, but only for T-Mobile and Verizon models. If you have an unlocked phone, Gazelle is also your best option. For AT&T and Sprint versions, Amazon’s trade-in service is the move.

For each trade-in value we quoted, we assumed the Galaxy Note in question was fully functioning with signs of normal use and the phone reset to factory settings. The worse condition your phone is in (or if it’s still loaded with your files), the lower the trade-in value you can expect.