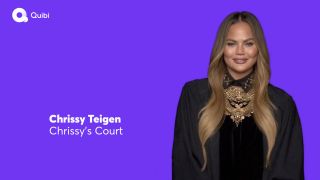 LAS VEGAS – Like a lot of other videophiles, I’d heard of Quibi before CES 2020, but wasn’t sure what to make of it. This streaming service, overseen by media mogul Jeffrey Katzenberg and tech mogul Meg Whitman, wants to present prestige TV in its shortest possible format: segments of 10 minutes or less.

I assumed that this was a recipe for disaster. But at a meeting with Quibi’s developers, I learned all about the talent and technology behind the streaming service, as well as what sets it apart from more traditional subscriptions.

At a basic level, Quibi is just high-budget, short-form content. That’s not too hard to parse. But it also leverages smartphone portrait and landscape orientations in a way that I’ve never seen before, opening the door for a totally new style of editing.

Quibi can also customize content based on the time of day, suggesting that it could do similar things in the future based on location, weather or even how fast you’re moving.

While I’m not fully convinced that Quibi will be the next big thing, I’m also not convinced that it’s destined for the ash-heap of streaming history. If there really is a demand for meticulously produced videos short enough to fill the gaps in everyday life, Quibi seems primed to fill it.

First and foremost, some pertinent details about Quibi: It’s a paid streaming service for iOS and Android. It won’t be available for computers or game consoles, at least not at first, because the content is optimized for mobile devices.

The service will launch on April 6, 2020, and offer two tiers of pricing. Users can pay $5 per month to watch Quibi videos with ads or $8 per month for an ad-free experience.

Naturally, Quibi is targeting an audience that would be receptive to such a pitch. The intended demographic for Quibi is between 25 and 35 years old, approximately half female, and spends up to 60 minutes per day watching videos on a smartphone.

Quibi intends to deliver “moments of delight” in videos that last between three and 10 minutes. Users will probably not sit down to watch these videos like appointment TV; instead, they’ll catch them in brief bursts, perhaps while waiting for the bus, doing laundry or brushing their teeth.

What shows are on Quibi?

Whatever else you can say about Quibi, it’s attracted some impressive talent. Disney, Fox, NBC, WB, Sony and other major studios are on board, as are big creators like Steven Spielberg, Anna Kendrick, Antoine Fuqua, Ben Stiller, Chrissy Teigen, Serena Williams, Jennifer Lopez and more. Most shows on Quibi will be wholly original; some will be condensed versions of news or variety show broadcasts.

Quibi has three “tiers” of programming, based on the relative prestige (and budget) of the shows included. First, there’s the “Lighthouse” tier, which is comparable to an original streaming or cable drama. This includes programs from A-list talent like Spielberg, simply broken into 10-minute chapters rather than presented as full 40-minute episodes or two-hour movies. It’s arguably the riskiest of Quibi’s propositions, but has the potential to be the most engaging.

Then, there are “quick bites,” which comprise original programming but in formats well suited to 10-minute chunks. These include talk shows, documentaries and sports clips from talents like Teigen, Williams and the WWE. With a focus on home and garden, nature and documentary programming, these programs are more comparable to what you might find on daytime TV.

Finally, there’s “daily essentials,” which is what you’d probably expect from a service that sells itself on short clips. These are mostly recycled pieces of content from existing news, sports and tabloid channels.

You can also watch horoscopes, movie trailers and even cute animal videos, but it’s nothing that you couldn’t find on YouTube or similar short-video services. Since daily essentials are short, they’ll probably entertain people frequently and reliably, but they’re arguably the least interesting component of Quibi’s offerings.

Quibi has a niche in mind and some talent behind it, but those alone aren’t enough to propel a streaming service to success. Instead, I think the most interesting thing about Quibi is the fact that it’s willing to experiment with filmmaking for a mobile audience.

The Quibi team shared two prime examples of this philosophy with me. The first revolves around Steven Spielberg’s upcoming show, After Dark. This horror series will hopefully chill and delight viewers – but only between the hours of sundown and sunrise. Quibi will be able to tap into a phone’s internal clock in order to tell when it’s actually, well, after dark, and the show will be available to watch only during nighttime hours. At sunrise, After Dark will disappear like a bad dream.

While you could theoretically do something like this on a more traditional streaming app, viewers would probably rail against it. Something about watching videos in 10-minute increments of downtime makes it a little easier to stomach limited availability.

In the future, Quibi theorizes that it could take advantage of similar opportunities based on a user’s time of day, location or even speed of movement. One potential pitch involved an exercise program whose host would “know” if a viewer was moving or stationary, then recommend appropriate exercises accordingly.

But in Quibi, each program has two totally distinct edits: one for portrait, and one for landscape. Portrait mode might pan the camera to follow characters at a more intimate distance, while landscape can show you everything, all at once, but from farther away.

The most interesting application of this dual-edit system I saw was in a program called Front Door. This short thriller film featured a young woman in her home and an intruder at the front door (where else?) trying to get in.

In landscape mode, the film followed the woman’s every move, whether she was sitting on the couch, checking her phone or trying to secure all of her doors. In portrait mode, however, I saw whatever she saw.

Sometimes, it was a shot of the intruder through her doorbell camera; sometimes it was a frenzied phone call to her dad. You’d have to watch Front Door at least twice to take in all the details, and even then, no two viewing sessions would be the same.

To me, Quibi is still a 50/50 proposition. The streaming market is already pretty crowded, and young Millennials and Gen Z-ers seem pretty content with Snapchat, Tik Tok, YouTube and other platforms that give them short-burst content for free. On the other hand, they’ve never really had the option of premium 10-minute videos before, so perhaps Quibi will fill a niche that the audience didn’t even realize needed filling.

In his sociology book “Amusing Ourselves to Death” (Viking Penguin, 1985), author Neil Postman posited that television forced us all to inhabit what he called the “Peek-a-Boo World.” In the Peek-a-Boo World, media gave us just enough time to get in, get the germ of a story, and get out again, without ever really becoming too invested in what was happening onscreen – like a game of peek-a-boo with a baby. In a way, Quibi is the ultimate manifestation of Postman’s concept – whether the developers intended it or not.

As such, can a service like Quibi hold people’s attention for long? We’ll know for sure in early April.