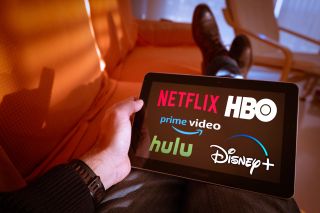 Each morning, I wake up, jump out of bed, trudge over to the bathroom and hit the showers. And when all that's done, I pick up my phone, scan the headlines and see that someone has just announced a new subscription streaming service.

Or so it seems, at any rate. This fall, a landscape that already features the likes of Netflix, Amazon Prime Video and Hulu will also host new rival services from Disney and Apple. NBCUniversal and AT&T (in the form of HBO Max) are warming up for their 2020 launches as well. And there are even other services in the works, probably forming right as I'm typing this sentence.

This surplus of streaming services poses a bigger problem than the likelihood that I'll transpose their names at some point. (Huflix? Disney Prime? HBO Mapple Plus?) With the exception of NBCUniversal's ad-supported streaming service, all of these outfits are expecting money — my money — in exchange for delivering on-demand content to my home.

And that's their right. But as a cord-cutter who cancelled his Comcast cable service a few months back and continues to bask in the glow of spending far less money on TV each month, I'm unwilling to see those savings get eaten away, bit by bit, as each streaming service tries to claim its slice of my discretionary income. I've got to decide which of these services are worth paying for. And I suspect you do, too.

I currently subscribe to Netflix, get Amazon Prime Video as part of my Prime membership and watch the ad-supported tier of Hulu, thanks to a complimentary subscription that comes with my wife's Spotify Premium account. I'd like to keep my streaming services budget at the $35 or so I’m currently paying out. So if any of these new services tickle my fancy, I'm going to have to figure out what to keep and what to drop.

At the end of the day, price is big decision driver here. After all, if you want to figure out which service is worth paying for, it helps to know how much each service is asking you to pay.

We're at a bit of a disadvantage here, because HBO Max, which is launching next spring, hasn't officially announced a price yet. We can assume that since this AT&T-backed service will feature original programming, as well as a library of TV shows and movies on top of HBO's content, that HBO Max is going to cost more than the $15-per-month you currently have to pay for HBO Now. That could make HBO Max the priciest of the services featured here.

Otherwise, Netflix is at the top of the price pyramid with its $13 monthly charge for a standard account. Hulu costs $12 if you pay up to drop ads, but you can get the monthly price down to $6 if you don't mind the more-than-occasional commercial interruption. Prime Video also costs $13 if you're going month-to-month on your Prime membership, but paying annually lowers that cost. You can also opt to pay $9 per month to get just Prime Video without the other Amazon Prime perks.

Consider what each service offers

OK, so we know what each services costs. But what do you get for that money? It's hard to give a definitive answer because movies and TV shows shuffle in and out of streaming services libraries all the time. (You can bookmark pages to find out what's new and interesting on the likes of Netflix, Hulu and Amazon Prime to save yourself some aimless scrolling, or turn to the Just Watch website to find out where the things you like are streaming.) That problem may become even more pronounced when the likes of HBOMax and NBCUniversal pull content off rivals such as Netflix to feature on their own services.

But though specific titles come and go, we know what each service offers in general. In additional to its original programming — more on that in a moment — Netflix features a library of movies, documentaries and TV shows. So do Amazon Prime and Hulu, with the latter service including many TV programs right after they air on broadcast TV. HBO Now features HBO's original programming and select movies, and so will HBO Max when it launches, along with TV programs and movies from WarnerMedia's vast library of content. When Disney Plus arrives, you'll find all sorts of programming pulled from Disney-owned properties like Pixar, Marvel and elsewhere. ESPN+, meanwhile, focuses on live sports and original shows.

What exclusive content can you find on each service?

Netflix seems to have blazed a trail with original programming, pouring big bucks into its TV shows, movies and documentaries. And for its efforts, Netflix has won Emmys, Oscars and critical acclaim. It's no surprise, then, that Hulu and Amazon crank out originals exclusives of their own, too.

Yet-to-launch services have gotten the memo. When Apple previewed its forthcoming Apple TV+ service, most of the presentation featured performers and directors parading across stage to tell you all about the original programming you'll be able to watch this fall. Disney Plus has outlined plans for original shows, too, and originals are also on tap for HBO Max next year. (Reese Witherspoon is producing a couple of films for HBO Max, and TV producer Greg Berlanti of Flash and Arrow fame is on the hook for some new shows as well.)

How you feel about each original show is going to affect which streaming service is near and dear to your heart. Big fan of Stranger Things? You're going to want to keep that Netflix subscription. Intrigued by The Marvelous Mrs. Maisel after its Emmy wins? Better look into Amazon Prime. Is The Handmaid's Tale more your speed? It's Hulu for you. Like all of those shows? Well, we're back to the problem of having too many streaming services, aren't we?

What other perks are there?

Sometimes, a few extras can tip the scale in favor of one streaming service over the other. Should you get Prime Video as part of your Amazon Prime membership, you also get all the attendant perks such as free two-day shipping, discounted prices on some goods, access to Prime Music and other bonuses. An ESPN+ subscription doesn't just get you live sports; you can also read articles on ESPN's website that are otherwise hidden behind a paywall.

We're focusing on services that offer on-demand programming, but if you also want to stream live TV, then you can pay up for Hulu's $45-per-month Hulu + Live TV tier. AT&T has suggested that live TV will be available through HBO Max — most likely as an add-on to the basic service — though we're still waiting for more details, such as pricing.

Using the above criteria should help crystalize what's important to you in a streaming service. And the nice thing is, the answers are going to be different for each household.

Speaking just for myself, few of Netflix's originals really grab me. (Though I dare not tell my daughter, who's obsessed with Nailed It.) I appreciate that Hulu picks up some of the shows I used to record back when I had both cable and a DVR — it's how I stayed on top of Brooklyn 99 this past season. The two things I miss about not having cable are classic movies and sports. Most streaming services fall down on the job when it comes to movies released prior to the year 2000, but Prime Video seems to have the best mix of old and new. As for live sports, I'm eyeing ESPN+, especially now that the big European soccer leagues are back in action for a new season.

My decision was further solidified this week when Disney announced a compelling bundle of Disney Plus, Hulu (with ads) and ESPN+ that will be available for $13 this fall. That's a $5 savings off what subscribing to each service separately would costAnd since I'm already subscribing to one of them with an eye toward adding another, picking up Disney's vast library of movies, TV shows and originals seems like a no-brainer. Netflix and those Stranger Things punks are living on borrowed time, at least in my house.

So, no: As it turns out I don't need the government to step in and eliminate three streaming services at random. By breaking down what each service offers, I can pretty much take care of that myself.