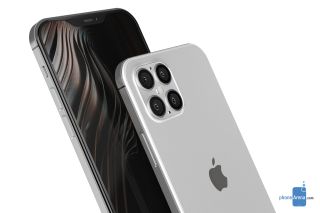 The iPhone 11, 11 Pro and 11 Pro Max are hot off the presses, but rumors about next year's iPhone 12 are already swirling. From 5G connectivity to a new time-of-flight sensor (for better augmented reality experiences), we already know quite a lot about the iPhone 12 — except what the trio of new phones will look like.

But PhoneArena took the rumors (and some creative license) to make new renders of the iPhone 12's design. As you can see below, the iPhone 12 could harken back to the iPhone 4 with sharper edges, a design element Apple also brought back to the iPad Pro and new MacBooks.

We all love and miss the iPhone 4, a pinnacle of smartphone design, but there are some elements in these renders that don't ring true. For one, the ToF sensor probably won't resemble a camera lens, as it appears in the image above. The sensor will likely be smaller.

Then there's the display, which still features a notch. Rumor has it that Apple is working to build Face ID into the top bezel and eliminate the notch for a fully edge-to-edge display.

According to PhoneArena, Apple is also exploring a smaller notch for the iPhone 12, which is what the blog featured in its concept.

It's still a little early in the rumor cycle for these renders to be accurate, but if the iPhone 12 is a throwback to the iPhone 4, we wouldn't be mad about it.