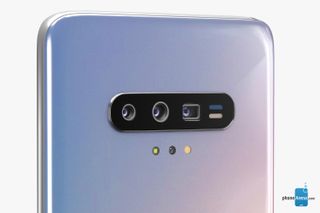 Samsung’s Galaxy S11 will likely be one of the first major smartphone releases of 2020. Despite the fair amount of time between now and then, we’re starting to hear some rumors about the phone’s features, including today’s news about the display.

A benchmark taken on HTML5test (via Galaxy Club and SamMobile), a site designed to test how well browsers and devices run advanced web features, shows a Samsung device with the ID number SM-G416U running on Android 10.

Clicking on the result shows the device has a resolution of 854 x 384, a 20:9 display ratio. We can ignore the first of the two numbers, as it is apparently a quirk of the benchmark and does not accurately indicate the resolution of the panel.

The display ratio from the test results means that if this is the S11, that it would be taller than the Galaxy S10, which hopefully means a larger total screen size and hopefully a higher resolution, too. Samsung already sells phones like the Galaxy A70 and A80, which both use this aspect ratio, so a phone of this shape would not be unprecedented for the company.

The display of the S11 has attracted a lot of attention already for the possibility that it may also make the jump to 90Hz like the OnePlus 7T or the newly announced Google Pixel 4. The irony is that despite making 90Hz displays for OnePlus, Samsung has yet to implement its own company’s technology on its phones. It’s widely expected and hoped that Samsung fixes this for the next generation Galaxy S series phone.

Another Galaxy S11 design rumor has Samsung possibly hiding the front camera so that the cutout only appears when the selfie camera is operating. This would achieve a true full-screen design without the punch hole on the Galaxy S10.

The Galaxy S11 is also expected to boast a brand-new camera sensor that could go up to 108MP with 5X optical zoom, as well as 5G connectivity on more than one model. Check out our Galaxy S11 rumors hub page for everything we know about the future Samsung device.