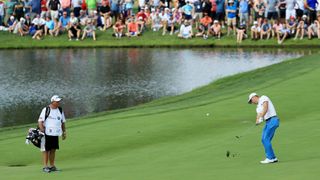 Forty-six tournaments later, the PGA Tour season is coming to an end. The 30 remaining players are teeing off at Atlanta’s East Lake Golf Club today for a chance at the coveted Player of the Year title (and multi-million dollar prize). Because this is major televised sporting event, there's coverage available on multiple networks, but it's also easy for fans to watch the rounds as they unfold elsewhere with a Tour Championship live stream.

This year’s match looks a lot different thanks to the Championship's new "starting strokes" format. Any of the 30 competitors can win, which was never the case before. World #1 Brooks Koepka has the lead, but he still has a full round ahead of him.

Here are all your options for watching the Tour Championship, including the best VPN to use if you find yourself traveling during the tournament.

When are the tee times for the Tour Championship?

The final round of the Tour Championship is underway right now!

The players with the lowest score, Rory McIlroy and Brooks Koepka, tee off at 2:10 p.m. ET (11:10 a.m. PT). Pairs will tee off at ten minute intervals until then.

Which channels carry the Tour Championship in the U.S., UK and Canada?

Today coverage will start on the Golf Channel and then switch to NBC after an hour and a half.

In the UK, the Open Championship airs on Sky Sports Golf. Viewers without a Sky Sports subscription can opt for a Now TV Sports pass, which costs £8.99 per day.

Canadians can watch the final two rounds of the Tour Championship on TSN.

How can I use a VPN to live stream the Tour Championship?

If you're traveling and unable to catch the Tour Championship through your regular channels, a virtual private network, or VPN, can come to your rescue. With a VPN, you can appear to be surfing the web from your home country, allowing you to pick up content from streaming websites that would otherwise be restricted.

We've tested many different services, and we've found that the overall best VPN is ExpressVPN. Its superb speeds will meet the needs of most users, and it offers excellent customer support. Still, there are other options available. Here are the three VPNs we recommend the most.

The best overall VPN will set you back from only around $6 for a monthly subscription, thanks to a 49% discount and 3 months free with an annual subscription. Still not sure? ExpressVPN also offers a 30-day money-back guarantee if you're not satisfied.

ExpressVPN stands out as the very best option out there thanks to its speed, security and sheer simplicity to use. Whether you've used VPNs before or are completely new to them, ExpressVPN is a fantastic choice.View Deal

A month with NordVPN costs $11.95, though as with other VPN services, the rate drops if you commit to a longer period of service. If you're particularly obsessed with privacy, you may want to do that with NordVPN: it uses 2084-bit encryption, and it's also easy to use with streaming services.View Deal

Performance was only average with TunnelBear in our tests, but the reason to get this service is that it's pretty simple for novices to use, and its monthly service only costs $9.99.View Deal

How can I live stream the Tour Championship?

The one catch to watching the Golf Channel or NBC Sports online is that you’ll need to sign in with login info from your cable or satellite TV provider. (The Golf Channel website does give you a free 10-minute preview.) So if you've ditched your cable TV subscription, forget about live streaming that way.

Instead, you can check out our Championship streaming options on fuboTV, DirectTV Now, Sling TV, and PlayStation Vue.