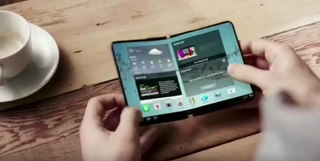 Samsung is preparing its foldable smartphones for partners, who will get to see the device this year and determine whether it has market appeal, according to a new report from Korea's ET News. If all goes well, Samsung plans to make the foldable smartphone available to customers in 2018, ET News says, citing sources.

For years, there's been talk that Samsung was working on a smartphone featuring an entirely foldable display. Some reports have suggested the handset could come with what amounts to a hinge in the middle of its screen that would allow you to fold it up and stick it in your pocket. Still others have said that the device could double as a tablet and unfurl to 7 inches when its screen was fully extended.

MORE: How the Galaxy S8's Coolest Feature Will Work

The big question on everyone's mind, however, is whether such a device can succeed. According to most concepts, the handset's face would be entirely covered by the touchscreen, leaving no room for a bezel. The folding feature would reduce its size and make it easier to fit in your pocket.

According to the ET News report, which was earlier discovered by Business Insider, Samsung will release "thousands" of units this year to its mobile industry partners to see whether they believe the concept has commercial viability.

According to the report, Samsung showed the concept to a few partners at Mobile World Congress last month. Their reaction must have been positive enough for the company to take this next step.