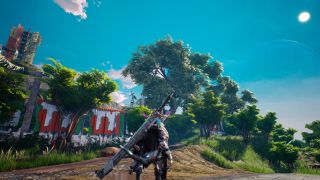 The surprise hit out of the Gamescom video game show in Germany is Biomutant, an open-world RPG by THQ Nordic with kung-fu elements and a post-apocalyptic setting. We know very little right now, but what we've seen so far is promising.

The game stars a raccoon-looking creature, and the game's web site says offers the following plot summary: "A plague is ruining the land and the Tree-of-Life is bleeding death from its roots. The Tribes stand divided, in need of someone strong enough to unite them or bring them all down[.]"

What is that raccoon thing?

We assume that's the biomutant the game is named after. More importantly, it's your character. Throughout the game, you'll be able to change its abilities and looks with mutations, new gear and bionic prosthetics. The options include robotic legs, growing wings, adding claws, and more, which change how the creature fights.

According to THQ Nordic, Biomutant features a dynamic melee system that allows you to freely string together shooting, melee attacks and special powers as you see fit (think Devil May Cry or Bayonetta). You'll be able to craft all kinds of crazy weapons, and can equip a variety of gear pieces that protect you from environmental hazards or give you special boosts.

The game takes place in a freely explorable open world, which you'll be able to traverse "by foot, mech, jet-ski, air-balloon and more." The game's website also notes that your choices and actions have an effect on the story. Considering that Biomutant was developed by some of the folks behind open-world titles such as Just Cause and Mad Max, we have high hopes for how this one will play.

When does the game come out?

Biomutant is scheduled to release in 2018. An Amazon listing says it will be $60 on PS4, Xbox One and PC and come out on December 31, 2018, but that's probably just a placeholder date.

When will we get more information about Biomutant?

The game's next stop is at PAX West in Seattle from Sept. 1 through Sept. 4, where we hope to see some more gameplay footage.