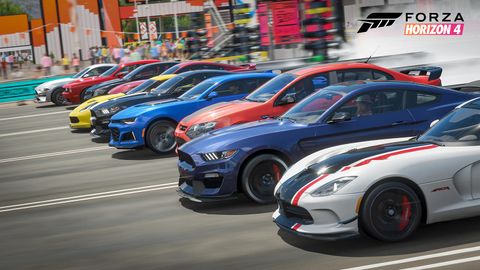 Forza Horizon 4 takes the beloved arcade racing series to new heights with a stunning new open-world and endless activities, goals and play styles to keep you coming back for more.

The old adage goes that you can't be everything to everyone. Pleasing all of the people all of the time is impossible, a jack-of-all-trades is a master of none, and if you want to succeed, the secret is to do one thing really well — lest you spread yourself too thin and lose the plot.

At this point, I've toppled seemingly every dry stone fence in the Forza Horizon 4's U.K. countryside, embarked on an epic journey from the Cotswolds to Edinburgh that wouldn't look out of place on a certain BBC motoring show, slid and scurried across a frozen lake and bounded through the muck and mire of countless Welsh bogs. And if I'm sure about anything, it's that nobody at Playground Games has ever heard any of those tired aphorisms.

Forza Horizon 4 dreams big in a way racing games rarely do anymore. Sure, the map's massive and there are hundreds of endlessly modifiable cars, but what makes Horizon stand out isn't simply the breadth of its content — it's the life of its world, and the understanding that you are in command of your own destiny every time you step in it.

While previous entries in Microsoft's arcade racing franchise have been set in Colorado, France and Australia, for the fourth installment the Horizon Festival heads to the United Kingdom. At the outset, that choice might seem relatively unimaginative, but very quickly you realize how it plays to the game's favor.

First, Warwickshire-based Playground Games isn't ashamed to admit that Horizon 4 isn't merely a love letter to the home of motor racing — it's a love letter to home, period. The map is 52 square miles wide, which makes it about as large as Horizon 3's Land Down Under. But not a single space of this world is wasted.

I was fortunate enough to spend a few months in Brighton while I was in college, and there's a certain familiarity to the environment Playground's created. But I don't think you need to have had an experience like mine to get that sense. This is a lush, inviting world, with an attention to detail that I surmise could be achieved only by people who have a deep understanding of the source material. Although I'm sure it's a somewhat idealized version of the U.K., it manages to stay authentic. There's a thrill to blasting down narrow public roads, kicking up leaves in the autumn as you slither through rolling green pastures dotted with cottages, castles and, of course, an excess of roadwork.

One of my biggest gripes with one of Horizon 4's contemporaries, The Crew 2, is that so many of your journeys in that game are spent on sleep-inducing highways between city centers. And once you get to your destination, what you find is a Bizarro-esque approximation constructed by aliens who have never actually been there. Horizon 4 thankfully avoids this problem — partially because its world is better designed, and partially because players have to re-learn it every week in a sense, when the seasons change.

There’s a thrill to blasting down narrow public roads, kicking up leaves in the autumn as you slither through rolling green pastures dotted with cottages, castles and, of course, an excess of road work.

The map cycles through winter, spring, summer and fall on a weekly basis. It's a first for the franchise, and every transition brings major changes, both in aesthetics and in gameplay. Winter especially forces you to attack certain areas differently, as it functionally turns the environment into a gigantic snow rally. You might find that your McLaren Senna isn't quite as maneuverable when there's a layer of ice scrambling the friction between your rear tires and the road surface, and you'd be better served with one of the many high-riding hot hatches that enthusiasts in this part of the world tend to like so much.

Eventually, you'll have to pull yourself away from the thrill of exploration, start earning some cash and begin plying your trade at the Horizon Festival. And, boy, there are so many ways to ply.

Of course you could run the festival-sanctioned events, but there are also street races on the open road, rally stages, cross-country raids, drift competitions and the like. And beyond all that, Horizon 4 allows you to moonlight as a stunt driver, a cabbie or, on one occasion, Master Chief himself.

However you prefer to act out your automotive fantasy, Horizon 4 will not only encourage you to do it, but turn it into a trade.

Once you finish the single-player prologue, the game thrusts you onto its always-connected community. You'll casually pass other drivers while free roaming, and Microsoft says the servers are equipped to handle 72 players in the same world at once. You can partner up with a couple of friends and set off on team-based adventures that offer serious prizes for completing common goals. There are Rivals events that mimic Driveclub's asynchronous challenges for fastest lap times, car clubs where players can congregate around shared passions, and an auction house where gifted artists will find yet further ways to earn their dues.

However you prefer to act out your automotive fantasy, Horizon 4 will not only encourage you to do it, but turn it into a trade. And while it's normal to find yourself a little overwhelmed every now and then, the game does a decent enough job of keeping you on task when you want to be, thanks to a digital assistant called Anna that can be summoned at a moment's notice to give you an objective based on what you're looking to achieve.

Don’t let the carefree vibe and flashy arcade thrills fool you, though, as Horizon 4 is needlessly complicated at times. Even when free roaming, you accrue Skill Score — a form of experience that, as far as I can tell, builds up when you do literally anything. Hit your top speed, your score increases. Pull off a drift, you get some more. Even running into things — something that requires literally no skill at all — rewards you with numbers that plug into other numbers and spit out Skill Points, which can be redeemed for perks on a per-vehicle basis.

Note that Skill Points aren't the same as Influence Points, something you earn by — among other things — streaming on Mixer (how's that for shameless cross-promotion?). The PR Stunt challenges have their own currency as well, and, ultimately, if you do all the things, you level up, which unlocks more events.

MORE: How to Stream to Twitch

The problem with being reinforced with a flurry of meaningless numbers for every trivial action is that it kind of devalues all your achievements. I finished 11th in one race, only to be lauded by one of the event organizers for my finesse behind the wheel, given a hefty sum of cash and somehow awarded enough XP to level up. In those moments, it feels like the game just isn't listening.

My best advice to anyone starting out in Forza Horizon 4 is to simply ignore all of that mathematical noise. The game is set up in a way where you physically cannot play it without progressing, so you're better off strapping yourself into your favorite ride and letting the numbers sort themselves out.

In fact, I'm confident your favorite car is in Forza Horizon 4, because there are more than 450 models available before you get to the DLC. And they run the gamut from '60s prototype Le Mans death traps to classic Ford hot rods, state-of-the-art hypercars, seemingly indestructible pickups and, of course, the tragic three-wheeled Reliant Robin. They all drive quite nicely, too (well, except for the Robin), because unlike other arcade racers, Horizon's physics engine is built off the bones of Forza Motorsport's expertly tuned handling model.

That doesn't make Horizon 4 the kind of punishing simulation that would intimidate Project Cars veterans, though it does mean you can somewhat tailor the experience to your preferred degree of realism. Rest assured, you'll never be dancing on a knife's edge trying to control any of these cars. However, there's enough feedback through the steering and nuance to the weight transfer that the physics still feel rich, rewarding and believable, even if they aren't necessarily realistic.

Ultimately, it's an experience that works because of its accessibility. The Horizon series has long been one of those few racers that transcends the niche reputation of the genre and manages to be universally entertaining. I can easily see all of my friends flirting with the explorative nature of the game without the difficulty of taming those mechanical beasts turning them away. At the same time, there's enough depth here for seasoned drivers to get their kicks, too.

It helps that Horizon 4 is a thoroughly beautiful affair, especially for an open-world game. Playground cut no corners here; every little detail is a sight to behold, from water pooling in puddles on gravel roads, to the exquisite textures of the cars' interior trim, to the way trees filter sunlight when springtime hits. You'll delight in the way competitors block the projection from your headlights during night races, and become entranced by the flares that mark checkpoints reflecting off all that sheet metal.

Forza Horizon 4 is locked at 30 frames-per-second on the standard Xbox One, but playable in two modes on Xbox One X. There's a "Quality" 30 FPS setting that outputs in native 4K, and a "Performance" 60 fps option that scrubs some of the finer details for a faster frame rate. The game is playable on PC as well, via Xbox Play Anywhere. For this review, I used an Asus ROG Zephyrus laptop to experience the game on Ultra settings.

Additionally, it's important to note that Horizon 4 is included in Xbox Game Pass at launch, which is a huge boon for subscribers of the $10-per-month service.

It wasn't long ago that Forza Horizon was the odd spin-off to Microsoft's golden racing franchise that seemingly came out of nowhere. Six years later, it's practically carrying the torch of the arcade racing genre single-handedly.

That's not to say there aren't alternatives out there, but regarding quality and quantity of content, the only racer that approaches Forza Horizon 4 is, well, Forza Horizon 3. This is the next "default" racing game — the title anyone who has a passing interest in going fast should purchase, and the benchmark that The Crew and Need For Speed will continue to be weighed against.

Much like its predecessors, Horizon 4 earns that reputation because it does practically everything well. It works as a solitary experience, but flourishes with a group. It's fun purely to drive, but also offers unparalleled customization for creative types, and an assortment of activities outside of being first to the finish line. It's approachable, but never watered down. Quite simply, Horizon 4 is whatever you want it to be. And how many racing games can you say that about?