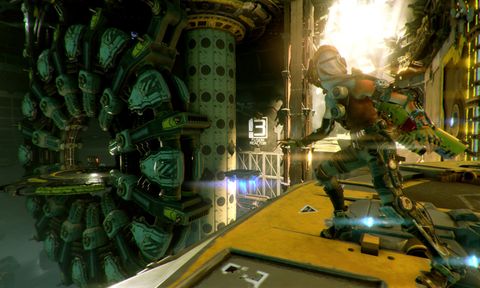 ReCore is a competent shooter and platformer, but long load screens and brutally short play-through weigh it down.

ReCore has enjoyed a modicum of hype since it was unveiled at E3 2016 in June. Created by the legendary Keiji Inafune (Mega Man, Dead Rising, Mighty No. 9) and Armature Studio (home to the developers of the excellent Metroid Prime series), how could it not?

At its heart, ReCore is a fun, charming third-person action-adventure game that serves up the arcade-style shooting mechanics and exploration of Metroid with a new coat of paint. But the overall experience is dulled by a short campaign, repetitive gameplay and unbearably long waiting times. It's the latest lesson on why some nostalgia is best left in the past.

Skynet, Ex Machina, HAL — when will we foolish humans learn that combining artificial intelligence and robots is a recipe for human comeuppance? In ReCore, after a devastating illness has wiped out more than a third of the world's population, humanity has set its sights on the distant planet of Far Eden. A barren world made up of roving sandstorms, Far Eden does have plenty of resources to make Corebots, robots that will help their human companions terraform the planet into something more suitable for people.

An advance party of humans and Corebots set out to work on building humanity's new home. However, while they do so, something happens to the biggest, most powerful Corebot on the colony. Its affliction soon spreads to most of the other Corebots.

This leads to a Corebot revolution, during which all humans on the planet are annihilated — except for Joule, our protagonist. Joule is the daughter of one of the colonization plan's leading scientists, and her discovery of a new power source may be the key to quelling the revolt and saving humanity.

Honestly, outside of two plot twists, I sussed out most of the story after about 20 minutes of playing. While I got a measure of satisfaction from forecasting the plot, I also enjoyed fleshing out the story with the random audio logs placed throughout the world — and smashing rogue Corebots to pieces.

When you start ReCore, Joule will have one Corebot companion: a canine called Mack. Over the course of your journey, you'll pick up several more companions to help you fight your way through Far Eden. While I won't give away all of the Corebots and their respective powers (because where's the fun in that?), I'll give you a little insight into how companions operate.

Each Corebot Companion has a set of skills to help Joule in her quest, in and out of battle. Mack, for example, can dig up all sorts of interesting bric-a-brac in the vast desert. In battle, depending on which frame you have equipped, Mack has a lethal skill called Dash that can help even the odds against bigger foes.

Some of your future companions will have abilities necessary for accessing certain parts of the map. You can have two bots on your team at a time, so you'll have to plan accordingly. Although you can cycle between your two teammates with a quick tap of the right shoulder button, it would have made more sense to let players access all of the Corebots at will instead of making them return to the Crawler or Fast Travel location to make adjustments. It's an inconvenient way to force you to return to previous areas to access everything.

As I stated previously, Far Eden is a sprawling desert, complete with bone-white sand, crystal-blue skies and the occasional ruin of a failed colony sprinkled here and there. However, there's beauty to be found in the desiccated landscape, with its swirling winds and dank, dark colors. My favorite stage was a refining factory of sorts where toxic ooze glowed a noxious green among jagged black crystal.

However, most of Far Eden's color comes from Joule and the Corebots as they battle for the planet's future. The animation has a Pixar-like feel to it, particularly when it comes to the cutscenes. When you're in the heat of combat, switching between modes, the screen explodes in a glorious cavalcade of rich color.

But you'll be spending a lot of time in the game's dungeons. Available in three flavors — Adventure, Battle and Traversal — each dungeon offers moderate platforming, waves of battling robots, or both. Adventure dungeons tend to be tied directly into the story, while Battle and Traversal tend to be optional side tasks that yield decent loot. However, because the same objectives are required to complete nearly every side dungeon, it soon became an exercise in patience and repetition.

Far Eden is made up of vast areas with secrets and dungeons scattered throughout. That would normally be fine, if I had a vehicle of some sort to cover all that distance. But, alas; outside of some sparse Fast Travel points on the map, most of my travels took place on foot, which made for slow going.

It's a double-edged sword. On one hand, traveling on foot brings home the vastness of the game. On the other, it feels like a cheap, badly concealed ploy to pad the game with more hours than necessary. Even worse is that you can't set a waypoint on the map, which forced me to constantly look at the map to make sure I was on the right track.

A Game of Color-Coded Tug-of-War

ReCore's gameplay mechanic is pretty straightforward, for the most part. Corebots attack, and you smash them and collect their various parts for use on your own companions. Wash, rinse and repeat. That's not to say that it's not entertaining. In fact, I played for 12 hours straight without a hint of boredom.

However, before you take on that horde of mechanized horror, be sure you scout out their colors. Attacking a robot with its corresponding color deals way more damage than attacking with a clashing hue. So if you see a red bot, switch to red. The same goes for yellow, blue and white. You'll discover color enhancements for your trusty laser rifle as you progress through the game.

Switching between colors is as easy as pressing the color's designated position on the D-pad. Throughout the course of the title, you'll run into hybrid bots colored purple, orange or green. Don't panic — that just means you can blast them with either of the two colors that create that color. So if you're confronted with a green enemy, feel free to open up some yellow- or blue-tinted devastation.

Lastly, you have two ways to finish off your foes. You can either blow them to bits or extract their cores. The first method is pretty simple: keep blasting until they blow up, which yields you a few parts and core shards that can be repurposed for your own bots.

Extraction takes a bit more finesse. After weakening your target, you'll see an extraction prompt. From there, you lock on and tap the right analog stick, unleashing your extractor. Now you're playing a rather grueling game of tug-of-war with an angry robot, pulling and giving slack until someone wins.

If you win, you get the bot's core, which can greatly enhance your team's power. Ultimately, both methods are required in order to get the necessary parts for any meaningful upgrades.

In practice, the gameplay is a practice in contained frenzy — especially during boss battles, where you're trying to whittle down groups of minions while avoiding myriad attacks.

The suit makes the Corebot

As you make your way through ReCore, you'll discover that Joule's gun and your bots level up. Outside of the color mods, you never have to worry about customizing your rifle. Your Corebots, however, are another story. Exploring the various dungeons and open spaces of Far Eden will net you blueprints for a variety of frames for your companions that enhance their core stats in a variety of ways.

If you have the necessary components, you can create the new gear in the workshop, located in Joule's base of operations. You can also use the cores and core shards you've obtained to boost your bots' base stats, as well as craft materials needed to build more powerful frames.

Welcome to the era of Play Anywhere

ReCore is the first title to take advantage of Xbox Anywhere, the new initiative that lets gamers play on either a console or a Windows 10 PC. Setup was a rather painless affair; I just launched the Xbox app on my Alienware 13 gaming laptop and signed in with my console credentials.

From there, I chose ReCore and got as far as the Fast Travel screen before the game froze. I had several unsuccessful attempts before I threw in the towel. Before I returned to my console, I did manage to get a single minute of play at 1920 x 1080 at 30 frames per second.

Here are some things I did while waiting for ReCore to load: played a few rounds of Futurama: Game of Drones, one of my favorite time-killing apps; read articles on The Undefeated and Jezebel; and scrolled through my Facebook feed. This is 2016, and there's no reason for load screens to be as time-consuming as these. It took 1 minute and 28 seconds for the system to load my game from the start screen. Fast Travel between points on the map wasn't much better, at 1:15.

If you were looking for a game to fill that Metroid Prime-size hole in your heart, ReCore isn't it. Although it features a strong female protagonist wielding a kickass energy rifle with a crew of robots and moderate levels of platforming, ReCore is held back by a threadbare, somewhat predictable story; repetitive gameplay; and shameless padding. However, if you're looking for a relatively inexpensive game for 8 to 10 hours of robot-blasting action, ReCore might be up your alley.