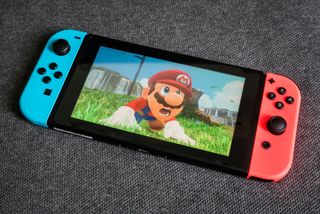 Mario Day has come and gone, but don't tell that to Walmart. The retailer is still celebrating our favorite Goomba-stomping plumber with discounts on Nintendo Switch bundles.

For a limited time, Walmart will let you build your own Nintendo Switch Mario Bundle for $329.99. Each bundle includes a Nintendo Switch console, a Mario game of your choice, and Power A Super Mario collector pins. The console alone normally retails for $299 and the games and pins sell for $60 and $5, respectively. So you're saving about $34 with this bundle. Deals include:

In our Nintendo Switch review, we were impressed by the console's versatility, solid build, and easy setup. Although its controllers can't be charged separately and its screen is reflective in the sun, the Switch's ability to transform on the fly makes it totally worth buying. It's the perfect console for mobile gamers.

Rakuten is also celebrating Mario Day with their own Nintendo Switch bundle. Currently, the online marketplace offers the Nintendo Switch Console with a 12-month Nintendo Switch Online Plan for $275.95. Normally, this Switch value pack would set you back $325, so that's $49 off.

These deals are for a limited time, so act fast to get one of our favorite consoles on sale.