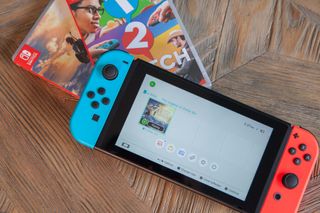 So whether you want to outfit your gaming set up with an Alienware rig, Xbox One, PS4 or Switch console or if you're just looking to stock up on games, you've come to the right place. We're hand picking and listing all of the best gaming deals you can get right now.

Plus, make sure to check out our PS4 deals, Xbox One deals, and Nintendo Switch deals roundups for platform-specific discounts.

Sony PS4 Pro 1TB Console: was $399 now $305 @ Walmart
The PS4 Pro is Sony's 4K-capable gaming console. It's also the only console out there that offers VR support. View Deal

Call of Duty: Modern Warfare for PS4: was $59.99 now $44.99 @ Walmart
In Call of Duty 4: Modern Warfare, players will experience an immersive narrative spanning the entire game. Get 3 Hours of 2XP when you buy it at Best Buy. The Xbox One version is also on sale for the same price. View Deal

Hyper X Cloud Flight Wireless Gaming Headset: was $139.99 now $99.90 @ Amazon
The HyperX Cloud Flight is one of the most stylish and comfortable gaming headsets you can get. It works with PS4 and PC and is now $40 cheaper at Amazon. View Deal

Sony PS4 Camera: was $59.99 now $40 @ Amazon
This camera lets you automatically log onto your account and navigate your PS4 via voice control.

Nintendo Switch (Refurbished): was $299 now $259.99 @ Nintendo via eBay
If you don't mind buying a refurb, you can get a professionally restored Nintendo Switch console direct from Nintendo's eBay store for $30 cheaper. Your purchase is backed by Nintendo's warranty. View Deal

Star Wars Pinball for Nintendo Switch: was $29.99 now $19.93 @ Walmart
This Star Wars pinball game features iconic characters, locations, and themes from the franchise. Choose from 19 pinball tables or challenge yourself in Career Mode. Own it now for $10 off. View Deal

Mortal Kombat 11: was $59.99 now $29.99 @ Walmart
MK11 is the biggest, bloodiest, and best Mortal Kombat yet. This latest installment of the series features an overhauled fighting engine and an immersive story mode. Get it now for 50% off at Walmart. Amazon also offers this deal. View Deal

Yoshi's Crafted World: was $59.99 now $49.99 @ Amazon
Jump into a new Yoshi adventure in a world made of everyday objects—like boxes and paper cups! Get it from Amazon now and save $10. View Deal

Hestia Goods Nintendo Switch Carrying Case: was $25.99 now $11.39 @ Amazon
This hard shell protective case will keep your switch and accessories organized and safe. Amazon has it on sale for $15 less than its regular price via in page clickable coupon. View Deal

Starlink: Battle for Atlas Starter Pack: was $59.99 now $5.99 @ Best Buy
In this exclusive Switch Play game, Team Star Fox joins the battle as the adventurous Fox McCloud. For a limited time, it's just under $6 at Best Buy. View Deal

SteelSeries Rival 710 Gamer Mouse: was $99 now $73.99 @ Amazon
The Rival 710 features a customizable OLED, tactile vibration, and Discord chat integration. Now $28 off, it's one of the best gaming mice money can buy. View Deal

Xbox One X Star Wars Bundle: was $499 now $349 @ Amazon
This bundle includes a 1TB Xbox One X console, an Xbox wireless controller, and a full-game download of Star Wars Jedi: Fallen Order Deluxe Edition. Get it now and save $150 at Amazon.View Deal

Xbox One S All Digital Bundle: was $199 now $149 @ Walmart
This Xbox One S bundle gets you a 1TB game console and three games: Sea of Thieves, Fortnite Battle Royale, and Minecraft. Own it now for $50 off its regular price. View Deal

Mortal Kombat 11 for Xbox One: was $59 now $23.66 @ Amazon
Mortal Kombat 11 is the biggest, bloodiest, and best Mortal Kombat yet. This latest installment of the series features an overhauled fighting engine and an immersive story mode. The PS4 version is also on sale for $28.View Deal

Gears 5: was $59.99 now $36 @ Amazon
If you want to add a new big, beautiful, and bold game to your library, Gears 5 is your best bet. Amazon currently has Coalition’s new third-person shooter on sale for $23 off. View Deal

NBA 2K20 for Xbox One: was $59 now $36 @ Amazon
NBA 2K20 is the ultimate basketball simulation game. This year's enhanced MyCareer mode packs a star-studded cast including Idris Elba, Rosario Dawson. And for the first time, all 12 WNBA teams and over 140 players are in the game and ready to run in Play Now and Season modes. The PS4 version is also on sale for the same price. View Deal

WD Elements 8TB: was $179.99 now $129.99 @ Amazon
From high-res photos to 4K video files to massive game downloads, you'll benefit from the extra wiggle room the WD Elements drive has to offer. Grab one now for $50 off its regular price.
View Deal

Xbox Game Pass Ultimate: was $15 now $1 @ Microsoft
For one low monthly fee, you get Xbox Live Gold and over 100 high-quality games. For a limited time, discover new favorite games for just $1 a month for 3 months.
View Deal