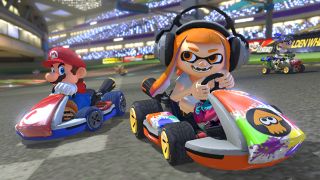 Except for some cheap classics, I’m usually loath to buy a game a second time. Sure, a remaster might look nicer or have a few more characters, but I’ve already seen the meat of it, and a little extra content often isn’t worth the full price of entry all over again.

Unlike a lot of re-releases, Mario Kart 8 Deluxe feels like it was painstakingly made to feel fresh. New characters are available, including King Boo, Bowser Jr., Dry Bones and Splatoon’s Inkling Boy and Inkling Girl.

Perhaps the biggest change is the completely overhauled Battle Mode, which felt tacked on in the original release. There were no Battle-specific tracks on the Wii U, and there was just one game where you popped your opponents’ balloons with attacks.

Now, there are five different games in Battle Mode: Balloon Battle (starting with five balloons instead of the typical three), Bob-omb Blast (same as Balloon Battle, but only with Bob-ombs), Shine Thief (capturing the Shine Sprite and attempting to hold it until the clock runs out), Coins Runners (collecting more coins than anyone else) and Renegade Round Up (Cops and Robbers, but for Mario Kart).

There are also six unique tracks developed especially for Battle Mode that you’ll only see in this version. They include new tracks, like the space-based Lunar Colony, and adaptations of old courses, like Luigi’s Mansion from the Gamecube or the classic Battle Course 1 from the Super Nintendo.

There are also two new items: Boo, a ghost that steals items during races, and the jumping feather, a Battle Mode exclusive that lets you jump over enemy attacks, like bananas and shells.

The big changes to gameplay are that you can now hold two items at the same time, giving you a backup when you fire a salvo. You can also race in the 200cc race class that was previously a downloadable feature for the Wii U. Finally, there are three new vehicles, two of which are based on Splatoon.

Mario Kart 8 is easily the most accessible game in the series. Every character is unlocked from the start, as are all of the courses. As soon as you turn on the game, you’ll be able to pick from 42 characters, including all of the downloadable players for Wii U, like Link from The Legend of Zelda, Dry Bowser, both Animal Crossing Villagers, Tanooki Mario and Cat Peach.

All of the courses from the original game and DLC are automatically available to you as soon as you get the game, including content that cost extra on the Wii U.

If you’re playing with a novice racer (and you assuredly will, as everyone will want to see a favorite franchise on your Switch), they’ll appreciate Smart Steering, which keeps you from falling off the track and provides auto-acceleration so you can focus on driving and attacking.

MORE: Where to Buy the Nintendo Switch

What delighted me most about Mario Kart 8 Deluxe was that despite the original being released for the Wii U three years ago, it feels like you’re playing it for the first time on the Switch.

In fact, while playing the game, I found some of Nintendo’s original promises for the Switch coming to life. While you could previously use the Joy-Cons as separate controllers in Super Bomberman R and Snipperclips, this is the first game where others I played with were super- excited to jump in quickly.

Two colleagues and I sneaked a few games into our labs (don’t tell my editors), with the Switch propped up on its kickstand, and we were as giddy as schoolchildren. The same thing happened when I played with my girlfriend on a TV. It felt like the trailers Nintendo showed for the system -- a promise coming true.

And the game looks better than ever, too. It’s crisp and colorful on the Switch’s display, even at 720p. When I played as Donkey Kong in Balloon Battle, I was surprised to see so much detail in his fur. Pop the Switch into its dock, and the game outputs an even more beautiful 1080p. You can play with two players on the Switch itself or four players on a TV. Alternatively, eight Switches can hook up wirelessly for more friends to play.

Mario Kart 8 Deluxe lets you play online, but it’s not a marked improvement from what the Wii U version offered three years ago. Up to 12 players can pick between races or Battle Mode online, but it feels stuck in Wii U territory. There’s no voice chat in the game (Nintendo isn’t launching its online lobby and voice chat app until the fall), so you’re stuck with canned messages that you can only use between races. In the fall, when Nintendo’s free trial ends, you’ll have to pay for the Switch’s online services to use this mode.

So, Should I Get This Game Again?

It hit me when I was playing Mario Kart 8 on the subway and the woman sitting next to me didn’t try to hide that she was watching me race: This doesn’t feel at all like a port. It’s how it should’ve been designed the first time.

In fact, Mario Kart 8 Deluxe feels like it fulfills many of the promises that Nintendo made about the Switch. It shows off the system on the go, on a TV and with friends.

There’s also enough content for hardcore Nintendo fans to come back for, especially because it makes up for the poor Battle Modes from the Wii U version with a complete revamp.

The only people I might hesitate to recommend this game to are those who bought not only the original game on the Wii U, but also every bit of DLC. For them, Battle Mode is the biggest change, so the decision hinges on how much you want those multiplayer experiences.

If you’re looking for a party game to show off to your friends or a racing game to master, Mario Kart 8 Deluxe more than fills that niche on the Switch.