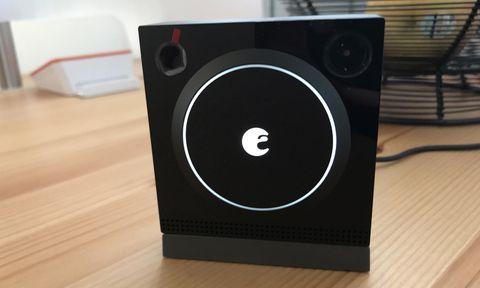 On its own, August's Doorbell Cam Pro is a solid device, and it's even better when integrated with August's Smart Lock Pro and other smart home platforms.

August's Doorbell Cam Pro can be the gateway to a larger smart home system, since it easily integrates with the August Smart Lock Pro + Connect kit, which is compatible with a wide range of smart home systems. But even on its own, the August Doorbell Cam Pro is a great doorbell camera, with easy installation, good video quality and the best-designed app. It's why we consider it one of the best video doorbells you can buy.

The Doorbell Cam Pro replaces an existing wired doorbell, which has to deliver 16 to 24 volts of electricity. The setup is easy, because the smartphone app has you add the camera to your Wi-Fi network first, and then walks you through the installation step by step.

You'll screw a bracket onto your house, with or without the optional wedge piece that helps angle the camera inward, toward the center of your front door. Then, the camera snaps onto the bracket, and you can give two already-installed security screws on the top a quarter turn to lock it in place.

The Doorbell Cam Pro has the most advanced-looking design of the four doorbells we reviewed, with a huge, round button that's ringed with LEDs and has a lighted logo in the center. These lights act as a motion-triggered floodlight — you can even adjust their brightness — which helps the camera capture color video at night.

That said, the square-shaped Doorbell Cam Pro (2.9 x 2.9 x 0.9 inches) also looks the least like a "normal" doorbell, and a couple of delivery guys actually skipped the whole thing and just pounded on my door instead.

Another shortcoming of August's camera is that its 120-degree field of view didn't show as much of my porch as the Ring cameras, which boast 160-degree viewing angles — the widest of the doorbell cameras we reviewed. Because they're shown in portrait orientation, August's videos actually come out looking a little square. This makes them fit your smartphone screen, so you don't need to rotate your device.

Unlike Ring's doorbell cam, which records at a sharp 1080p resolution, the August Doorbell Cam has a resolution of 1280 x 920. However, the video quality is good enough, and certainly better than that of Olive & Dove's720p RemoBell camera. Again, though, August's videos are actually in portrait orientation rather than landscape. The rest of the cameras in our test present videos in landscape mode, which seems more natural.

Plus, the motion-activated LEDs provide a better picture in low light and could help a creep realize they're being watched. The Ring doorbells and the RemoBell use infrared for their night vision, but that results in a grainier, monochrome image. We like how August just shines a light on whatever's happening instead.

Another clever feature with the August camera is HindSight; the camera is continually recording video, so when it detects motion, it will save a couple of seconds of video prior to a person entering the frame, so that motion alerts are more likely to show people actually in the frame instead of walking away from it. The camera isn't great at telling cars from people, but it does provide a slider for motion sensitivity in the settings, and when I adjusted that to 25 percent, the motion alerts dropped down to a reasonable level. However, I did miss the Ring's ability to isolate motion alerts to specific parts of the field of view.

Even with its odd orientation, the HindSight feature gives the August Doorbell Cam Pro the edge over other cameras, because it's more likely to actually capture what you're trying to see.

Audio quality was about the same as the other cameras tested here, and will depend a lot on environmental factors. I live a block from the freeway, for example, so the microphones have to isolate speech from a lot of ambient highway noise. I was able to talk to the person at the door, as long as we both spoke up a little. But in the videos, voices of passersby talking to each other were typically too muffled to make out.

August's well-designed app launches quickly, supports multiple devices and users, and looks great. One nice touch is the ability to turn off the indoor chime when you don't want the doorbell to make any sound at all. (This can't be scheduled, however.) Motion alerts can be turned on or off, and adjusted with a sensitivity slider, but you can't specify certain zones in the camera's field of vision to watch for motion. If that's important to you, Ring is your best bet.

From August app's live view, you can tap a button for two-way audio, and even unlock the compatible $229 August Smart Lock Pro from the same screen. (August also sells a $79 Smart Keypad that lets you give visitors time-sensitive codes to unlock the Smart Lock Pro, if they can't reach you to unlock it for them remotely.) All of this works really well, and the Smart Lock Pro has other cool features, like the abilities to lock itself after a set time and to unlock itself when you get home — carrying your smartphone with you, of course. The August products work together seamlessly, and it's great to be able to control everything from one app.

August includes a 30-day trial of its Video Recording subscription. After that, it costs $4.99 a month or $49.99 a year, to save your videos for 30 days. That's the highest cost of any of the cameras we tested. By comparison,Ring charges $3 a month for 60 days' worth of video, and the RemoBell costs $4 for 30 days' worth of video.

For your $5, August stores 30 days of video in the cloud and lets you access all of the recordings triggered by button presses and motion detection and save them to your phone. Without a subscription, you can still get motion alerts and doorbell alerts and look in at the live video anytime, but the video isn't saved anywhere.

A well-designed app and good video quality make the August Doorbell Cam Pro a great choice for people who want to replace a wired doorbell. While it doesn't have the highest resolution, its Hindsight feature ensures that you'll see people approaching your door. And we can't help loving it a little more for how easily it integrates with the August Smart Lock Pro, as well as a host of other smart home systems.