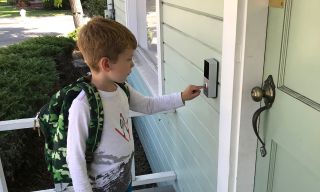 A video doorbell can let you see who's at the door and find out what they want — even if you're not home. After we tested several video doorbells, we think the best video doorbell is the Nest Hello Smart Wi-Fi Video Doorbell. It has the highest video quality, can recognize individual faces—and can announce them to you, too.

The best video doorbell under $100 is the Ring Video Doorbell. Although its resolution is just 720p—lower than the other video doorbells—but video was clear enough to see who was at the door, and Ring's app has a lot of excellent features. Be sure to enable two-factor identification, though.

Trying to decide which Ring video doorbell to get? We've put together a comparison of the Ring, Ring Video Doorbell 2, Ring Pro, and the Ring Door View Cam.

We've also got a comparison of the Nest Hello vs. the Ring Video Doorbell, in case you're having trouble deciding between two of our top picks. See all of the best video doorbells below.

Nest's doorbell cam produced the best-looking video we've yet seen from one of these devices, and its microphone and speaker were excellent, too. It can also recognize people's faces, and announce them when they come to your door. While it needs a hardwired connection, it continuously records video, so you'll never miss an event. You can also set up specific zones, so you'll only be notified when a person or object appears in that area of the frame. While you'll need to subscribe to the Nest Aware service (starting at $5/month) to get all of its features, they're worth it.

Read our full review of the Nest Hello.

Because it can run entirely on battery power, the Ring Video Doorbell 2 can go anywhere, and with an optional Ring Chime device ($27), you can hear the doorbell inside the house. This 1080p doorbell camera offers good customization for motion alerts, although it's not as robust as the Ring Pro's. However, you still get the same ability to share videos with neighbors, as well as Ring's affordable video-storage fees.

Read our full review of the Ring Video Doorbell 2.

View at Bed Bath & Beyond

Ring's original Video Doorbell has a max resolution of 720p, but otherwise, it's just as capable as Ring's more-expensive models. We like that you can use it either wired or on battery power alone, you can create custom motion zones, and also see what's going on in your neighborhood. Plus, Ring offers very affordable video storage plans.

Read our full review of the Ring Video Doorbell.

This video doorbell works with a ton of smart home devices

August's video doorbell has a clever HindSense feature that includes a couple of seconds of video before the motion is detected, which means the device is more likely to capture a usable image. While August's doorbell doesn't have the highest resolution among the cameras we tested, the footage was clear enough that we could see people's faces, and we liked that its spotlight helped illuminate whoever was coming to the door at night.

Because August's product looks the least like a traditional doorbell, visitors sometimes didn't know to press the device; they just knocked on our door instead. Still, it integrates tightly with August's excellent Smart Locks, which itself is compatible with Alexa, Siri and Google Assistant, among other smart home systems — the most of any of the doorbells we tested.

Read our full review of the August Doorbell Cam.

Can't install a traditional video doorbell? The Ring Peephole Cam replaces a traditional peephole, giving you an electronic means of seeing who's at the door. (Don't worry; it has a peephole built in). Because it screws into place, you don't have to drill any new holes into a door, so your landlord won't get annoyed.

Because the Peephole Cam is battery-operated, you'll have to recharge it once every month or so, depending on how often you use it. And while it works with Alexa—you can view a feed from the camera on an Echo Show, for example—it doesn't work with Google Assistant.

Read our full review of the Ring Peephole Cam.

Ring's smallest and best-looking doorbell has the most customizable motion zones of any doorbell we tested, letting you specify exactly which areas in the camera's field of vision should trigger an alert. It also has crisp, 1080p resolution and a wide, 160-degree field of view — tops among the cameras we tested — and the most-competitive storage costs.

Ring's app also lets you share videos with neighbors, so you can keep everyone informed if there's someone trying to break into multiple houses or steal packages. Installation is a little tricky, however; we had to install not just the doorbell, but also a separate device inside our existing doorbell's chime box.

Read our full review of the Ring Video Doorbell Pro.

An inexpensive video doorbell that delivers on the basics

The Eufy 2K Video doorbell records good-quality video over a 150-degree field of view. While you can sign up for cloud storage (which starts at $30/year for 30 days of storage), the Eufy 2K also has a microSD card slot, so you can save footage locally, too. However, it has a few drawbacks: It's a wired-only device, only supports one user (so you can't share it with family members), and has limited smart-home interoperability. But for around $150, it's not a bad deal.

When you push the button on a traditional doorbell, the action closes a circuit to ring a chime inside your home. Video doorbells are a bit more complex. When you push the button on one of these devices, the doorbell's camera sends a video feed to your smartphone over Bluetooth or Wi-Fi, and you can press a button in the app to talk to the person at the door over a two-way speaker. Each doorbell supports ring alerts, which notify your phone when a person rings the bell, as well as motion alerts, which can be a little more hit or miss.

How we test and rate video doorbells

We self-installed the video doorbells on houses in Massachusetts, California, and New Jersey, and tested in real-world conditions with friends and family ringing the bells day and night. We evaluated ease of setup, the design and features of the app, how well the app and doorbell kept us notified, and video and audio quality. We also factored in how much you'll pay for cloud storage to save the video.

What to look for when buying a video doorbell

Video doorbells typically require 16 volts or more to work. If you have a newer house, this may not be an issue. But as we found out, older homes with more-antiquated systems may not deliver enough juice. One of our test houses, which was built in 1946, was sending only about 10 volts of electricity to the existing doorbell, which wasn't enough to power the two doorbells in the roundup that lack built-in batteries.

After we upgraded the doorbell's circuit to a 20-volt transformer, everything worked as advertised. Most people shouldn't have to upgrade their transformers, especially with newer houses, and the two doorbells that have built-in batteries don't require power from the doorbell at all.

Some doorbells, like the Ring Video Doorbell 2, can run on battery power. This is incredibly helpful if your existing wiring isn't getting the job done and you don't want to upgrade the transformer. Just remember that you'll have to recharge these units regularly.

Your choice of doorbells will also depend on whether you're replacing an existing doorbell or installing a doorbell where there isn't one already. The Ring Video Doorbell 2 is the most flexible. While it can replace a hardwired doorbell supplying 8-24 volts of electricity, its rechargeable battery means you could put this doorbell anywhere. And the optional Ring Chime add-on can even sound an audible chime inside the house, just like a traditional doorbell would.

RemoBell also runs on batteries and can be installed anywhere. But it doesn't connect to existing doorbell wiring, which means the doorbell won't chime inside the house, only on your smartphone. The August Doorbell Cam requires 16-24 volts of electricity and can replace only a wired mechanical doorbell.

Do you want a narrow view of just the person at the door, or do you want to see everything around your entryway? The Ring Video Doorbell 2 and Ring Pro boast 160-degree viewing angles, which let me see my whole porch and driveway. The RemoBell and August Doorbell cams have tighter angles, of 120 degrees.

The higher the resolution, the sharper the image, which will make it easier to identify people at your door. Both of Ring's doorbells record video in 1080p, while the RemoBell and August Doorbell Cam record in 720p HD. August's resolution is actually 1280 x 960, but that's not quite "full" 1080p resolution.

The video doorbells we tested take different approaches to capturing video at night. The August Doorbell cam uses motion-activated LEDs to light the area in front of the camera, so it can capture colors a little better. The RemoBell and Ring's doorbells use infrared night vision to see in the dark, but the result is monochrome video.

Aesthetics may be a concern. After all, you're bolting this thing to the front of your house! The Ring Pro looks the most like a traditional doorbell, and Ring even includes four faceplates, so you can choose which matches your house's trim or paint one exactly the shade you like.

A dedicated home security camera may be a better choice if you're looking for actual security, because you can position such a camera in more places. And when you get a motion alert, you can back up the video and see what happened before the alert came in.