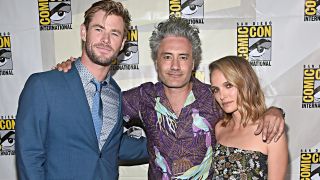 As expected, Thor — the norse god of thunder himself — is returning to the big screen for a fourth solo film. Except this time, that mantle won't be carried by Chris Hemsworth, but instead by a familiar face from the franchise.

The upcoming film is a part of Marvel's Phase 4 and follows the events of Thor: Ragnarok, which isn't just the best movie that the character has had to date, but is one of the top MCU films overall. So, here's everything we know about Thor: Love and Thunder.

Thor 4 (Love and Thunder) release date: when is it coming out?

Okay, fans, this is the hardest pill to swallow right now. We have to wait more than 2 years for Thor: Love and Thunder, which hits cinemas on November 5, 2021.

Who's in the cast of Thor 4: Love and Thunder?

As per usual, Chris Hemsworth, the original Thor himself, is returning to lead the cast. Similarly Natalie Portman and Tessa Thompson, will return to play Jane Foster and Valkyrie, respectively.

And while director Taika Waititi is back, we need confirmation as to whether Love and Thunder will feature his scene-stealing character Korg.

Oh, and we also need Jeff Goldblum to come back as The Grandmaster. He's already started to tease the possibility, too.

Yes, rumors of Natalie Portman's departure from the Marvel films have been exaggerated. MCU head honcho Kevin Feige revealed that the chance to work with beloved director Taika Waititi was crucial to getting Natalie Portman to come back for this movie.

What's this about a new Thor?

Yes, as revealed at San Diego Comic-Con 2019, Jane Foster become the new Thor, at least for this film. In the comics, this has happened twice, in both 1978 and 2014, when she was deemed worthy of carrying Mjolnir after Thor was no longer able to carry the mighty hammer.

Consider me thunderously excited. The Jane Foster Thor storyline I did with @rdauterman, (Eisner winner!) @COLORnMATT & so many more talented artists is one of my proudest moments in comics. I can't wait to see @TaikaWaititi & Natalie Portman bring the Goddess of Thunder to life. pic.twitter.com/3pylwsfR9eJuly 21, 2019

What's the plot of Thor 4: Love and Thunder?

Well, aside from Jane as Thor? We also know that Valykrie, who inherited the title of the king of Asgard in Avengers: Endgame, is looking for a queen. Yes, you read that right, Tessa Thompson's Valkyrie will now be canonically queer, matching her character in the comics.

As for whom that queen will be? No insights to share here, though there's extreme amounts of hope from fans online that Carol Danvers aka Captain Marvel, will get that title.