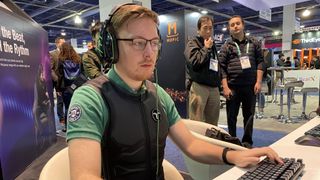 Audio enthusiasts often fall into the cliché of saying that you can really “feel” the sound when you’re listening to something through a good set of speakers or headphones — me included. But in the case of bHaptics’ Tactot ($499), you actually can feel the sound.

This vest contains forty haptic motors (20 front and 20 back), which are then contained in a one-size-fits-all vest that makes you look a bit like a futuristic cop. These can then be programmed to vibrate at specific triggers.

Korean company bHaptics has been making VR wearables for business use since 2015, mainly for software developers or VR experience companies. However it’s come to CES 2020 to show off its first product for the consumer market, and provided you have the dough, you can now add its ingenious haptic vest to your gaming peripheral collection.

The Tactot connects with your gaming laptop or gaming desktop via Bluetooth Low Energy (BLE), which means it’s super low-latency and power efficient. bHaptic claims the TactSuit has a battery life of over 10 hours, and when the battery (the box on the rear of the vest) is drained, it’s just a USB-C connection away from recharging.

For my first demo of the Tactot, I played VR action game Sairento, since this is one of a handful of games that bHaptic has partnered with for a custom profile available in-game. I didn’t really notice it as I played. Not because the vibrations were weak or the vest had malfunctioned, but because it made so much sense to me it felt near natural. Jumping around made the bottom actuators vibrate, bullets fired by enemies caused the whole suit to spasm, and my own gunshots were underscored by their own rhythmic shaking.

The newest Tactot feature is reading surround sound signals and converting them into vibrations. It's cool but still a work in progress. Once you’ve set it up, you can use the Tactot with any game (in the case of my second demo, Counter Strike: Global Offensive), music track or movie for a DIY 4D theatre experience, where the TactSuit does its best to translate sounds into haptics. It was a lot less refined than what I’d experienced with Sairento. The whole array of actuators in the vest vibrated in unison rather than specific ones at specific times, but it was still an immersive experience that shows there’s plenty of potential in this technology.

If you aren’t happy with how the Tactot works with your particular piece of content, you can always tweak it yourself. The developer options, accessible via a fairly easy-to-follow user interface, allows tuning for specific games. bHaptics will also offer online sharing for users to collaborate or use other people’s custom profiles. That’s probably a bit in-depth for many users, but just like modding a PC game to give it new features, this could be a goldmine for certain users to get the most out of the Tactot experience.

You can buy your own Tactot from Amazon. $499 is a steep price even for VR peripherals, but bHaptic hopes that the cost will drop in future. The company also sells an entire TactSuit, which includes haptic accessories for your arms, hands, feet and head.

I wouldn’t recommend this vest to a fledgling VR gamer, but if you’re a big fan of VR already, and relish the idea of doing some light coding to make your experience even better, the Tactot will be the new accessory on your wishlist.

Check out our CES 2020 hub now to see all the latest news, hands-on impressions and videos from the world's biggest tech show.