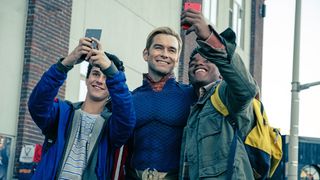 Amazon Prime Video’s The Boys took the streaming world by storm in the summer of 2019, quickly becoming one of Amazon’s most watched shows ever thanks to its captivatingly gritty twist on the saturated superhero genre. By most accounts, it's one of the best Amazon Prime Video shows yet.

The TV adaptation of Garth Ennis’ comic book series was greenlit for a Season 2 before the first season was even released in July, and the new episodes are already in production. So naturally, we’re wondering what’s next for Billy Butcher, Hughie Campbell and crew as they continue to take the fight to Homelander and the not-so-super heroes in The Seven.

Here’s everything we know about The Boys Season 2, including its release date, cast and the latest set photos and images.

The Boys Season 2 release date: when is it coming out?

The Boys Season 2 doesn’t yet have a release date, but filming is already well underway as revealed by showrunner Eric Kripke on Twitter. Co-executive producer Seth Rogen told attendees at San Diego Comic Con 2019 that “we’re literally halfway through filming the second season,” according to IGN.

In August, Kripke told Collider that he’d like The Boys Season 2 to launch about a year after the release of the first season, which would peg it for a July 2020 debut. However, given that filming seems to be moving along quickly, we wouldn’t be surprised to see the new season even earlier next year.

The official The Boys Season 2 trailer simply pegs the season as coming in "2020."

The first teaser trailer for The Boys Season 2 was posted in December 2019, and it's a whole lot. Things kick off with an extremely bloody Homelander floating down to Earth, right before a really sweet shot of The Female rocking some brass knuckles (perhaps the two are connected). We then get a breathless montage of just about every major character, including a recovering A-Train, a still-tormented The Deep and what appears to be Homelander's child. It's hard to pick up on what the major plot points are just yet, but the new season is looking just as bloody -- if not more -- as season one.

Based on where The Boys last left off as well as the set photos we’ve seen, it looks like most of the core cast will return for season 2. We’ve already seen Hughie Campbell (Jack Quaid), Frenchie (Tomer Capon), Mother’s Milk (Laz Alonso) and The Female (Karen Fukuhara) in set photos, and they’ll be joined once again by their leader, the anti-heroic Billy Butcher (Karl Urban).

In October 2019, Kripke revealed that beloved geek actor Patton Oswalt will be joining the cast in The Boys Season 2, posting a selfie with the actor alongside an ominous #SecretRole hashtag.

The Boys Season 2 set photos: what we’ve seen so far

The first set photo released by Kripke shows Hughie, Mother’s Milk, Frenchie and The Female after what we presume to be a very bloody battle. Karl Urban also posted on Instagram a similarly bloody picture of him reprising the role of Butcher. While we don’t know the context of the scenes, it’s a safe bet to assume that The Boys will continue to be extremely gory and violent.

A small token for #TheBoysTV fans. World's first pic of #Season2. As you can see, we're up to our old tricks. If you haven't seen, JOIN US. Streaming now on @PrimeVideo @TheBoysTV #TheBoys #SPN #SPNFamily #Timeless pic.twitter.com/3z29mVBfNlAugust 10, 2019

Totally Butcherd that one 😜! Up to our old tricks Shooting season 2 of @theboystv Karl Urban

Kripke recently tweeted out an illustration of the members of The Seven with the hashtag #Season2, which gives us the sense that all of the “heroes” will return for the next outing.

According to ComicBook.com, set photos discovered in October 2019 allegedly revealed a new female superhero joining The Seven, though they've since been taken down. That same batch of photos also may have revealed a statue that pays tribute to the late Soldier Boy, a former member of the supergroup.

The Boys Season 2 plot: what to expect

The Boys Season 1 ended on one heck of a cliffhanger, as Homelander revealed to Billy Butcher that Billy’s ex-wife Becca is not only alive, but has been living happily with her and Homelander’s child. This can only make Billy’s hatred for Homelander even deeper, and the former’s quest to kill the latter will likely be a key plot point in the second season.

We expect Season 2 to continue to explore the budding romance between Hughie and Starlight, the latter of whom will likely have to make a big decision about her allegiance with The Seven. Speaking of allegiance, we’d like to learn more about Queen Maeve, who seems to be questioning whether being part of Vought’s super-group is the right thing to do anymore.

In an exclusive interview with Comingsoon.net, Kripke spilled a few small tidbits of what to expect in Season 2. The showrunner noted that the next season may touch on the characters of the President and the Vice President from the comics, stating “ I would say we are going to get to it, we just haven’t gotten to it yet.”

Kripke noted that while one particular scene in Season 2 will poke some fun at mainstream superhero media, he wants to take his characters seriously and flesh them out on the same level as any cinematic Marvel or DC character.

“We do have one scene of superheroes that we’re clearly kind of poking fun at some existing heroes out there in the world, but only for like one scene,” said Kripke. “We have to be our own world with our own rules and our own integrity.”