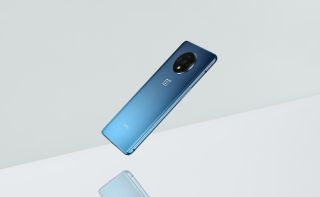 The OnePlus 7T series, the upgrade to the OnePlus 7 and OnePlus 7 Pro, is being unveiled in less than a month, but the Chinese manufacturer has decided to share some renders of its new phone with its fans, and subsequently the rest of the world.

OnePlus’ CEO Pete Lau posted the images of the standard 7T on the OnePlus forums, along with some concept sketches. Frequent leaker of OnePlus secrets Ishan Agarwal posted two tweets revealing the official renders of the OnePlus 7T, too.

In his post, Lau describes the company’s aims when designing the new phone, including ergonomics, materials and the new circular camera bump, which is a large departure for OnePlus’ phone design. The original OnePlus 7, as well as the 7 Pro, have their camera modules arranged vertically down the centre of the phone’s back; here, they’re horizontally arranged with the flash underneath.

Agarwal’s tweet also mentions the specs of the three camera sensors within the camera bump - a 48MP main wide sensor (with an equivalent 26mm focal length and an F/1.6 aperture), a 16MP 117 degrees FOV ultra wide (17mm) and a 12MP 2x optical zoom telephoto sensor (51mm, F/2.2). This builds on his previous tweets where he revealed the megapixels but not the focal distance or aperture size.

Other things we might have to look forward to when the OnePlus 7T series launches on Sept. 26 in North America and India, followed by a European launch on Oct. 10 are a 90Hz display on the 7T, improved battery and charging technology, as well as a brand new Snapdragon 855+ processor. The 7T Pro appears to be getting fewer upgrades, but will share the new CPU, extra battery capacity and enhanced fast charging.

To stay up to date with all of the news and rumors about the new OnePlus smartphone series, then our OnePlus 7T rumor hub will fill you in on all the confirmed and rumored info.