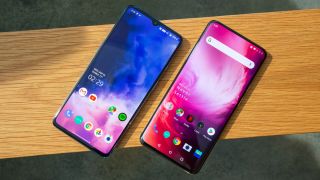 Earlier this year, OnePlus treated U.S. phone buyers to a new flagship, the OnePlus 7 Pro, while offering the lower-priced, lesser-featured OnePlus 7 in other countries. Now, the Android phone maker has taken the wraps off a OnePlus 7 successor — the OnePlus 7T — while a new Pro version of its flagship handset remains the stuff of rumors.

Look, OnePlus only promises to deliver premium phone features at a lower price than most flagships. It never said anything about making things less confusing.

So here in the U.S., we're left to compare the new OnePlus 7T with the slightly less new OnePlus 7 Pro. OnePlus' latest phone adopts many of the features found in its Pro-level predecessor, though at a notably lower price. Here's how the OnePlus 7T measures up to the OnePlus 7 Pro in case you're weighing which flagship killer to make your own.

The OnePlus 7T's processor is better than the OnePlus 7 Pro's, and it offers comparable cameras and a 90Hz refresh rate. But its price is lower than what the OnePlus 7 Pro debuted at. And that's the kind of downgrade users like to see.

As with OnePlus 7 Pro, the 7T will be offered through T-Mobile. You can also buy an unlocked version through OnePlus that will work on any GSM-based wireless network and will also work on Verizon's LTE network if you make arrangements with that carrier. The 7 Pro came in different configurations, while there's only one model of the OnePlus 7T.

On size alone, there's not much separating the OnePlus 7T and OnePlus 7 Pro. The new phone has a 6.55-inch OLED panel, only factionally smaller than the 6.67-inch display on the OnePlus 7 Pro. The Pro expands on that screen real estate with a pop-up selfie cam; the 7T houses its front camera in a teardrop-size notch, and while it's minimally invasive, it takes up space that the OnePlus 7 Pro doesn't have to yield.

The big feature with the OnePlus 7T's screen, though, is its 90Hz refresh rate. That matches a feature introduced with the OnePlus 7 Pro, and that's a good thing, too — the faster refresh rate makes for a smoother experience when you scroll through web pages or play a game. Switch between 60Hz and 90Hz on either phone and you'll see a world of difference.

Flip around the two OnePlus phones, and you'll see a big difference — and not one that favors the 7T. The OnePlus 7 Pro features a conventional camera array — three lenses running down the middle of the phone's backside. On the OnePlus 7T, those same lenses are now arranged in a circular stack, and it's kind of hard to overlook. The circular array also takes up a lot of space on the back of the phone, raising concerns about its durability. (That's a lot of glass that could break in the event of a drop.)

Speaking of cameras, we nearly buried a big change with the OnePlus 7T. While the OnePlus 7 released in other countries made do with a single 48-megapixel lens, the 7T takes a page out of the OnePlus 7 Pro's book. There are three lenses on the back of OnePlus' less expensive phone — a 48-MP main shooter joined by a 16-MP ultrawide lens with a 117-degree field of view and a 12-MP telephoto lens capable of a 2x optical zoom.

If you're well-versed in specs, you'll notice that's the same camera setup on the OnePlus 7 Pro, though that Pro phone is capable of a 3x optical zoom. At any rate, you'd expect similar performance from the two phones' cameras, though OnePlus says it's tweaked the software that powers its phones' cameras, including improvements to the Nightscape mode of low-light shooting.

The OnePlus 7T may have a lower price then the OnePlus 7 Pro, but it actually debuts with a better processor. The Pro model released earlier this year uses a Snapdragon 855 mobile processing platform, which was the best chipset you could get in an Android phone at the time. Qualcomm has since released a souped-up version, the Snapdragon 855+, which boosts the clock speed of its prime core while promising 15% faster graphics than the Snapdragon 855.

We ran the Geekbench 5 general performance test on both phones, and while the OnePlus 7 Pro has the better multicore score at 2,802, it's not that far ahead of the OnePlus 7T's 2,759 result. And the Pro we tested has more RAM — 12GB to 8GB — than the OnePlus 7T. Bottom line, you can expect the performance of OnePlus' cheaper phone to not be that far off from what its Pro model delivers.

Both OnePlus phones feature the company's OxygenOS, which is built on top of Google's Android. Regarding the OnePlus 7T, though, you're getting the most recent version of Android — Android 10. That makes the 7T the first phone to come out with Android 10 preinstalled — at least, assuming the new phone ships before Google's Pixel 4 debuts Oct. 15.

The presence of Android 10 on the OnePlus 7T introduces features like a more intuitive gesture navigation system. In fact, OnePlus improves upon those controls by letting you make the back motion within the top fifth of the display to open in-app menus rather than jumping backward.

The Android 10 update is headed to the OnePlus 7 Pro. In fact, OnePlus' older phone has been a part of the Android 10 beta program, so adventurous users could install the new version of Android on their phones.

The battery on the OnePlus 7T is bigger than what the OnePlus 7 offered. But at 3,800 mAh, it's still not as large as the 4,000 mAh power pack inside the OnePlus 7 Pro. As you might imagine, that means less battery life, not that the OnePlus 7 Pro aced our battery test to begin with. That phone lasted 9 hours and 31 minutes on our test, which involves continuous surfing over T-Mobile's Wi-Fi until the phone runs out of juice. That's below average for smartphones, and the OnePlus 7T fares even worse at 8 hours and 47 minutes.

At least you'll be able to charge the 7T faster. OnePlus says its new phone features an improved Warp Charge 30T charging standard, in which refined circuitry and an optimized charging algorithm should improve charge times. We got a drained OnePlus 7T up to 61% after 30 minutes of charging, which is on a par with what we saw from the OnePlus 7 Pro.

What should you buy?

The OnePlus 7T gives Android phone lovers a less expensive option that also happens to offer the best features of the OnePlus 7 Pro. In that sense, this latest phone is very much in keeping with the way OnePlus has approached the smartphone market.

You'll get more storage options and a bigger screen with the OnePlus 7 Pro, and its pop-up selfie cam is an impressive design feat. But if you want triple cameras, a quick-charging battery and a screen with a 90Hz refresh rate, you've now got a sub-$600 smartphone clamoring for your attention in the OnePlus 7T.