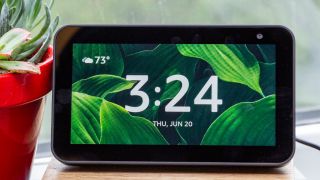 The Echo Show is Amazon's Alexa-powered smart display. We didn't think it'd go on sale during Prime Day, but Amazon is proving us wrong. The Echo Show 5 is getting its first ever price drop and it's a good one. Currently, you can get the Echo Show 5 for just $49.99, which is $40 off.

Amazon Echo Show 5: was $89.99 now $49.99 @ Amazon
This pared down Echo Show still features a display and all the power that Alexa brings. A great way to make your home smarter.View Deal

The Echo Show 5 is a compact version of the original Show, offering Alexa's voice-activated skills and control of your other smart-home products plus camera and video screen functions. It would suit being placed in the kitchen where you could use it as a photo frame that can bring up recipes, or on your nightstand as an alarm clock that you can also use to stream video.

The Show 5 even has a physical camera shutter for increased privacy, something that the more expensive Echo Show lacks.

The Prime Day discount is a weighty 40% off. It’s also the first time that the Echo Show 5 has gone on sale since it was launched earlier this year, so it’s a very good time to buy. You can get it in either charcoal or sandstone (black or white) too, so it’ll likely match whatever room you want to put it in.