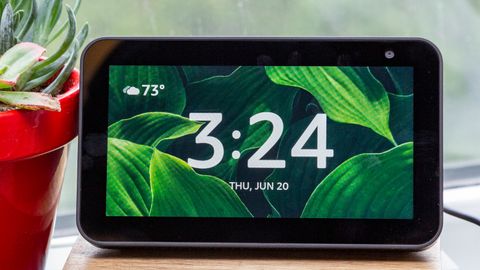 This budget smart display has a bit of an identity crisis.

Sept. 25 Update: Amazon just announced the new Echo Show 8, a mid-size smart display it wants to slide onto your countertop.

Amazon's 2nd-generation Echo Show was one of the best smart devices I reviewed last year. Sporting premium audio, internet browsers, a nifty futuristic design, support for live TV and a killer 1280 x 800 screen, it seems there's almost nothing it can't do. But there's one catch: It's $229.

Enter the Echo Show 5, a smaller and pared-down version of the Show that's only $89.99.

Overall, this is a respectable smart display with decent audio, a nice screen and some nifty features. But in shrinking the Echo Show and stripping out some features, Amazon may have gone too far. The Show 5 is a jack of many trades, but a master of none.

This is a cute device. The Echo Show 5's back is covered in the same sleek gray mesh fabric that covers the 2nd-generation Echo Show. But while that device has an angular, wedge-shaped design, this one is rounded — more like a friendly clock you'd put on your nightstand than a miniature television or tablet.

On top of the Show 5 are four buttons: two for volume, one that mutes the microphone, and a switch that puts a physical camera shutter over the camera. I rather like the shutter. Not only does it make a very pleasing click when you snap it back and forth, but it may give people who are creeped out about having a webcam in their house some peace of mind.

One cool trick: When your alarm goes off in the morning, you can tap the top of the Show 5 to snooze. However, the alarm itself is a fairly basic Alexa tone; you don’t get the same advanced alarm features and options that you do with Lenovo’s Smart Clock.

Display: You can do better

Amazon says that the Echo Show 5 is best suited for watching music videos, news clips and how-tos. In my experience, its 5.5-inch, 960 x 480 display provided a functional, but not exceptional, viewing experience.

The display is smaller than those of more expensive smart displays, such as the 7-inch Nest Hub's, but it is larger than the 4-inch display on the Lenovo Smart Clock. The Smart Clock's display is lower resolution (400 x 800), but also doesn't try to do much with its screen other than displaying the time.

While watching an episode of Amazon's Too Old To Die Young, which took place outdoors at night, I had trouble making out the characters' shadowed facial features. I could barely make out a police car driving down the dark road. The Wonder Woman trailer, which is mostly comprised of well-lit scenes, was easier to watch. Still, the brights, reds and blues of Wonder Woman's suit didn’t stand out as much as they should have. The glossy display also kicked back some glare in brighter settings.

Even if the colors and contrast were fantastic, however, the Show 5's screen is too small for me to recommend watching TV or videos.

Additionally, you're limited in what you can actually watch. It doesn't have web browsers or YouTube support like the Echo Show does. The only videos you can watch are a limited selection of TV episodes from NBC and Prime Video, or short news clips from outlets like Reuters and CNN.

You can also access How-To videos from WikiHow (say, "Alexa, show me how to fold a paper crane," for example). However, I'm not clear on the use case for these. If you want to quickly learn how to do something, wouldn't most people rather look it up and follow along at their own pace?

Overall, I can see the Show 5 being useful for video if you fancy watching This Is Us on your nightstand before bed. But it’s certainly a worse experience than that of watching the same show on a laptop, tablet, and even many smartphones -- and those can access Netflix and a host of other streaming services. If you’re looking for a bedtime video viewer, I don’t see the Show 5 being your best option.

Audio: Not terrible, not great

For such a small device, the Echo Show 5's single 4-watt speaker delivers acceptable audio. It's around the same quality as that of Amazon's 3rd-gen Echo Dot, except that the bass is difficult to make out.

While listening to New Kids On The Blocks' "Step By Step," I could barely hear the lowest tones, even at maximum volume. The bassline certainly didn't reverberate through the table, the way it does with bigger speakers like the Echo Show and Echo Plus. The Echo Dot, playing the same song, delivered slightly better sound overall, with a booming bassline.

The Show 5 performed a bit better in Backstreet Boys’ “Tell me Why.” While the bass didn’t boom, I could hear it more clearly than I could on the Echo Dot. However, both devices had trouble with the treble; the vocals overpowered the high piano line behind them in both renditions.

I do like that the Show 5, like the Show, displays lyrics alongside the songs it's playing. You can also pause and scroll back through them, should you need to resolve any disputes with your karaoke buddies.

Overall, voice control on the Show 5 felt a bit like throwing darts at a board until something stuck.That's because the Echo Show 5 lacks some of the features of the larger Echo Show, so you can't use the same commands with the smaller smart display. It took me a while to figure out which commands would get me what I wanted. This could be an issue, however rare, for homes with an Echo Show and an Echo Show 5.

Similarly, I had trouble getting Alexa to get me back to the home screen. I was stuck for a while on the NBC skills screen. "Alexa, stop" did nothing, and "Alexa, cancel" did nothing. "Alexa, go home" eventually worked.

If Alexa isn't cooperating, you can try navigating with the touch screen instead. That was also frustrating, however, because the screen had a significant lag. Whenever I tapped the "back" button to return to the previous screen, for example, I had to wait around 3 seconds for the Show 5 to execute the command. And I sometimes found myself having to press buttons multiple times before Alexa seemed to get the message. We did receive a Show 5 prior to its official launch, so this could be a case of it needing newer software; we will update this after we’ve had a chance to use it longer.

This frustration doesn't sound like the end of the world, and it's not, but using this device was significantly slower than using a computer or tablet. The lag time adds up.

Given that the Echo Show 5 only has a 1-megapixel camera, I was expecting video calls to be poor, but I was pleasantly surprised that I looked much better through the Show 5's camera than I did through that of my iPhone 8 Plus. The colors were accurate, and not at all washed out by my office's bright lights.

I also made a voice call to a friend's phone, and it went off without a hitch. The audio was a bit grainy, but I could understand everything that he was saying.

Shopping: There, but not as useful

One of the features I really like about the Show is that you can hold an item up to its camera, say "Alexa, scan," and Alexa will identify the product and let you add it to your Amazon cart. You can't do that on the Show 5, which is disappointing.

You can still shop on the Show 5: I asked Alexa to buy some toilet paper and it showed me a list of products I could buy, indicating which one was Amazon's choice. I could then select a device to add to my Amazon cart via the touch screen or Alexa. It was nice, but I'm not sure why you would rather do this on the tiny Show 5 screen than on a computer.

Cooking with the Show

Ask Alexa for recipes for whatever you'd like, and you'll see a list of recipes curated from sources like AllRecipes, Kitchen Stories and Sidechef. There's a good selection, but I wish there was a way to sort the recipes by criteria such as rating and cooking time.

Once you've selected a recipe, Alexa can read the steps to you, or you can scroll through them yourself. You can pause them, and ask Alexa to repeat them, which was very useful for me as an amateur cook.

Some (but not all) of the recipes come with short, cute videos that demonstrate the cooking process. These are fun, but not especially useful; if you pause them to complete a step yourself, Alexa returns you to the recipe screen, and you can't restart the video from the place you left off.

Like the Show, the Show 5 lets you use its screen to control your connected smart-home devices. It looks a lot like the Devices screen on the Alexa app, listing your bulbs, plugs and anything else you have connected to Alexa; you can dim your bulbs and turn your various plugs on and off. The Show 5 can also display security camera feeds, and it allows for two-way talk functionality with Ring video doorbell cameras.

After spending a bit of time with Echo Show 5, I asked Amazon who exactly this device was for, and how the company intends it to be primarily used. Amazon’s spokesperson responded that it was a flexible device that could be used in any room, for many different purposes.

This is where the Show 5, unfortunately, falls short. If you’re looking for music and movies in your living room, you’ll get similar audio from the cheaper Echo Dot, and a better video experience from your computer, tablet or TV. If you’re looking for a bedroom clock, the Lenovo Smart Clock has better audio for a lower price, and also comes with more alarm features. And while the Show 5 is functional for tasks like calls, shopping and cooking, I don’t know why you’d need an $89 device for those tasks when your phone or computer can do them just fine.

The Echo Show 5 is a competent device. But Amazon needs to figure out what it is.