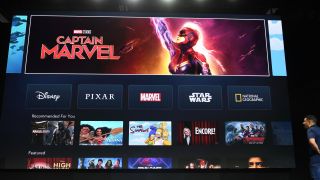 It's go-time for Disney Plus. With Star Wars and Marvel in its corner in addition to a ginormous amount of Disney shows, movies and originals, this is easily the most anticipated streaming service in years.

Yes, Disney Plus has launched, and reportedly a million or more users pre-ordered. Pricing starts at $6.99 per month, with a $69.99 per year option, which saves you $13.98 each year. If that's too expensive, we're tracking all of the Disney Plus deals, including Verizon's free year and the Hulu/ESPN+ bundle.

If you're looking for reasons to subscribe, the show that most folks are excited about is The Mandalorian, which exists in the Star Wars universe. The show, which debuts one week at a time, is helmed by Jon Favreau — who's spent a lot of time with Disney, from the Iron Man movies to recent live action adaptations including The Lion King.

Before you click pre-order, know that the Disney Plus supported devices list is very broad. For starters, it'll be on streaming boxes and sticks (Android TV, Apple TV, Roku, Chromecast and Amazon Fire TV) and the PS4 and Xbox One consoles.

Wondering where to start? Our The Mandalorian review posits that this show mixes western tropes and Star Wars lore to great effect.

After subscribing, you're gonna need to download a Disney Plus app, and we've gor links for iPhones, iPads, Android phones, Amazon Fire tablets. Streaming also works via web browsers, as Disney Plus plays on Chromebooks.

Disney's doing its best to make Disney Plus a mandatory part of participating in modern culture, as Marvel Studios exec Kevin Feige says the shows will be important to understanding the films — an issue with the Netflix Marvel shows and Agents of S.H.I.E.L.D..

Also, if you're worried about buyer's remorse, Disney's already anticipated that. The service starts with a free 7-day trial, so you can cancel if you need to.

Disney Plus is live and available either in the pretty-cheap $6.99 standalone package — which nets you the whole Disney vault and The Mandalorian — or with a $12.99 bundle that includes Hulu and ESPN Plus, which some might consider a cable-replacement.View Deal

Get ready with our guide to all of the Disney Plus shows and movies!