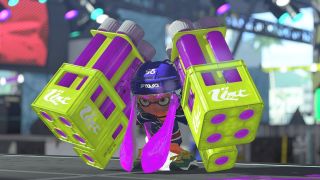 Splatoon 2 is pretty much just more Splatoon, and that's a great thing. Nintendo's charmingly messy multiplayer shooter is just as much of a delight now as it was when it debuted in 2015, and it's gotten even more compulsively playable just by being on the Switch. The fresh modes, maps and awesome new weapons don't hurt either.

Still, Splatoon 2 isn't without its flaws, and there are plenty of little quirks we'd love to see cleaned up over time. Here are the joys and cons of Nintendo's latest big Switch exclusive.

Splatoon provided a vibrant shot in the arm to the grim shooter genre when it hit the Wii U in 2015, and there's still nothing like it. The goal of the game is to cover the arena with your team's color by spraying ink, and the primal, childlike joy of making a colorful mess of the battlefield is one of the best feelings you can get from a modern multiplayer game. And while Splatoon 2 is the perfect shooter for folks typically intimidated by the genre, it also packs plenty of competitive depth and ranked battle modes for those looking to get serious.

Like its predecessor, Splatoon 2 features a surprisingly deep single-player Hero Mode that teaches you the ropes while also standing on its own as a fun shooter-platformer. It's charmingly inventive, packed with hidden collectibles and features some truly memorable boss fights -- including a showdown with a sentient toaster.

Joy - New weapons and moves are a blast

The biggest additions to Splatoon 2 are its new weapons and abilities, all of which are a blast to use. The Splat Dualies let you dual-wield pistols while performing acrobatic dodges, adding a new layer of movement to Splatoon's already frenetic combat. The new special abilities are incredibly satisfying, whether you're pounding the ground with Splashdown or launching a barrage of lock-on rockets with Tenta Missiles. On top of being plain fun, the new weapons and moves should give competitive Splatoon players plenty of new strategy to sink their teeth into.

One of Splatoon 2's greatest strengths is simply that it's a Nintendo Switch game. The original Wii U version required you to use the clunky tablet controller, and there was no option for off-TV play. Thanks to the modular nature of the Switch, you can play Splatoon 2 on your TV with a proper controller, prop it up on your table during breakfast or knock out a few single-player levels on the subway in handheld mode.

Splatoon 2 is an incredibly polished and gorgeous game, even by Nintendo's high standards. Watching each map become a big colorful mess is a sight to behold, and the game's glossy globs of ink and stunningly vibrant levels look fantastic whether you're playing in handheld mode or on a TV. There's also the infectious soundtrack, which remixes much of the catchy, quirky pop-punk from the first game.

MORE: How I Found the Best Nintendo Switch Headset

While Splatoon 2 retains everything that made the original great, it also suffers from some of the same flaws. The game's strangely archaic map rotation only lets you play two maps per mode at any given time -- which is great for getting to know each map really well, but bad for folks who have limited time and want to see all of the game's arenas.

At one point I played on the same map for four matches in a row, which wouldn't fly in just about any other modern shooter. Even more frustrating is that Salmon Run, the game's excellent new four-player co-op survival mode, is only available to play online during set times (if you have friends nearby, you can play the mode whenever you like via local wireless).

Getting to finally play Splatoon 2 on the go is a treat. However, the game's only offline mode is the campaign, and while there's plenty of fun to be had there, I would have loved an option to play practice multiplayer matches against the AI while commuting to work.

Similarly frustrating is Splatoon 2's lack of local multiplayer, which was an option in the first game. A friend and I recently fired up the game while out at lunch in hopes of enjoying some co-op splatting, only to come to the sad realization that there's no way for two players to play on the same Switch. It's an especially strange omission considering that recent Switch releases such as Mario Kart 8 Deluxe and Arms let you enjoy split-screen play both online and off.

I'll say this again: Splatoon 2 is more Splatoon. That's a great thing if you're a fan of Nintendo's joyfully messy multiplayer shooter, but if the first Splatoon didn't do it for you, the sequel won't change your mind.

Splatoon 2 can often feel like Splatoon 1.5, largely because many of the maps, modes and mechanics are pulled right from the first game. Still, by simply iterating on one of its best multiplayer games in years, Nintendo has created an incredibly addictive and charming shooter -- and the best reason to own a Switch since Breath of the Wild.