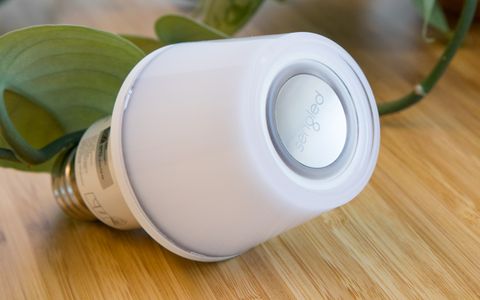 The Sengled Solo Color Plus combines a smart LED and speaker in one, but is pricey for what it offers.

Light bulbs are becoming much more than light bulbs, and nowhere is this trend more apparent than in the Sengled Solo Color Plus. This color-changing LED doubles as a Bluetooth speaker, and it can do a lot of nifty party tricks, too. But is it worth $49.99?

At around 550 lumens, the Solo Color Plus bulb isn't superbright. Philips Hue's White and Color Ambiance bulbs and Sengled's newer Element Color Plus bulbs are both rated for 800 lumens, and Lifx's A19 Wi-Fi Smart LED Bulb clocks in at 1,100 lumens.

The Solo Color Plus is 4.8 inches long, 2.6 inches in diameter and weighs around 13 ounces. This is a bit bigger than most A19 bulbs, which are traditionally around 2.35 inches in diameter and 4.35 inches long. Part of this is to accommodate the speaker (the sound comes from an opening in the top), but it looks a bit bulky when screwed into a lamp.

Unlike many of Sengled's smart bulbs, the Solo doesn't require a smart-home hub to connect to your phone. To use the Solo Color Plus, you simply screw it into your light fixture, turn it on and pair it with your phone via Bluetooth the same way you'd pair wireless headphones. Then, download the Sengled Pulse app for iOS and Android (not to be confused with Sengled's Element Home app, which controls the Element Color Plus bulbs), and it'll be automatically linked.

The process took about 2 minutes, which is probably the shortest amount of time it's ever taken me to set up a smart bulb.

The app is very easy to use and recognized my Solo as soon as I turned it on. The main navigation page is a color wheel with a power button in the center. Selecting any part of the wheel turns the bulb that color, and pressing the power button turns it on and off.

There are a few cute settings that you can change the bulb to at any point. Relax changes it to a sensual greenish yellow, Energy to a very bright white and Romantic to a light magenta, while Rainbow sends it on a gradual journey around the color wheel, with blue fading into purple, pink, orange, yellow and so on.

By far the coolest feature, however, is "Rhythm." When the light is set to Rhythm mode and is playing music, the colors will change and pulse to the beat of the music. It's pretty sensitive. I played songs of all speeds and volumes, and the only beat that it missed was a small piano twinge in Birdy's "Skinny Love."

By far the coolest feature is Rhythm mode. The colors will change and pulse to the beat of the music.

All in all, the app is very easy to use, but it doesn't offer nearly as many features as other smart-home apps. For example, you can't create a schedule like you can with Sengled's Element Home app (besides a very basic Sleep Timer function that sets the bulb to turn off after a certain number of minutes), or create your own scenes like you can with Nest's or Philips' ecosystems — and forget advanced features like geofencing that you'll find in more advanced smart-home devices.

I was pleasantly surprised by the sound this bulb put out. For its size, it was crisp and clean, with reasonable bass — I could practically feel the booms underneath Macklemore/Ryan Lewis' "Can't Hold Us" and Imagine Dragons' "Radioactive. " That said, at its full volume, the sound is not nearly as big as you'll get from the Amazon Echo or Sonos One, and it isn't even quite on par with the Echo Spot, though they're close.

I was pleasantly surprised by the sound this bulb put out. For its size, it was crisp and clean, with reasonable bass.

If there's one reason I can't recommend the Solo Color Plus, it's its lack of smart-home compatibility. You can control it with your phone, but not with any smart-home ecosystems. It doesn't work with Amazon's Alexa, Google Assistant or Apple's HomeKit, not to mention Wink, Nest or Samsung SmartThings.

There's one way you can control the Solo with your voice: You could set up an Echo device to stream through the Solo the same way it could any other Bluetooth speaker. This would allow Alexa to control the music coming out of your bulb, but it wouldn't be able to turn the light on and off, or change its color. However, given that this speaker's sound quality is worse than most Echo devices', you probably wouldn't want to do this.

If there's one reason I can't recommend the Solo Color Plus, it's its lack of smart-home compatibility.

At the end of the day, it's convenient to be able to control this product with your phone. But you can't integrate it into your smart home, which should make it a tough sell for anyone who wants to connect multiple smart lights.

Sengled's Solo Color Plus is easy to set up and control, and comes with respectable audio and some fun lighting settings. It would be fun to show off at a party. At the same time, it doesn't work with other smart home systems, so you can't control it with your voice, add it to routines or sync it up with other light bulbs.

For personal use, the Solo Color Plus could make sense, but you'll get much more value out of Sengled's Element Color Plus starter kit—which gets you two bulbs that work with Alexa and Google Assistant — and a smart speaker.