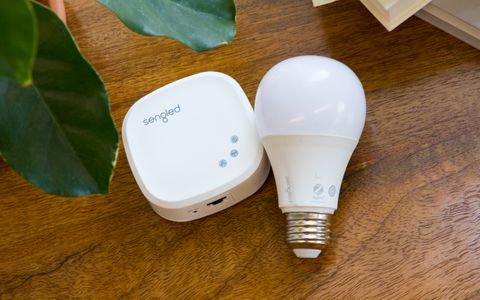 If you're looking for inexpensive color smart bulbs, look no further than the Sengled Element Color Plus Starter Kit.

As connected devices go, smart bulbs are a great first step. They're simple to install and inexpensive, and they can help you get used to voice commands and remote controls. At $79.99, Sengled's Element Color Plus Smart LED Starter Kit is a bargain compared to competing starter kits (Philips Hue's White and Color Ambiance Starter Kit is $199), making them the best smart lights for those on a budget.

The Element Color Plus Starter Kit comes with two bulbs, a Sengled smart home hub that connects the bulbs to Wi-Fi, the hub's power cord and an Ethernet cable.

Two bulbs is relatively common for smart-bulb starter kits, though the the $174 Philips Hue White and Color Ambiance kit comes with four.

Some smart bulbs, such as the TP-Link's Casa smart bulbs and Lifxs Color A19, come with Wi-Fi built in, meaning you can set them up, turn them on, and connect them to your Alexa or Google Home account without any extra hardware. Like the Philips Hue bulbs, Sengled's bulbs have to first connect to a small hub, which connects to your router via an Ethernet cable (you can also use a third-party hub, such as the Amazon Echo Plus). In this way, you can control your lights remotely from your smartphone.

Personally, I'm not a huge fan of the hub, because it puts a damper on my vision of a fully wirelessly connected smart home. The upside, however, is that the hub makes setting up Sengled's bulbs a breeze.

I didn't have to wait for the app to find and pair with the bulbs, something you often have to do with hub-less devices. Instead, the bulbs came pre-connected to the hub, so after I plugged the hub into my router, the bulbs were already set up in the app, and I was good to go.

MORE: Every Smart Light That Works with Alexa (And How to Get Them)

Sengled's smart bulbs are rated for 800 lumens. Philips' are rated for a brighter 840 lumens, but you probably won't notice a difference. Lifx's Color A19 delivers 1,100 lumens but consumes more power (11 watts to Sengled's 8.6), in part because it's Wi-Fi-enabled and doesn't require a separate hub. Many of the colors aren't nearly that bright, but they're still visible enough to cast the shade throughout the room.

Sengled's Elements Home app isn't as comprehensive as some others (such as Philips'), but it gets the basics right. It's also stable; it never crashed or became unresponsive while I was using it.

With the app, you can adjust the brightness and color temperature (from a tan Edison to a bright white Daylight), select the light color, and schedule the bulbs to turn on and off at a certain time. In the Performance tab, you can also view power consumption, for both individual bulbs and your home as a whole.

While reasonably comprehensive, Element Home does lack the vacation mode and built-in geofencing features that the Philips Hue app sports, as well as routine features (tying multiple lights' settings to one command) present in a number of apps such as TP-Link's Kasa. Smart-home power users may require such features, but their absence shouldn't be a deal breaker for a first-timer.

As one of the best Google Home compatible devices and best Alexa compatible devices, you can use Alexa or Google Assistant to control your Sengled bulbs with your voice. The kit also works with the smart-home hubs Samsung SmartThings, Wink and Echo Plus. That's a decent selection, but it leaves out a few major players, notably Apple's HomeKit, which is supported by Philips Hue lights. Nest, which Philips Hue supports, is another notable absence.

Pairing the device with my Google Home was a breeze; all I had to do was sign in to my Element Home account in the Google Home app. Connecting the device to Alexa was a bit trickier. In addition to pairing the bulbs, I had to install the Sengled Alexa skill, but Amazon's assistant found the bulbs easily after that.

Sengled doesn't sell quite as many smart bulbs as you'll find in the Philips Hue lineup, but it still has some decent offerings. In addition to the Element Color Plus, there's the Element Classic Starter Kit ($39), which is less expensive but includes only white lights. For flashier fare, the single Solo Color Plus ($49) doubles as a Bluetooth speaker. Sengled's Smartsense ($9 for the A19) and Snap ($129) bulbs include motion sensors and security cameras, respectively, and the company offers a few other products that feature individual colors, gradual dimmers, surround sound and even Wi-Fi.

If you can't get enough of the Element Color Plus, you might want to get additional single bulbs, which sell for $29.99. That's a good deal cheaper than a single Philips Hue White and Color Ambiance A19, which is $49.94 on Amazon, and Lifx's Color A19, which is a whopping $53.99.

However, Sengled isn't as versatile among smart-home systems — HomeKit fans, in particular, should stay away — and it lacks some of the Hue's more advanced options. Still, for what most smart-home owners will be looking for (quick setup, an intuitive app interface and highly customizable color), the Sengled Element Color Plus gets the job done just fine.