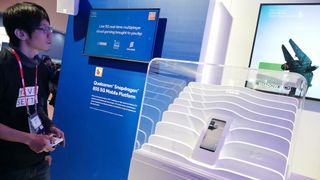 BARCELONA — At the Qualcomm booth at MWC 2019 there’s a bunch of 5G-related goodies but the standout has to be OnePlus, who was on hand to show off its 5G credentials, with a prototype handset.

OnePlus' first 5G phone is expected to have a June release date in Europe, but according to USA Today, the phone is not coming to the U.S.

And it really is prototype. The phone was behind glass and wrapped in plastic. So this wasn’t an official reveal like some we have seen at the show. But that doesn't mean that there wasn't enough on display to speculate.

MORE: Most Anticipated Phones of 2019

While it's difficult to gauge what kind of handset it will be, it's clear that the 5G OnePlus has a 21:9 screen and no notch; he game playing on the device looked incredible.

There was no sign of front-facing camera either, or none that we could see — this is one slim-looking phone that was all screen. It was also running Snapdragon 855 and the 5G came courtesy of the X50 modem.

It wasn't just sitting pretty at the booth, but there to highlight the massive potential 5G has to change your mobile experience.

To showcase this, OnePlus had a demo of some pretty seamless cloud gaming. The game on display was a flight simulator called Ace Combat 7, and I played it through OnePlus' mystery device, using a gamepad, which was live-streamed on a big screen.

The game was pretty graphically intense, but streamed through the phone it seemed like a decent, near seamless experience.

Yes, 5G is all about bringing superfast download and upload speeds to your phone, but the game actually only needed around 25 Mbps to stream. The big difference, which is a major (One)plus point of 5G, is the low latency and that was really impressive.

Interestingly, the game was only a 20MB download on the phone — the majority of the processing grunt was being done in the cloud. The Xbox controller I used matched what was on the screen beat for beat, meaning that 5G is actually staying true to its promise.

If this is the OnePlus 7 (given it was literally shrouded in secrecy, then it may well be) then it is shaping up to be a truly great phone.