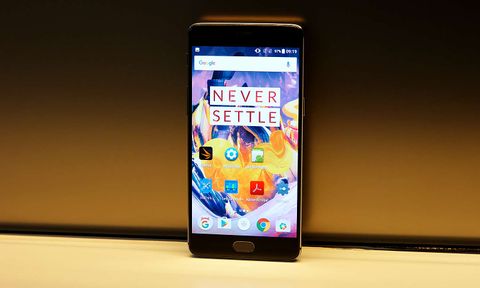 The OnePlus 3T has an even faster CPU, 2 extra hours of battery life and a new 16-megapixel front cam, making this device the best phone for the money.

The $399 OnePlus 3 immediately became my favorite midrange phone when it arrived earlier this year. Unfortunately, OnePlus has discontinued this model. Not to worry, though — the 3's exit has made way for the OnePlus 3T, which builds on everything that was great about the 3 by adding an extra 2 hours of battery life, a faster processor and a new 16-megapixel selfie cam, all for $439. (A second model doubles storage from 64GB to 128GB, selling for $479.)

Even with its higher price, the OnePlus 3T gives you even more than the stellar OnePlus 3 had to offer. This new model is one of the best phones you can get for the money.

The one thing that's almost entirely unchanged on the 3T is its design. Aside from a slightly darker gunmetal-gray aluminum body, the 3T is indistinguishable from the OnePlus 3. But that's not really a bad thing, because with symmetrical antenna lines and a centered rear camera, the 3T remains as handsome as ever.

In front, you still get a fingerprint reader that doubles as a capacitive-touch home button as well as two additional (hidden) touch buttons on either side for back and for recent apps. And after returning to this familiar design after using other Android phones, I appreciate OnePlus' notifications control slider even more, as it makes switching among Do Not Disturb, Silent and Ringer modes exceedingly quick and simple.

Like any good phone in 2016, the 3T features a USB-C port for charging and data transfer, and there's still a 3.5mm jack for plugging in your headphones.

As displays continue to get brighter and denser, the OnePlus 3T's 5.5-inch, full-HD screen doesn't stand out as much as it used to, but it still looks pretty good. Because the 3T's screen is an AMOLED panel, it shows off a wide range of rich, saturated colors. This makes watching things such as the trailer for Valerian and the City of a Thousand Planets especially enjoyable, given all the bright neon lights and glowing cyberpunk settings in that video.

We found that the OnePlus 3T's screen registered 385 nits of brightness, which is actually pretty close to the Pixel XL's 395 nits and slightly brighter than the 379 nits we recorded with the OnePlus 3. That score is still less than the smartphone average, though, which stands at 433 nits.

The OnePlus 3T's sRGB color range of 189 percent is on a par with showings by other AMOLED-equipped phones, including the Pixel XL (191 percent) and the Galaxy S7 (189 percent). With a Delta-E rating of 5.65 for color accuracy, the 3T was worse than the smartphone average of 4.01. (Numbers closer to zero are better.) Still, if you're willing to trade color range for accuracy, you can switch to one of the 3T's different display modes.

Performance: The fastest Snapdragon around

Most people don't know there are two versions of Qualcomm's Snapdragon 821 chip. On paper, the OnePlus 3T and Pixel XL have the same processor, but the CPU in the 3T features a higher clock speed of 2.35-GHz. As a result, OnePlus' phone outperforms the Pixel XL, even though Google's device costs $300 more. It also doesn't hurt that the 3T has a massive 6GB of RAM and either 64GB or 128GB of speedy UFS 2.0 storage.

This means both on benchmarks and in the real world, the 3T absolutely flies. Apps launch like lightning, while scrolling is super smooth, and overall performance is among the best you can find on an Android phone right now.

However, for games and graphics, the 3T's Snapdragon 821 chipset didn't perform significantly better than competing phones. The 3T posted a score of 30,112 in 3DMark's Ice Storm Unlimited test. Last year's OnePlus 3 hit 30,491, and the Pixel XL and LePro 3 were in the same ballpark, with scores of 31,347 and 28,182, respectively. The smartphone average for 3DMark Ice Storm Unlimited is significantly lower, at 16,646.

The 3T's 16-megapixel rear camera is pretty much the same as the OnePlus 3's camera, which is to say that it's a solid shooter in bright light, but a step behind camera phones from Apple, Samsung and Google in low-light environments.

In a shot of some New York street shrubbery, the 3T produced a pretty satisfactory picture with solid focus and relatively rich colors. The Pixel XL did a better job of capturing highlights from the morning sun, and the S7's photo was a tiny bit more detailed, but overall, differences were pretty minimal. And when you compare the 3T's shot to one by the similarly priced LeEco Le Pro3, the 3T wins by a mile due to the LeEco's trouble with focus.

Results were similar when I moved indoors and took shots of my lunch. The 3T's photo easily trumped the Le Pro3's shot, but didn't have the same level of detail I saw in the S7 or Pixel's photos. And while the OP3T's rear cam has the same f/2.0 aperture as the Pixel XL's, because the Pixel has a better HDR mode and a sensor with slightly larger individual pixels, it lags slightly behind Google's phone and in low-light scenarios like this one.

Up front, the 3T's gets a new, significantly higher-res, 16-MP selfie cam. (The OnePlus 3's front camera used an 8-MP sensor.) This Samsung 3P8SP sensor isn't the same as the SONY IMX 298 sensor on back, and OnePlus claims the selfie cam can even merge pixels together to capture more light in poorly lit environments.

The 3T's 16-MP front cam certainly impresses, providing detailed pictures, but they weren't necessarily better than what you'd get from other phones. The high resolution helps the most in bright light, because when the lights go down, the camera struggles a bit with sharpness and color balance.

When I snapped some selfies outside at night, the 3T's front cam took a picture that looked similar to what I got from a Galaxy S7, but the lack of HDR on the 3T's front cam meant that the Pixel XL's shot was easily the best. The Pixel's pic was brighter and sharper, and lacked the slightly greenish color cast that you see in the 3T's shot.

When I went inside, the 3T's front cam actually beat out the S7's camera for detail, but once again, the color balance was too heavy on the green side, resulting in an overall less appealing pic. As before, the Pixel XL's shot was the best, especially in my hair, where you can see individual strands as opposed to the less defined mop in the 3T's shot.

For video, OnePlus has added electronic image stabilization that works in tandem with the built-in optical image stabilization, so movies look super smooth. Image quality is still slightly behind what you get from the S7 and Pixel, though.

High-end phones from Samsung and Google remain the ones to get if you want the best photos. But the OnePlus 3T's cameras aren't that far off for a phone that costs hundreds of dollars less than those flagships.

Software and UI: Simple and clutter-free

The OnePlus 3T runs OxygenOS, which may be bit confusing until you realize it's just a customized version of Android built for OnePlus' phones. OxygenOS version 3.5.1 is based on Android 6.0, so you get standard Marshmallow features such as Doze (for better battery life), support for Google Now on Tap and more streamlined permissions when using apps.

The OxygenOS interface is pretty close to stock Android, too, so existing Android users shouldn't have any problem making the jump to the OnePlus 3T. A quick swipe down from the top reveals the notifications tray and a row of quick settings, while swiping left reveals a handy screen containing a spot for memos, your most recently used apps and contacts, and handy device info like your remaining battery and available storage.

OnePlus says that it should have a new version of OxygenOS based on Android 7.0 Nougat out before the end of the year. That should bring even more features, including a built-in multiwindow mode, a simplified recent apps menu, and nifty enhancements like direct replies and more granular notification settings.

One of the few complaints I had about the old OnePlus 3 was its middling battery life. By upping the 3T's battery capacity by 13 percent, from 3,000 mAh to 3,400 mAh, OnePlus increased battery life on its new phone by a full 2 hours.

On the Tom's Guide Battery Life Test, the 3T lasted through 10.5 hours of continuous web surfing using AT&T's 4G network, which is a big improvement over the 8.5 hours we got from the old OnePlus 3.

Compared to some other 5.5-inch phones, the Samsung S7 Edge's battery life was slightly shorter, at 10 hours and 9 minutes, although the Pixel XL and LeEco Le Pro 3 each lasted a bit longer, at 11:11 and 11:25. Still, OnePlus' phone used to lag behind the average smartphone battery life of 9:23, so the 3T is a definite improvement over its predecessor.

When you finally do exhaust the 3T's battery, OnePlus' Dash Charge is one of the fastest ways to fill a phone back up. I found that starting with just a 5 percent charge, I could get up to 65 percent or more of a full battery in just 30 minutes, enough juice to get through a whole day of use in my testing.

The previous OnePlus 3 was already the best phone for the money, and while the 3T's $439 starting price has upped the ante a bit, improved performance and an extra 2 hours of battery life are worth the extra $40. Really, it would probably be worth it for the battery life alone, because I'm willing to bet if you asked people if they would pay two Jacksons to get an extra 2 hours of battery life over their current handset, most would take that deal in a heartbeat.

The 3T's cameras aren't quite as sharp as the ones on the S7 or Pixel, and don't perform as well in low light. But for a phone that costs between $200 and $300 less, the photos are pretty close. Add in the 3T's handy notification slider, solid 5.5-inch screen and stylish aluminum body, and OnePlus has really covered every angle. Don't be sad that the OnePlus 3 has gone away; the 3T is more than a worthy successor and is the most value packed phone on the market.