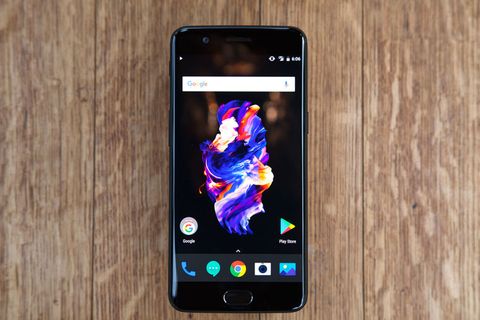 If you just want a solid phone at an attractive price, the OnePlus 5 has everything you need.

I'm often asked what phone provides solid features without any bells and whistles that people don't need. OK, here's your answer: It's the OnePlus 5.

Starting at $479, you get top-tier performance, dual rear cameras, an exceptionally colorful 5.5-inch full-HD screen and a simple aluminum body that still feels pretty premium. What the OnePlus 5 doesn't have are unnecessary squeezable sides, a nonprogrammable button that calls a digital assistant that's still not fully baked or support for mods of questionable value. The OnePlus 5 isn't flashy or covered in swaths of curvy glass; it's just a solid phone, and for a lot of shoppers, that's all you really you need.

The OnePlus 5's design is pretty simple, but I definitely wouldn't call it plain. While the phone features some pretty sizable bezels above and below the screen, both top and bottom margins are the same size, giving the OnePlus 5 a pleasingly balanced look. The $479 6GB/64GB and $539 8GB/128GB models look the same, but you will be able to choose from two colors: midnight black or slate gray, which is actually closer to a superdark navy blue.

OnePlus also paid special attention to the phone's curved sides — the aluminum wraps around back — so you don't have as many hard edges as you do with the OnePlus 3. I like how OnePlus paid attention to tiny, tiny things like the tab inside the phone's USB Type-C port, which has even been color-matched to the rest of the phone.

On the left side, the OnePlus 5 retains its signature Alert Slider —use it to adjust your phone's ringer with just a flick of your finger. It's basically an all-around better version of the mute switch you'd get on an iPhone. Below the screen, you'll find a handy fingerprint reader/capacitive-touch home button, flanked on either side by two more touch buttons for Back and Recent Apps.

The one design aspect that I think could have used a bit more attention is the OnePlus 5's lone bottom-mounted speaker. Even though it can put out enough volume to fill a small or midsize room, it just doesn't sound as rich or detailed as the dual-speaker setups you get on phones like the ZTE Axon 7 or HTC U11.

In keeping with the theme of not overwhelming you with features you may not need, the OnePlus 5's screen doesn't have a superhigh QHD resolution or support for HDR. But that's just fine, because its 5.5-inch, 1920 x 1080 AMOLED display is sharp and amazingly colorful. When I watched the trailer for Star Wars: The Last Jedi, the OnePlus 5's screen dazzled with deep orange flames and brilliant crimson dust clouds, pulling me even further into the galaxy far, far away than I normally would have been.

With a peak brightness of 394 nits, the OnePlus 5's screen doesn't shine quite as brightly as the Galaxy S8's (437 nits) or the Pixel XL's (396). However, that's not enough of a difference to cause problems when you're trying to look at the screen outdoors, even in direct sunlight.

The OP5's color range is where it really excels: It covered 220 percent of the sRGB spectrum, which is higher than both the Galaxy S8's (183 percent) and Pixel XL's (191 percent). And with a Delta-E rating of 1.65 for color accuracy, the OnePlus 5's display is fairly precise, too. (Delta-E numbers closer to zero are better.) The Galaxy S8 was better, with a rating of 0.36, while the Pixel XL was worse, with a score of 5.88.

Cameras: The primary camera is flagship class, the second not so much

Dual rear cameras? Surely, that must be an unnecessary extra, right? Wrong. With the feature now appearing in phones ranging from budget models that cost around $200 to flagships like the iPhone 7 Plus, this is a trend that isn't going away.

On the 5, OnePlus has included a very capable rear-camera setup featuring a 16-megapixel f/2.0 main camera and a 20-MP f/2.6 secondary camera with a 2x zoom. On the front of the phone, there's a 16-MP selfie cam that has twice the resolution you get from most other front-facing cameras.

Let's start with the positives: The 16-MP main rear camera is very good. It routinely captured shots with bold, rich tones and colors that sometimes were more accurate than what I saw from a Galaxy S8.

Take, for example, this indoor shot of some flowers under fluorescent lighting. While the OP5's photo is very slightly underexposed, it was able to nail the soft orange tint on the tulip in the back — something the S8 missed.

At the Bronx Zoo, results were even closer. In a shot of sea lions relaxing on some rocks, the OnePlus 5 produced a stunning shot that easily kept pace with the Galaxy S8. A close look reveals a bit more sharpness from the S8's pic — especially along the waterline — and a more neutral color balance, but the OnePlus 5 isn't far off.

When I took a picture of a neon Krispy Kreme sign at night, the OnePlus 5's photo is almost identical to the Galaxy S8's shot. Between the two, exposure and dynamic range are essentially the same. Once again, the S8's picture is just barely a bit sharper, but you have to do some serious pixel peeping before you can really discern a difference.

However, in a nighttime picture I took while waiting for the subway, the S8 showed why it's still the best camera phone. Compared to the OnePlus 5's photo, the S8's pic has less noise, better white balance and more detail on the dimpled warning mat and the buildings in the background.

But the OnePlus 5's camera features don't stop there, because the secondary 20-MP camera gives the phone a 2x zoom, in addition to a special depth mode than can mimic the shallow depth of field you'd get from a big DSLR or mirrorless camera.

Unfortunately, even though I like the addition of a 2x zoom, the OP5's secondary 20-MP camera still needs a fair bit of improvement. If we go back to a 2x shot of our friendly sea lions at the zoo, the 5's picture doesn't any look better than what I got from the S8 when using its 2x digital zoom. The OnePlus 5's shot looks soft, and it's simply not as detailed as a 20-MP photo should be.

Thankfully, the OP5's depth mode is much more proficient, offering a great way to throw soft focus on background objects so that your subject will really pop. All you have to do is swipe left on the Camera app's live view, position your subject between between 1 and 6 feet away, and let the camera do the rest.

In front, the OnePlus 5's selfie cam is fantastically sharp. It caught all the tiny details in my hair and face, while also doing a nice job of not blowing out the details in the background. And in case you might want to try to hide some imperfections, there's a built-in beauty mode, too.

Performance and Graphics: The best you can get right now

The OnePlus 5 is just the third phone to launch this year with Qualcomm's Snapdragon 835 processor — the Galaxy S8 and the HTC U11 are the others — and it's also the cheapest. So if you're on quest to get the best performance per dollar, the buck stops here. But more important, the OnePlus 5 is available with either 6GB or 8GB of LPDDR4X RAM, which not only puts most similarly priced laptops to shame, but also helps with battery efficiency. And it lets you run up to 34 apps in the background before you need to prune things back.

Powerful components aren't the only things this phone offers; OnePlus has put serious time into making things run smoothly, too — and it shows. During development, OnePlus took high-speed videos of the phone to figure out when the UI lagged or skipped, and then worked on preventing those lags. The result is that no matter if you're swiping between pages on the home screen or cycling through a ton of apps, the OnePlus 5's UI responds like lightning as you navigate around the phone.

On Geekbench 4, which measures overall system performance, our 8GB OnePlus 5 review unit scored 6,542, which is even better than the Galaxy S8 (6,124), even though both phones sport Snapdragon 835 CPUs. Credit the speed to the OnePlus 5's superfast RAM. And when compared to phones featuring last year's Snapdragon 821 processor, such as the Google Pixel XL (4,146), it's pretty clear how much more powerful the OnePlus 5 is than most of its competition.

The same goes for web-browsing performance, where the OnePlus 5 posted a strong score of 70.19 on the Jetstream 1.1 Javascript test. That's slightly better than the Galaxy S8's 67.5, and way better than the Pixel XL's 55.93.

The OnePlus 5 runs OnePlus' Oxygen OS, which is a very lightly tweaked version of Android 7.1. That means you get important features such as the Google Assistant (just hold down the home button for a second or say "OK, Google" to summon the assistant), along with things like a built-in blue light filter and split-screen mode.

Some of OnePlus' customizations include features such as the built-in reading mode, which makes the phone's display look a littler warmer, and integration with the phone's hardware Alert Slider. There's also a selection of handy gesture controls, so you can do things like open a specific app by drawing a "W" on the screen or skip to the next track in your playlist by drawing a ">."

If you're concerned about getting the latest security patches and Android updates, our OnePlus 5 review unit runs the May 1 security update. Additionally, OnePlus was one of the first OEMs to update its previous phones from Marshmallow to Android 7 Nougat, so we're hoping that the company can keep that trend going and deliver speedy updates for the next version of Android, too.

Despite a battery that's 100 mAh smaller than the one on last year's OnePlus 3T, the OnePlus 5's battery life is much, much better. On the Tom's Guide Battery Test (continuous web surfing over T-Mobile 4G LTE), the OnePlus 5 lasted a truly impressive 13 hours and 6 minutes. That's good enough to land the OnePlus 5 inside the top three on our list of the longest-lasting phones on the market. In comparison, the Galaxy S8+ lasted 11:04:39, and the Pixel XL lasted 11:11.

When you need to recharge your phone, the 5 still boasts OnePlus' superfast Dash Charge, which sends 20 watts to the phone (5 volts at 4 amps); the feature promises to add a day's worth of power in just half an hour. Those figures aren't an exaggeration, either. After draining the 5 bone dry, I plugged it in to recharge and got back to 60 percent of a full battery in just 15 minutes — more than enough juice for a whole day's use.

The OnePlus 5 is a prime example of a focused device executed to perfection. The phone's processing power is as good as it gets, its no-frills aluminum body is refreshing in an increasingly glass-obsessed category, and its battery life is one of the best we've ever seen. You even get two versions, at $479 and $539, to best match the kind of performance you need.

Really, the OnePlus 5's biggest issue is that you won't be able to use it on CDMA networks like Verizon or Sprint. I also wish OnePlus had been able to find room for a more powerful speaker and some expandable storage, but the 5's dual rear cameras and excess of RAM more than make up for those minor quibbles. So for all the people who just want a simple, solid device at a good price, your phone has arrived. Say hello to the OnePlus 5.