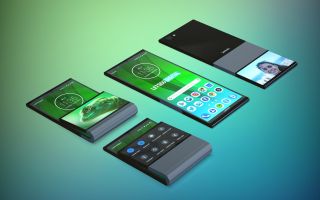 We don’t know if phone manufacturers are forcing their engineers to binge on sci-fi series while licking LSD lollipops, or what. Whatever they are doing, it’s working. Check out Lenovo’s latest foldable design.

Rendered by Dutch tech blog and obsessive patent digger Let’s Go Digital, Lenovo’s clamshell design looks completely different from anything we have seen so far in the foldable phone invasion.

Then you notice a peculiar treaded hinge design that seems to allow the user to fold the phone at any point along the hinge’s surface. The design reminds us of the one used in the Microsoft Surface Book.

The other thing you notice is that, no matter where you close it, the phone’s body doesn’t cover the entire display, leaving some part of the top exposed. ZTE has a design that uses the same partial closure idea, allegedly to show notifications without the need to add a secondary screen like the Samsung Galaxy Fold.

Then, unlike the Lenovo and the ZTE, there a Sharp’s foldable design that allows you to leave part of the inner display exposed but also close it completely—thanks to a two-hinge design.

But while ZTE and Sharp’s design rely on its internal screen for everything, Lenovo’s patented design includes a secondary screen that can fulfill multiple roles—like showing notifications or accessing settings quickly.

We have no clue about how the Chinese company is going to use two exposed screens. But the thing is: it doesn’t really matter at this point. As manufacturers get ready to ramp up production of foldable phones—with Huawei’s CEO claiming that half of its flagships will be foldable in two years—the fight for the perfect form factor is brewing.

While this design is just a patent, it’s refreshing to see so many different form factors ideas coming from every Android manufacturer.