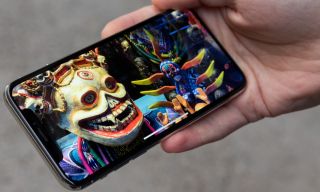 Apple is said to be working on three new iPhones for this year. And now the largest of the bunch is purported to have been leaked.

Over at Forbes, contributor Gordon Kelly shared what is claimed to be the schematics for Apple's iPhone X Plus. It's impossible to verify the leak, but it provides some hints of what Apple could be planning for the company's biggest handset ever.

The first thing to notice about the schematic is that Apple appears to be sticking to the same design concept it's offering in the iPhone X, complete with a screen that covers the face, a small chin area at the bottom, and a notch at the top. However, the notch in the schematic, which will house the earpiece, front-facing camera, and Face ID components, appears to be slightly shorter than the one you'd find in the iPhone X.

MORE: Case Maker Just Leaked the iPhone of Our Dreams

On the rear, there appears to be some debate over what we're seeing. The schematic clearly shows a vertically aligned set of cameras. Forbes, which also obtained the schematic, claims that it's a triple-lens camera. Others, however, are saying that the schematic is showing a dual-lens camera that also features a flash. The small dot next to the middle component appears to be a sensor, which would follow the same camera design in the iPhone X.

Just recently, there was talk that Apple might opt for a triple-lens camera system in the iPhone X Plus instead of the familiar dual-lens camera array. This would allow it to offer advanced augmented reality features. But one report had this triple-lens camera not appearing until 2019.

Based on this leak, there aren't many other differences in the design of the iPhone X Plus compared to the iPhone X. And that's been one of the more persistent rumors of late. But there have also been rumors suggesting that this year's iPhone X units would come with smaller notches than last year's version.

So, there's reason to believe that what Forbes has presented here is actually accurate. And it's also possible that a triple-lens iPhone X Plus is in the offing.

But what about the smaller, LCD-based iPhone? Forbes, with Ghostek, also published schematics of what they claim is the 6.1-inch LCD iPhone. It comes with a design nearly identical to the iPhone X and iPhone X Plus, but has a single lens camera on the rear. It also appears that the bezels around the display are slightly thicker.

As per usual, Apple won't confirm any plans until it's ready, so expect many more rumors to surface before the company releases its three new iPhones in September.