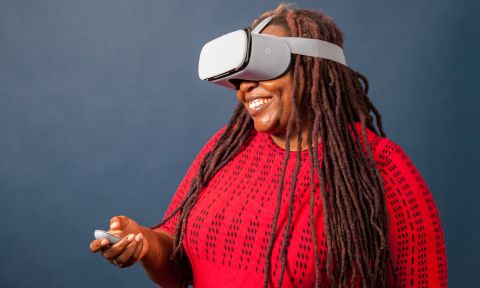 When it debuted in 2016, the Google Daydream View turned heads with its unique design, innovative controller and affordable price. Google is keeping the trend going with a revamped version of its virtual-reality headset. Priced at an affordable $99, the headset has gotten a subtle makeover to make it more comfortable and stylish as well as more immersive. For the price, it's one of the best VR headsets available on the market.

The new Google Daydream View sports nicer fabric and a bit more weight than its predecessor. Available in charcoal, fog and coral, the new color scheme falls in line with that of the new Google Home Minis and helps achieve a cohesive design language between the company's products. I was really excited about the idea of a pretty pink VR headset, and I was more than a little disappointed when Google sent the "fog" iteration. Don't get me wrong; the gray material is very handsome, but it's such a safe color.

The headset has many of the same adornments as the previous Daydream, including the little rubber "G" positioned on the left. The front flap where you secure your Google Pixel 2 or Pixel 2 XL (or any Google Daydream-enabled smartphone) is still held in place by a braided elastic band held fast by a gray plastic notch at the top of the headset.

The flap's interior is made of a light-gray soft-touch material. But the band that held the controller in the previous version is gone; instead, it's repositioned along the back of the rear-mounted gray head strap. Speaking of head straps, the new Daydream View has a top band to ensure the headset stays in place. But if the top band isn't for you, you can easily remove it by sliding it off the fasteners holding it in place.

Although the new Daydream View is slightly heavier than its predecessor, it still manages to be more comfortable. The headset's interior is lined with a thicker layer of foam than any headset I've used thus far, including premium devices like the Oculus Rift and the HTC Vive. Outside of the lenses and interior framework, the entirety of the View's insides are made of that plush foam wrapped in soft, breathable fabric, which should help wick off the moisture for those of us who break into a sweat at the faintest hint of heat.

I wore the headset for 2 hours and 15 minutes with no problems. The upper portion of my face was enveloped in a soft, squishy hug. And while the original View is comfortable, it's not as padded and soft as the new one. As far as the extra weight, the top-mounted strap distributes the weight evenly, so it never feels front-heavy.

The biggest change on the Daydream isn't immediately noticeable, but it makes a world of difference. Google has expanded the field of view (FOV) from 90 degrees to 100 degrees.  That puts the View on a par with the latest model of the Samsung Gear VR, which boasts a 101-degree FOV.

The seemingly small change affects how immersive the scene in front of you appears. A wider FOV means sharper detail, which comes in especially handy for reading text. Yes, you'll still have some blurring around the outer edges, but that sharpens up pretty quickly once you look in that direction.

The biggest change on the Daydream isn't immediately noticeable, but it makes a world of difference.

Alas, my dreams of an integrated sound system with the Daydream View continue to evade me. In lieu of relying on your smartphone's speakers (especially those with front-mounted components), the Daydream View requires you to pull out a pair of cans or buds in order to hear the action. I'd be interested in seeing how the Razer Phone's Dolby 3D Audio sound would hold up, but unfortunately, it isn't Daydream-compatible.

Although the headset has gotten a makeover, nothing has changed about the View's bundled controller. The plastic gray peripheral is still rounded along the top, bottom and sides to stay comfortable in your hand. The large, circular depression at the top of the controller is a quick and responsive touchpad, with the Apps and Home buttons directly below it. A quick press of the Home button returns you to the main screen, while a longer press recenters both the controller and the headset orientation.

A pair of volume buttons sit along the right of the peripheral, toward the top right, and there's a USB Type-C port at the bottom to recharge.

The Daydream interface hasn't changed from when I first reviewed it. That means you still have the floating-tile interface set in the woods. The main home screen is set in a lush, green valley complete with a majestic waterfall with subsequent pages of tiles sporting different nature-themed scenes.

The Library menu displays all your purchased apps on a 5 x 3 grid. Selecting the Settings menu reveals a pair of clocks with the date, along with Wi-Fi and battery indicators. Below that sit icons to disable the Wi-Fi, recenter the headset and controller, mute the audio and change the controller orientation from right to left.

One thing I'm missing from the interface is the voice command featured on the Gear VR and Microsoft's new mixed-reality headsets, such as the Acer Windows Mixed Reality AH101. With Google adding its Assistant to headphones like the Bose QuietComfort 35 II, I'm surprised that it didn't make the functionality available for the Daydream platform. The controller is nice, but it would be really great to navigate the virtual setting with a few simple phrases.

I'm also anxiously awaiting the arrival of Daydream 2.0 Euphrates, the Android 8.0 (Oreo)-powered update to the Daydream platform. Google announced the update during this year's Google I/O conference and said Euphrates would make content easier to discover by introducing curated lists onto the main home screen. The update would also bring Google Cast support so you can share your VR content to a nearby television, along with a new VR window manager that would allow people to interact with your smartphone's notifications in VR. That means you can answer that phone call without ever having to take off the headset.

The Daydream View library has had some time to grow from 30 pieces of content to over 200 apps, games and experiences. However, it still has a long way to go to catch up to the Gear VR, which has well over 600 titles in its stable.r. Similar to the Gear VR, Daydream has a good mix of free and paid content. Paid content ranges from 99 cents (Zombie Rush Coaster) to $14.99 (Need for Speed: No Limits VR).

I played the multiplayer magic-dueling title Wands on both the Daydream View and the Gear VR and couldn't point out any real visual difference. I could easily read the text describing my available spells. And when I was matched up against another wizard, my triple fireball attack connected, covering them in a bright blanket of red, yellow and orange flames. When I switched over to Bandit Six: Salvo and started placing turrets, I was treated to thick billows of smoke from planes foolish enough to fly into range.

I played the magic-dueling title Wands on both the Daydream View and the Gear VR and couldn't point out any real visual difference.

While there are some apps, games and experiences that appear on Daydream that are also featured on the Gear VR and other VR platforms, Google is doing a good job of securing exclusives. For instance, you have the engaging Eclipse: Edge of Light, which has you explore an alien planet via jetpack.. I'm also a big fan of the first-person shooter The Arcslinger, which pits you and your trusty revolver Angelheart against hordes of bad guys in a futuristic Western setting.

Running virtual reality is taxing on a full-blown PC, so imagine how your smartphone's CPU and GPU hold up. I spent 15 minutes flinging fireballs and homing spells in Wands.Afterward, I measured the Pixel 2 XL's rear panel with a heat gun, as I could feel the heat emanating from the phone through the foam face guard. I saw a reading of 114 degrees Fahrenheit, which is warm to the touch but not uncomfortably so. I went on to play several titles over the course of an hour and didn't notice any slowdown from the smartphone's Qualcomm Snapdragon 835 processor.

We tested the Daydream with a  Google Pixel 2 XL, which is a pretty long-lasting phone. It endured 12 hours and 9 minutes on our battery test, which consists of continuous web surfing over a 4G LTE network during stand-alone battery testing.

After strapping the Pixel 2 XL into our Daydream, I spent 2hours watching Netflix and playing games in VR. The smartphone's battery life dropped from 100 percent to 71 percent. I ran the same test on the Gear VR with a Galaxy S8, and the phone had 77 percent battery life left at the end of the 2-hour test.

The bigger, plushier foam plate cements the Daydream View as the most comfortable VR headset on the market.

In an effort to get more people on the Daydream bandwagon, Google has worked with other smartphone manufacturers to make their handsets Daydream-compatible. So, in addition to the original Pixel and Pixel XL, the VR headset works with the Pixel 2, Pixel 2 XL, Samsung Galaxy S8, S8+, Note 8, Huawei Mate 9, ZTE Axon 7, LG V30, Motorola Moto Z, Z2 and Asus ZenFone AR.

Daydream View's second act has shown that Google is ready to stop playing catchup and start taking the lead in the mobile VR space. The new headset's expanded field of view makes for a more immersive experience, and the aesthetic design changes — such as the bigger, plushier foam plate — cement the Daydream View as the most comfortable VR headset on the market. Google has also done  delivered a slew of content, including original apps and games, instead of relying on ports. In addition, the View is $99, making it cheaper than the $129 Samsung Gear VR, and it works with a variety of non-Google smartphones..

But as far as the Daydream View has come in a year, it's still chasing the Oculus-powered Gear VR. Oculus is a content juggernaut, pushing out new games, apps and experiences every month, and the Gear VR's voice-command functionality is innovative, future-forward and accessible. Overall, though, the Daydream View is an excellent choice for people who want to experience high-quality VR at an affordable price and don't want to be locked into Samsung/Oculus' ecosystem.