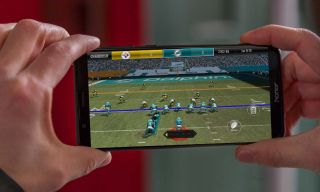 Hearthstone: Heroes of Warcraft is a fun, free and fair digital collectible card game that you won't be able to stop playing. Playing as one of the great heroes (or villains) of the Warcraft universe — such as Thrall, Jaina Proudmoore or Gul'dan — you'll fight epic duels and summon allies and minions to your side. The easy-to-learn rules work cross-platform among PC, iPad and Android players. You can earn gold that can be spent on booster packs. Plus, in the Arena mode you can play in a special, "sealed draft" format that rewards canny deck building and smart play.

Double Fine's adventure Broken Age, the game that helped start gaming's crowdfunding revolution, goes mobile. Broken Age tells the story of two teens, each struggling against traditions that bind them. Deep in the bowels of a starship, Shay Volta is trying to escape the clutches of a stiflingly maternal AI, while Vella Tartine has been chosen to be sacrificed to a mysterious monster in order to save her village. Gorgeously rendered 2D graphics, a neat soundtrack and a genuinely well-built adventure make Broken Age a keeper.

The sequel to Alto’s Adventure retains all the simplicity and charm of the original while adding new gameplay elements. In Alto’s Odyssey, the scene switches from snowy landscapes to dunes and desert vistas, but you’ll still pull off tricks to avoid hazards as you collect coins. The new game adds environmental elements — tornadoes, balloons and more — to bring new challenges to the game. You can play for free if you don’t mind ads, though you can also remove those via an in-app purchase.

R.B.I. Baseball 19 is more than the usual annual upgrade of this baseball game for the current MLB season. Sure, player models are up to date and the game features 2019 uniforms. But the real welcome addition is a new Franchise Mode that lets you run a team across multiple seasons, tweaking the roster to bring home a pennant. Hardcore baseball fans will also appreciate the ability to play with more than 165 all-time greats, as a Legends team can take part in Exhibition Mode.

Prepare to be wowed by Gameloft’s Asphalt 9: Legends, with the latest edition of the racing series focusing on blazing fast hypercars from prestigious manufacturers like Ferrari, Porsche, Lamborghini and W Motors. The game lets you make each car your own with customizations that can include materials, colors, and rims. You can then take it out for a spin in a career mode featuring more than 60 seasons and 800 events, as well as in online multiplayer. Asphalt’s focus is squarely on arcade fun rather than realism, with nitro pulse speed boosts and 360-degree knockout spins, combined with slick, hyper-detailed cars and console-quality visual effects.

Now available on Android, Monument Valley 2 is a sequel that improves on the original. This new game brings back the mentally stimulating puzzles of its predecessor, adding with color and light. You also can now control a second character — the heroine Ro is joined by her child on this journey. Even with these changes, the new Monument Valley maintains the minimalist look and immersive music that made the first game such a joy to play.

If you've got the mobile device to support it, Rome: Total War is a great addition to Android. The long-awaited Android port delivers a real-time strategy offering built for your device's touchscreen controls. You marshal everything from legionaries to elephants and chariots as you try to control the empire, playing as one of 19 factions. You're in charge of managing economic, civic and religious affairs, too, but it's the battles that really set this game apart.

The latest Final Fantasy epic makes a smooth jump from console RPG to touch screen devices in Final Fantasy XV Pocket Edition. This episodic mobile RPG captures the core story and charm while cutting down on the grind common to the genre. You’ll appreciate the “chibi”-style graphics which still manage to capture many of the same story beats and combat complexities. The first episode is available as a free download; you can buy subsequent chapters via in-app purchases or as one bundle.

An officially licensed app from the professional tournament for high-level poker players, World Series of Poker (WSOP) focuses on bringing the cutting edge competition right to your phone. You can play with friends or with online opponents to hone your skills and get on the world leaderboard. The game aims to make you a better poker player, and the extensive statitstic tracking will help you improve your poker game. If you're feeling all pokered out, you can take a break by playing the virtual slot machine and get chips to fuel your next poker campaign. If your goal is to be a Las Vegas pro, this is the app for you.

Now that HQ Trivia is available to all Android users, it's easy to see how this trivia app has taken the mobile world by storm. Start with accessible trivia questions, add in live hosted games and finish it off with real money payouts, and you'll soon find yourself counting down the minutes to the daily 9 p.m. ET quizzes (plus the occasional midday quiz). Each game usually features 12 multiple choice trivia questions, with players getting 10 seconds to answer each one. Get all of them right, and you get a slice of the prize, which has been cash, though HQ is now awarding points as prizes in some games. In addition to classic HQ, you can also try your luck at games that focus on sports trivia and word puzzles.

Nothing brings a party together like getting people to dance. Still, not everyone knows how to dance, which is where Just Dance Now comes in. This mobile spinoff of the hit console series brings more than 200 titles to iOS and Android smartphones, including "Uptown Funk" by Mark Ronson, "Jailhouse Rock" by Elvis Presley and (for some unfathomable reason) “Hungarian Dance No. 5” by Johannes Brahms.

While the game is free to download, you'll need to pay for most songs. However, you can buy a temporary pass for as little as $1 per hour — great for a single night of entertainment. You can also cast it to a big screen via Google Cast or Apple AirPlay.

Why We Love Android Games

When it comes to mobile gaming, Android no longer finds itself in the shadow cast by the iPhone. And that's good news if you've gotten your hands on game-friendly phones like the Galaxy Note 9, ROG phone or Razer Phone 2 — or really, any brand new Android phone ready to fill up with all kinds of games. Browse through Google Play, and you’ll find a surplus of top games across a wide variety of genres. Whether it’s action and adventure, puzzle games, or titles that the entire family can enjoy, our roundup of the best games available for Android offers something for every kind of gamer.