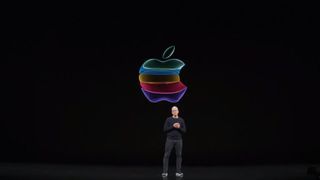 Apple events, like this week's iPhone 11 launch, carry expectations you don't find at your typical tech company press conferences. Partly that's because of Apple's reputation for showmanship and history of eye-popping product debuts. But it's also because Apple doesn't shy away from goosing expectations in the build-up to its event.

Take the iPhone 11 launch. Apple could have just announced a time and place, and I assure you, the media would have shown up. Instead, it sent out an invitation with the words "By Innovation Only," and you could be forgiven if that made you think Apple had something truly special up its sleeve for the big event.

If that was the case, then Innovation must have forgotten to RSVP.

It's not that the products Apple announced this week — the iPhone 11, iPhone 11 Pro, Apple Watch Series 5 and a new 10.2-inch iPad — are disappointments. They appear to be solid improvements over the products they're replacing, with new features that are more likely than not to please anyone who ponies up for one or more. We'll have to spend time actually testing everything Apple announces, but there's nothing here that screams "misfire" or "missed opportunity."

But the new products don't even whisper "innovation," either. Phones with faster processors, improved cameras and longer batteries? Those are all good things to have, but they're also what you'd expect from an iterative smartphone update. The screen on your smartwatch is always on now? I'm sure Apple Watch owners will appreciate it, but it's not exactly Edison running out of the lab shouting "Eureka," is it?

Look, every company can be forgiven for hyping up an otherwise run-of-the-mill product update. And "By Innovation Only" is a hell of a lot punchier than "Here's enough improvements and enhancements to finally get you folks holding onto your iPhone 7 to finally upgrade" as a marketing slogan. But Apple was laying it on a bit thick at Tuesday's press event.

"At Apple, we put the customer at the center of everything we do, with products and technologies designed in the service of humanity," CEO Tim Cook said at the outset of this week's press event. As statements of purpose go, that's a lofty goal, but I'm not sure how it applies to a smartwatch with an always-on display. "We've always believed that by giving people wonderful tools, you enable them to do wonderful things," Cook also said, which is certainly true enough — Apple has the video of people talking about how the Apple Watch saved their lives to prove it. But it sounds pretty highfalutin when you say it at an event where one of your big reveals is a front smartphone camera that can take slow-motion selfies.

Apple also provided updates on its subscription service plans during this week's event, but apart from the lower than expected $5-a-month cost for Apple Arcade and Apple TV+, anything truly innovative there must have happened on an alternative feed I wasn't watching. The trio of games Apple showed off as Arcade exclusives seemed nice though not head and shoulders above anything you could find on any gaming platform. As for that promo for the Jason Momoa/Alfre Woodward series See — which took up 2 minutes, 46 seconds that Apple could have spent talking about literally anything else — could have easily passed for something on Amazon Prime or Netflix.

Again, you can't fault Apple's marketing machine for trying to, you know, market things, and this isn't going to be the first time in recorded history that a company oversold something in the service of stoking public interest. The problem with Apple's hard sell at this particular point in time is it shines an extra bright spotlight on how ordinary everything they've put forward is.

Tim Cook can describe Apple TV+ original programming as "stories that help you find inspiration, that are ground in emotion," and they could well prove to be that come the service's launch on Nov. 1. But right now, they don't look any different from streaming shows you can find elsewhere. Even things that are generally welcome, like the new Night Mode for taking better low-light photos with the iPhone 11 and iPhone 11 Pro feel more like responses to other phone makers who've handled the task better than Apple breaking new ground.

Look, Apple's going to be just fine, even if this round of products generates more of a "hmmmmm" than a "wow." But there's no getting around the fact that the company faces a unique set of challenges at this point in time.

Apple's more envelope-pushing products are still in development — start your iPhone 12 rumor-mongering now and beat the crowd — and if it pulls off something like the AR glasses that are reportedly on the horizon, feel free to print out this article and wave it derisively at me the next time you see me. At the same time it continues to work on more ground-breaking stuff, Apple's trying to ramp up new subscription-based products that can keep it growing even with smartphones and tablets become more appliance-like by the moment. And it's got to do all this without taking its eye off its existing products — something where Apple is experiencing mixed results if the misfiring keyboard on this 2018 MacBook Air I'm using right now is any indication. That's a lot of balls to keep in the air right now, even for a company with Apple's talent pool.

As we saw this week, Apple's strategy seems to keep pushing the same message, even if these days, Cupertino is giving us more inertia than innovation.