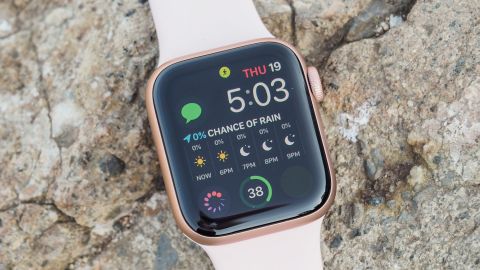 The Series 5 is the best smartwatch you can buy. But if you don’t want all the bells and whistles, the Series 3 is a worthy runner-up.

It sounds a bit silly, that the Apple Watch can now tell you the time all the time. But alongside the heart health diagnostic tools that made the Series 4 so essential — including the ECG app — a built-in compass and the watchOS 6 features that improve just about every part of the Apple Watch experience, the Apple Watch 5's always-on display cements the Apple Watch’s place as the best smartwatch you can buy.

The Series 5 is available to buy in stores and online, starting at $399 (£399) for the smaller aluminum 40-millimeter model with GPS. For an extra $100, you can splurge on a cellular-enabled watch (which also requires a monthly data plan from your wireless carrier for an additional cost).

If you want something that looks and feels a little more high-end than aluminum, the stainless steel Series 5 starts at $699 and the new titanium model is $799. If you really feel like balling out, the white ceramic special edition is back for $1,299.

The Series 5 replaces the Series 4, which is no longer available through Apple but can be found for a steal from third-party retailers. Apple is still selling the 2-year-old Series 3 for $199.

Be sure to check out our Apple Watch deals page to see the latest discounts on Apple's smartwatches.

I’ve used almost every other smartwatch on the market, and most of them have always-on displays. But that just means you can always see the time — that’s it. Apple’s version of an always-on display is a little extra.

The Series 5 doesn’t simply show you what time it is. When inactive, the display shows you a dimmer version of all the information on your watch face. I usually use the Infograph Modular watch face, which has six complications along with the time, so I have access to my most-used apps (Workout and Messages) as well as bits of information like the weather and battery percentage. I can still see all of that when the display dims.

The difference is even more stark with brighter watch faces like Meridian, which has an almost entirely white background that dims to black when you lower your wrist.

The display’s ambient light sensor can detect how bright your environment is and adjust itself accordingly, so the display is never too bright or too dark.

When you’re using an app, the always-on display dims and blurs the background to show you the time when it’s inactive. This applies to all but the Workout app, which still displays all of your metrics even when you’re not actively looking at the watch.

The only difference is the time elapsed, which refreshes every second instead of counting milliseconds. This feature is incredibly useful while running, because I no longer have to fully raise my wrist to see my pace or the time. Even in bright morning daylight, I had no problem seeing my stats on the darkened display.

To save battery, you can turn the always-on part off (just open the watch’s Settings app and toggle it off under Display & Brightness).

I think I might have actually yawned when Apple announced that one of the headlining features in the Series 5 is a built-in compass.

It just didn’t thrill me the way the FDA-cleared ECG app did when the Series 4 was announced last year. But I realized just how useful the Compass app could be when I wore the watch on a 2-mile hike through Runyon Canyon. I’m a new transplant to Los Angeles, where dozens of urban hiking trails are just a few miles from my doorstep. A compass isn’t  really necessary on these trails, because I can usually see L.A. landmarks like the Hollywood sign to orient myself. If I can see Griffith Observatory to the east and the ocean to the west, I’m set.

But Compass isn’t the only app that takes advantage of the watch’s built-in magnetometer. Apple is opening the Compass API to third-party apps, and is also using it in its own Maps app to enable a feature that shows you which direction you’re facing. This was incredibly useful after I parked at the base of Runyon Canyon Park and had to figure out which trail to take. Maps consistently showed me which trail I was on and how far into the park I was, which helped me realize when I needed to cut the hike short and head back.

I can see this feature being even more essential when camping or hiking in more remote areas. Thinking back to a time I got lost hiking in Sedona as a teen in the pre-smartphone area, this feature would’ve been a life-saver. (Not literally for me — I clearly survived — but for someone else.)

It should be noted that certain watch bands will interfere with the Series 5’s built-in magnetometer. Basically, any band with a magnet in it will throw off the compass’s ability to perform, so if you’re heading out for an adventure, leave the Milanese Loop or Modern Buckle at home.

I usually wear my Apple Watch from the time I wake up to work out in the morning ‘til the time I take it off to go to bed — usually around 16 hours a day. Older watches, particularly the Series 3 and Series 4, could last much longer than that, but I never wore them to track my sleep and so I charged them every night.

The Series 5’s always-on display doesn’t seem to be much of a battery drain — at least not as much as the Series 3’s cellular connectivity was when that watch debuted. After a full 14-hour day of putting the new watch through rigorous testing, which included installing apps, testing out Maps and Compass, logging my cycle, asking Siri various questions, and tracking a 3.75-mile run and a 2-mile hike as separate workouts, I was down to 10 percent. And I almost never use my watch that intensively.

I’ve resigned myself to charging my Apple Watch daily. I wish I could squeak by on two days, just in case I forget to put it on its charging stand, but now it’s become a routine: plug in my iPhone to charge and put the watch on its magnetic charging cable just before bed.

Rival smartwatches from Samsung, Fitbit and Garmin offer multi-day battery life, but those watches also aren’t as fully featured as the Series 5. For now, it’s still a trade-off.

The Apple Watch hasn’t seen a major redesign in, well, ever. The Series 5 looks identical to the Series 4 in every single way.

Apple introduced a new titanium finish, which is lightweight to slip on and looks stylish in person, and brought back the white ceramic edition, which is a premium watch with a price tag ($1,299) to match.

The classic aluminum version is still the one most people will buy. And Apple is now allowing you to customize the watch finish and band before you buy, instead of having to take whatever comes in the box and then picking out the strap you actually want.

You don’t need a Series 5 to gain some of the best new Apple Watch features. Most of what I love about using the Series 5 is the latest software, watchOS 6, which is available as an over-the-air upgrade for the Series 3 and 4, too.

My favorite new features include the new Cycle Tracking app for logging period flow and symptoms (more on that in a minute), the Calculator app, which will save relationships with a built-in tip calculator, the Noise app for monitoring decibel levels and the new independent Watch App Store. And that’s not even half of the improvements Apple delivered in this release. There’s a lot to love about watchOS 6.

I’m not surprised that it took so long for a Calculator app to arrive on the watch, given that the iPad still doesn’t have a native version, but I might never use my iPhone’s calculator again. The watch app’s tip calculator is a god-send, particularly because you can adjust the percentage and calculate how much each person owes for a group dinner. If you have a few drinks and forget how to math, the Apple Watch does the work for you.

The Watch App Store is perhaps the most obvious gamechanger, because you no longer need to install watch apps from your iPhone. This means that app developers don’t have to create iOS apps first and then make watch extensions, which should make watch apps more useful and specific. I wonder when Apple will allow Apple Watch buyers to set up the watch without an iPhone, too, which is now the biggest thing keeping the watch from being a completely independent device.

Apple isn’t reinventing the wheel with Cycle Tracking, but the fact that women can now track periods on the best smartwatch on the market, in addition to all of the other features that make it great, is a welcome change.

I’ve used similar features from Fitbit and Garmin, and the functionality is the same. You self-report your periods to start, and then the watches can start accurately predicting when the next one will begin. I’m still in the early stages of using the Apple Watch’s Cycle Tracking app, so I haven’t tested out its predictions or notifications, but I appreciate the level of detail I’m able to enter when it comes to period flow, symptoms and spotting. You can also add details about ovulation test results, cervical mucus quality and basal body temperature in the iPhone Health app, and allow Cycle Tracking to predict your fertile window if you want to use the app to plan or prevent pregnancy.

To get started with period-tracking, you’ll need to input your information in the iOS Health app, including details like the first day of your last period, length of your cycle and typical period length. Then you can start logging your period in the Cycle Tracking app on the watch, and even add the app as a complication on the watch face for easier access. I plan to keep it as a complication during my period and then swapping it out for another app in between. (Thankfully, the complication icon is subtle, if you’d rather the always-on display didn’t announce the app’s presence to the world.)

After a Privacy International study showed that popular period-tracking apps might be leaking information about your personal health and sexual activity to companies like Facebook, Apple’s on-device, hands-off approach to health data makes its version of this feature even more compelling.

Compared to past Apple Watches, which delivered then-groundbreaking features like GPS and water-resistance (Series 2), cellular connectivity (Series 3) and medical-grade health features (Series 4), the Series 5 is an incremental upgrade. But Apple has set the bar for smartwatches almost impossibly high — even for itself. Rival smartwatches may have had always-on displays first, but they lag far behind the Series 5 in almost every other way.

The Series 5 is the smartwatch to beat for iPhone owners buying their first watch (or upgrading from a Series 2 or older). For Series 4 owners, installing watchOS 6 will deliver many of the best new features. Series 3 owners should consider upgrading for heart health features and the always-on display. But if you don’t want the Series 5’s bells and whistles, the $199 Series 3’s new low price is worth every penny.