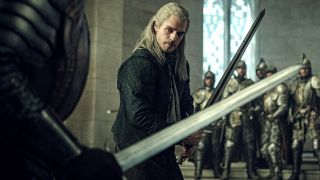 Henry Cavill will be back for The Witcher season 2, continuing Netflix’s fantasy drama. Yes, get ready to toss another coin at The Witcher, which will feature more creatures, new characters, and bigger battles.

The first season followed Cavill as the titular Witcher, a solitary monster hunter named Geralt of Rivia, as well as the sorceress Yennefer (Anya Chalotra) and princess-on-the-run Ciri (Freya Allan).

Season 2 will continue to build out the world of The Witcher, which is based on the book and story series by Polish writer Andrzej Sapkowski.

Here’s everything we know about The Witcher season 2 including its release date, cast, plot, and more.

The Witcher season 2 release date: when is it coming out?

The Witcher season 2 does not yet have a release date.

Netflix renewed the series for a second season in November 2019 — before the first season had even premiered. In the announcement, Netflix said that the eight-episode season 2 will begin production in early 2020 in London for a planned debut in 2021.

In a Reddit AMA, showrunner Lauren S. Hissrich clarified, "We don’t yet have a target launch date for S2, past 2021. We don’t want to rush the product. That doesn’t benefit anyone."

A Reddit user posted a screenshot of Production Weekly which indicates filming will begin in February 2020 in London and Budapest. Filming for the first season lasted about seven months and then the show premiered seven months after that. If The Witcher season 2’s schedule is similar, it will likely debut March or April 2021.

The Witcher season 2 cast: who’s in it?

Henry Cavill, Anya Chalotra and Freya Allan are all confirmed to return as the three main characters Geralt, Yennefer and Ciri.

As for new cast members, Hissrich teased on Reddit that, "There’s a whole new set of fun characters coming in S2." That includes LGTBQ+ characters. "One of my favorite things about the books is that they are full of subversion," Hissrich said. "Yes, we’re gonna represent."

Rumors are also swirling that season 2 will introduce Nivellen, a man cursed to turn into a beast who comes across Geralt in Sapkowski’s short story "A Grain of Truth."

Another possible addition is Vesemir, the eldest and most experienced of the Witchers and a father figure to Geralt. Fans have been clamoring online for Star Wars legend Mark Hamill to play Vesemir. And Hamill is not opposed — even if he has no idea who or what Vesemir and The Witcher are.

The showrunner explained to IGN, "Mark has always been of interest to me and interest to the project. We have not contacted his agent yet because we’re not casting the role quite yet, but that being said, I am loving what’s happening on the internet. And I’m loving all of the fan reaction to it. Obviously, we’ve seen what a huge fanbase The Witcher has, and to add that to a Star Wars fanbase... it makes my mind explode a little bit."

The Witcher season 2 plot: what to expect

The Witcher season 2 will pick up where season 1 left: after Geralt and Ciri finally meet.

Season 1 juggled a few different timelines. In the "past," Geralt and Yennefer crossed paths several times (and engaged in a torrid romance), all while Geralt knew Ciri was his "destiny" — even if they didn’t meet until the finale.

That finale also featured the Battle of Sodden Hill, in which Yennefer unleashed a massive force of magical power against the invading Nilfgaardian army — and then disappeared.

Season 2 will follow Geralt as he protects Ciri and helps her train in her mysterious powers. As for Yennefer, her status is unclear, but it’s safe to say she’ll reappear somehow, but she’ll be dealing with the aftermath of the battle.

"She took a big risk at the end with that firepower, and it doesn't work out so well for her," Hissrich told Business Insider.

As for the destined-to-meet duo, the showrunner teased, "You'll get to know where [Geralt] came from and why he is the person he is in season 1." Meanwhile, Ciri is "not looking backwards anymore or looking back at her family in Cintra anymore. She's trying to build a new family."

Hissrich has said that season 2 will draw from Sapkowski’s novel Blood of Elves, as well as unused parts of the stories in The Last Wish and The Sword of Destiny.

In her Reddit AMA, the showrunner explained, “We’re approaching S2 in a similar way we did with S1: what are the stories Sapkowski was telling, and why? What building blocks do we need to set up future stories? Is there anything we missed from S1 that we want to include? And what will work on television? For instance — no one wants to see Triss have diarrhea for three episodes. So what are we trying to glean from that in the books, and how do we present that onscreen?”

One thing some viewers may feel relief over is that season 2’s storytelling will be more linear, with much less timeline-jumping, though Hissrich said, “We'll continue to use flashbacks when we need it, or other devices."

(For anyone who remains confused about when certain events happened, check out Netflix’s interactive Witcher map and timeline, which also contains a secret message in the Elder language that translates to, "When something ends, something begins.")

That map will expand and get more detailed as the show explores more of the mythology, history, culture, and politics. "We decided to save some tidbits of witcher lore until… you actually meet more witchers," Hissrich teased.

Another area the show will delve into is Nilfgaard, the powerful empire that attempts to invade Cintra in season 1.

"We felt like we needed to set up a 'bad guy' in S1 — but it’s our hope that we've added enough layers to Cahir and Fringilla that the audience thinks 'Wait, but THEY don’t seem insane. So what do they see in Nilfgaard? Maybe there's more there than meets the eye?'" Hissrich said.

"Perhaps we didn’t go far enough in S1, to see more behind Nilfgaard's curtain — but it will definitely be explored more thoroughly in S2."

Is there a The Witcher season 2 trailer?

No, The Witcher season 2 does not have a trailer yet.

Cavill teased season 2 via an Instagram video in early January, though it included no footage.

He said, “Hello everybody, I'm back. I have been enjoying my Christmas break, perhaps a little too much at some points, but now it is back to work. Pre-production will be starting very shortly on Witcher season 2. I see that you've all enjoyed Witcher season one, thank you very much for that, and I'm glad you enjoyed it. I'll be giving you updates on here as time goes on."

In addition to updates from Cavill, fans may see some early footage at San Diego Comic-Con in July 2020.

The Witcher season 2 set photos: what we’ve seen so far

The Witcher season 2 does not have any photos from the set so far.

Check back for updates as filming gets underway.