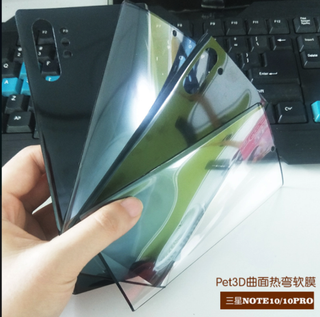 It might be one of the worst-kept secrets in the smartphone market, but we now have another look at the Samsung Galaxy Note 10 and its bigger alternative, the Galaxy Note 10+ (or Note 10 Pro).

Ice Universe, a serial leaker who is often accurate in Samsung predictions, has published a new image from a Weibo user who goes by the name Pet3D that seems to show the front and backplates for the upcoming Galaxy Note 10s.

The image shows one version with a triple-lens camera, which is believed to be coming to the Galaxy Note 10. Another backplate in the image seems to show additional real estate in the camera hole to accommodate a fourth camera lens, which is supposedly a time-of-flight sensor that will help improve bokeh effects in portraits as well as performance in AR apps.

The front of the device doesn't look all that different in the image. Both appear to come with big screens and thin bezels all around, as well as a small hole at the top of the screen for the front-facing camera. It's believed that the 6.75-inch Galaxy Note 10+ will have a larger screen than the standard 6.3-inch Galaxy Note 10.

If all this sounds familiar, it's because it follows what we've heard elsewhere in other rumors. Indeed, with all of the rumors that have lined up in recent weeks, the Galaxy Note 10 and Galaxy Note 10+ are quickly becoming known quantities even before they're announced at August 7 at Samsung's big Unpacked event.

According to the rumors, the devices will be powered by Qualcomm's Snapdragon 855 processor. And as the image above seems to confirm, Samsung won't be adding an earpiece to the device. Instead, the smartphones will deliver audio via a Sound on Display feature.

In a tweet that accompanied the latest leak, Ice Universe said that "there will be no better screen than the Note 10" once the Android phones hits store shelves later this year.

Get up to speed on all of the latest info with our updated Galaxy Note 10 rumors and news page.