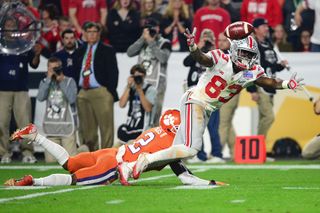 After an unbeaten regular season, the Clemson Tigers are ready to defend last year's national title, starting with today's college football playoff semifinal in the Fiesta Bowl. But the Tigers face a tough test — the Ohio State Buckeyes are also undefeated, having won the Big 10 Conference.

The Ohio State vs. Clemson game figures to be a tight contest, with a trip to the Jan. 13 national title game on the line. And thanks to the many streaming options available, you don't have to miss a moment, even if you don't have cable.

Here are your options for live streaming Ohio State vs. Clemson.

When can I watch the Ohio State vs. Clemson game?

Ohio State vs. Clemson gets underway at 8 p.m. ET/5 p.m. PT on ESPN. But ESPN's other assorted channels will also feature live feeds of the Fiesta Bowl, covering the game from different angles.

On ESPN2, you can watch the Command Center feed, which features up to four different vantage points during the broadcast. ESPNU features a Game Film-style broadcast with analysts breaking down the action on a telestrator in real time. ESPNews carries an above-the-field Skycast view, so you can watch a stream of the Ohio State vs. Clemson game from behind the offensive line. (Think of this as the video game view.) Clemson fans will want to tune into the ACC Network, which picks up ESPN's coverage, but uses the Clemson radio feed for play-by-play coverage.

Insomniacs and college football fans in the U.K. can watch the Ohio State vs. Clemson game at 1 a.m. GMT on Sunday, Dec. 29 through BT Sport's ESPN channel.

How can I use a VPN to watch the Ohio State vs. Clemson live stream?

If you're traveling outside the U.S. and you can't find a Ohio State vs. Clemson broadcast, you've still got options to watch the playoff semifinal, but you'll need a virtual private network, or VPN, to do it. A VPN disguises where you're browsing the web from, so you can continue to access the same streaming services you use back at home.

After a lot of testing, our pick for the best overall VPN is ExpressVPN. It offers the best mix of performance and customer support, plus a low price if you sign up for more than a year of service.

How can I live stream the Ohio State vs. Clemson game?

No TV around when the Fiesta Bowl gets underway? No problem — if you're a cable or satellite TV subscriber.

ESPN will live steam Ohio State vs. Clemson on its website, and you can also watch the college football playoff semifinal on your mobile device with the ESPN app (Android, iOS). But these options require you to sign in with the login credentials of your TV provider, so if you don't subscribe to cable, you're shut out here.

How can I live steam the Ohio State vs. Clemson game without a cable subscription?

Your best bet is to sign up for a subscription with a streaming service that includes ESPN in its array of channels. (That excludes the sports-focused Fubo.TV, which remains an ESPN-free zone.) Fortunately, several services offer ESPN in their basic packages, available at a wide range of prices.

Sling.TV: Sling is still the lowest priced option, even after it raised its monthly rate. ESPN is in Sling's Orange package of channels, which costs $30 a month. However, a promotion is taking $10 off your first month of service.View Deal

YouTube TV: If price is less of a concern, YouTube TV gives you more channels. Along with ESPN, you also get 70-plus channels along with a cloud DVR feature for recording Ohio State vs. Clemson to watch later.View Deal