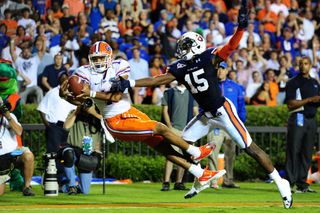 We know one thing about the Auburn vs. Florida college football game kicking off later today (Oct. 5) in Gainesville, Fla. Once it's over, there will be one less unbeaten team in the country, as both the Tigers and the Gators bring perfect records into this SEC showdown.

The Auburn vs. Florida game is one of the best matchups in college football this weekend, and you don't have to miss a minute, even if you're nowhere near a TV set when the game gets underway. Here are all your streaming options to watch the Tigers take on the Gators.

When can I watch the Auburn vs. Florida game?

How can I use a VPN to watch the Auburn vs. Florida game?

Out of the country when the Tigers and Gators get underway? Not to worry — a virtual private network, or VPN, can make it seem as if you're surfing the internet at home, even if you're an ocean away. That way, you can access the same services you would be able to at home, including any live streaming options for Auburn vs. Florida.

We tested many different offerings, and our pick for the best overall VPN is ExpressVPN. In our testing, it had the best mix of performance and customer service, and the price is pretty attractive, too, especially if you're able to sign up for extended service. But you've got other VPN options as well — here are our top picks.

ExpressVPN: ExpressVPN can access more than 3,000 servers spread out across 160 locations in 94 countries so you'll be able to find a connection most of the time. You'll also get reliable customer service from ExpressVPN if you run into any trouble.

NordVPN: Go with NordVPN if you value privacy, as the service uses 2084-bit encryption. It also works well with streaming services — handy if you want to catch a college football game. NordVPN costs $11.95 per month, you can cut that down to $2.99 per month if you sign up for a multi-year service plan.View Deal

TunnelBear: It's not the best-performing VPN by far, but TunnelBear is a good choice if you just need a VPN for a one-and-done event like watching the Auburn vs. Florida game. TunnelBear has a cheap monthly price ($9.99), and it's friendly enough for novices to use.View Deal

How can I live stream the Auburn vs. Florida game?

If you've got a cable subscription, you can head to the CBS Sports website or the CBS Sports app (Android, iOS) on your smartphone. Either option will carry a live stream of the Auburn vs. Florida game, so you'll be able to watch the action even if you're not near a television set. You will need to sign in with login credentials from a cable or satellite TV provider, so if you've cut the cord on cable, consider other options.

How can I live stream the Auburn vs. Florida game without a cable subscription?

Signing up for a streaming service is one way to beat the high cost of cable and still enjoy live sports. And CBS provides a low-cost option that should satisfy fans of SEC schools.

CBS All Access costs $5.99-a-month, and while it's mostly known for its original programming — think Star Trek Discovery — it also gives you access to CBS's own shows, including college football coverage like the Auburn vs. Florida game.

Other subscription streaming services cost more, but they also provide more channels than just CBS, so if you keep your subscription, you'll get the chance to watch more college football beyond just the Auburn vs. Florida match-up. Just be sure that the service you opt for carries your local CBS affiliate — not all local channels are supported in all markets.

Here's a list of the streaming services where you may be able to catch today's Auburn vs. Florida game.

AT&T Now: The service formerly known as DirecTV starts at $50 a month, and this Plus package includes CBS.View Deal

Fubo.TV: A streaming service with a focus on live sports, Fubo.TV starts at $55 a month and includes CBS among its channels. A cloud DVR feature lets you record games like Auburn vs. Florida to watch later.View Deal

PlayStation Vue: The streaming service's entry-level Access package starts at $50 a month, and includes CBS. More sports channels are included in the next tier, which costs $55 a month.View Deal