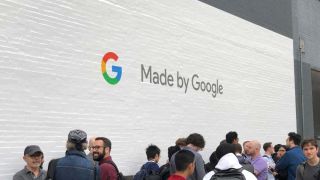 Update 9:27 am ET: Check out our Pixel 4 event live blog for all the hardware news out of Made by Google as it happens.

One thing's for certain about Google's product event coming up today (Oct. 15): By the time the show wraps up, we'll finally get our first official look at the Pixel 4 smartphone.

Anything else beyond that? Yes, but it's hard to be certain, because there are lots of rumors flying around.

It's a safe bet that Google has more than just a new phone on the agenda for the latest Made by Google event. After all, this will be the fourth year running that a fall Google product event focused on the company's hardware. And each time, the latest Pixel model shared the stage with other Google-built devices.

Take last year's Pixel 3 launch. In addition to that phone and its software-powered camera features, Google unveiled the Google Home Hub, a smart display that's been renamed the Google Nest Hub, and the Pixel Slate, the latest in a long line of forgettable iPad rivals that Google has since consigned to the ash heap of history.

So, if additional hardware is inevitable at the Oct. 15 Google event, what could that wind up being? That's something of a mystery, as the rumors have mostly focused on the Pixel 4 and its upcoming features while other potential products have flown under the radar.

"I do wonder if all the leaks coming out of Google around the Pixel 4 are to distract everyone from something else," said Avi Greengart, president and lead analyst at Techsponential.

From a new Chromebook laptop to additional smart home products, there's no shortage of potential products that could debut at Google's hardware event. Here's a closer look at all the possibilities, along with your options for watching this Tuesday's big reveal.

When is the Made by Google event, and how do I watch it?

This year's Made by Google event takes place on Tuesday, Oct. 15. The event gets underway from New York at 10 a.m. EDT/7 a.m. PDT.

It's easy to follow along from home if you don't have an invite to the Google event. Google will stream everything on YouTube, and you can even set a reminder from the event's YouTube page so that you don't miss that 10 a.m. EDT start time.

Pixel 4: Guaranteed to be there

Not only is it pretty obvious that the Pixel 4 is going to be unveiled this Tuesday, but we also know a lot about the features on Google's latest phones that the event will highlight. And a lot of that information has come straight from Google.

It was Google, after all, that tweeted out a picture of the back of its next smartphone, revealing multiple camera lenses. (Previous Pixels have made do with a single shooter, relying on Google's flair for computational photography to handle features like zooming and portrait effects.) Google has also confirmed that you'll be able to control some functions of the phone using gestures, thanks to a new feature called Motion Sense.

We can fill in other details about the Pixel 4 by either logic or leaks. You would expect new phones from Google to run on the Android 10, the latest version of Google's mobile operating system, and the phones are likely to rely on the Snapdragon 855 mobile processing platform that's powering all the leading Android devices of 2019.

Look for Google to stick with a regular Pixel and a larger, XL version; leaked specs suggest a 5.7-inch display for the Pixel 4 and a 6.3-inch screen on the Pixel 4 XL. Even with the extra camera lens coming to the back of the Pixel 4, Google's likely to introduce new camera features that draw heavily on computational smarts and machine learning. According to the leaks we've seen for pricing, we can expect the Pixel 4 XL to start at around $999, which is a little more expensive than the launch price for the Pixel 3 XL.

Rumors point to other possible Pixel 4 features, like a 90-Hz refresh rate for the phone's display, which would mean smoother scrolling and better gaming. Google is reportedly working on a 5G version of its Pixel smartphone, but other reports suggest that this phone isn't being mass-produced yet; that would mean that a 5G Pixel 4 would get only a mention at the Oct. 15 event, if Google even brings it up.

There's one other Google product generating a lot of rumor buzz besides the Pixel 4. Several sources point to Google developing a new Pixelbook, since it's been two years since the company last updated its line of Chromebook laptops.

This time around, Google is apparently turning to a new name, the Pixelbook Go, and it'll be a bit of a departure from its predecessor. Instead of a convertible, 2-in-1 design, the Pixelbook Go will reportedly go with a more traditional clamshell look. This version of the Pixelbook will also drop support for the Pixelbook Pen stylus, if rumors are accurate.

Otherwise, we don't have much to go on about what Google's planning for the Pixelbook Go, other than that it's the most likely candidate to join the Pixel 4 on stage. Leaks have suggested thinner bezels and high-resolution screens, though.

Google's been pretty busy on the smart home front, and we don't just mean changing the name of the Google Home Hub. Over the summer, the company released a larger version of that smart screen, called the Nest Hub Max. And it sounds like Google is just getting warmed up in extending the reach of its Nest lineup into your home.

A smaller version of the Google Nest Hub smart speaker, the Nest Mini, has been suggested to be appearing too. The rumored price for this is $49.99, which happens to be the same as the Amazon Echo Dot, its biggest rival for pint-sized smart home work.

Google has plenty of incentive to update its lineup of smart speakers and displays. The company's Oct. 15 product event comes three weeks after Amazon unveiled a slew of products, including four new Alexa-powered Echo speakers. That puts pressure on Google to keep pace with its chief rival in the smart speaker market.

A prime candidate for an update this coming week could be the Google Home Mini, and we don't just expect Google to slap Nest on the label and call it a day. The current Google Home Mini sounds great, but it lacks the versatility of Amazon's Echo Dot. And that was before Amazon introduced the practical improvement of adding an LED that displays the time in the form of the Echo Dot with Clock. The pressure's on Google to come up with enhancements of its own that make its smart home products as compelling as Amazon's lineup.

Another older Google product could be in line for the Nest treatment as well. Google Wifi, introduced at one of the first Google hardware events, delivered a mesh router in a compact package. Rumors point to Google rebranding the product with a Nest moniker and adding new features. 9to5Google says to expect a new design and, more significantly, a built-in Google Assistant so that your router can double as a smart speaker.

Pixel Watch: We'll believe it when we see it

Another Google hardware event means another round of speculation that this will finally be the year Google builds its own smartwatch, showing the rest of the world how to finally make a Wear OS watch. So why not float the Google watch rumor again for this Tuesday's event?

The trouble is, there's very little evidence pointing to the imminent launch of a Pixel Watch, outside of a Nikkei Asian Review report that mentions a smartwatch as a possibility for Google's hardware event. Google did buy smartwatch technology from Fossil earlier this year, but that's been all the news on the Pixel Watch front, other than a report in September that suggested a new watch wouldn't arrive this year.

I may be one of the few people willing to say on the record that I kind of liked the original Pixel Buds, or at least I like the idea behind them. These 2017 headphones integrated Google Assistant and offered a promising translation feature. But audio was only so-so and these supposedly wireless earbuds were actually connected by a wire that draped uncomfortably over the back of your neck.

"An update to the Pixel Buds would be great, especially a version that is truly wireless," said Ramon Llamas, IDC's research director, when I asked him what we might see at the Google event besides a new smartphone.

Google may be planning exactly that, at least according to a 9to5Google report from earlier this month. And while details about the potential update are scarce, better wireless earbuds seem like something Google would want to trot out on Tuesday.

Apple has enjoyed tremendous success with its AirPods lineup, so much so that other device makers have tried stealing some of Cupertino's thunder. Amazon introduced Alexa-equipped Echo Buds earbuds at its product event last month, while Microsoft responded with Surface Earbuds at its October event. That puts the ball — or the earbuds — squarely in Google's court.

Google could always surprise us with something that's flown totally under the radar while the rest of us were concentrating on Pixel 4 leaks. For years, virtual reality was a staple at Google product events, though news of the company's Project Daydream efforts have been MIA recently. "I'm keeping my fingers crossed for a smartwatch and some AR/VR devices," IDC's Llamas said.