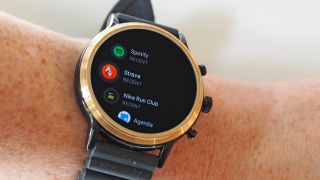 Google may have its own Wear OS smartwatch, similar to the Fossil Gen 5 seen above, in the works. (Image credit: Tom's Guide)

Stop me if you've heard this one before: Google might take the wraps off its long-rumored Pixel Watch at its hardware event Oct. 15.

People have been clamoring for Google to make its own smartwatch for years, as Wear OS watches built on the company's wearables software platform have failed to impress. Now sources tell Nikkei Asian Review that Google might finally have a smartwatch to announce alongside the Pixel 4 next week.

Details about the watch, including its name, features, price or availability, are nonexistent, so it's unclear whether the publication's sources have the inside scoop or are simply hopeful that a smartwatch is in the works.

But we've been through this before. Google was rumored to be announcing a Pixel Watch at last year's Pixel hardware event before Tom's Guide broke the news that the company was choosing to focus on its partners' watches rather than make one of its own.

Back in August, LetGoDigital discovered a patent for a Google smartwatch with a camera, but there's no guarantee that the Pixel Watch will be able to snap pictures or let you video chat.

A lot can happen in a year, of course, but the rumor well has been pretty dry on that front. If a Pixel Watch debuts next week, we'll be just as shocked as you are.