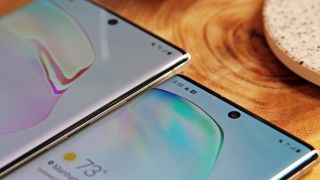 Forget about leaks, furtive screenshots and cryptic tweets. The Galaxy Note 10 arrives in stores this Friday (Aug. 23), and we know exactly what kind of specs Samsung's latest phablet offers — no inside sources required.

Preorders for the new phones are already underway, with the new models landing on retail shelves on Aug. 23. All the major carriers are offering the Note 10 and Note 10 Plus, and you'll find the phones at many retailers including Best Buy, Walmart and Sam's Club. Microsoft is selling the phones, too, as part of a new partnership with Samsung. We've got details on all the latest Note 10 deals as the phones arrive in stores.

The different sizes become more apparent when you pick up the two phones. Though it's still a phablet with a screen larger than 6 inches, the Note 10 feels remarkably compact. It's the lighter of the two phones, at 5.9 ounces to the Note 10 Plus' 6.9-ounce weight.

You'll get a sharper screen with the Note 10 Plus, which offers Quad HD+ resolution. In our testing, we found the Note 10 Plus to offer one of the best displays we've ever seen. The Note 10 Plus' screen registered 686 nits of brightness when we measured it with a light meter, topping rival flagships like the OnePlus 7 Pro, iPhone XS Max and even Samsung's own Galaxy S10 Plus. The display is colorful, too, with the Galaxy Note 10 Plus capturing 212% of the sRGB color gamut when we had the phone's display set to Vivid Mode.

The Note 10 family include the first Samsung flagships to make do without a headphone jack. You'll also give up a microSD on the Note 10, a concession to that model's more compact design.

If you're familiar with the camera array Samsung introduced with the Galaxy S10 and S10 Plus this past spring, then you're up to speed on the Galaxy Note 10's array of shooters. Samsung didn't change any of the hardware for the Note 10's cameras, instead focusing on new software features such as new video modes.

That means a triple lens setup on the Galaxy Note. You'll have a 12-megapixel main camera that can vary between apertures of f/1.5 and f/2.4. (Alas, reports that the new phones would feature a third variable aperture didn't pan out.) The main lens is joined by a 16-MP ultrawide camera and a 12-MP telephoto lens that offers the same 2x optical zoom as before.

You'll find those same three cameras on the Galaxy Note 10 Plus, but they're joined by something Samsung's calling a DepthVision camera. Think of it as a time-of-flight sensor whose job it is to figure out shooting space in certain camera modes — Portrait mode say — for better image effects and more striking shots.

We've got a camera face-off between the Galaxy Note 10 Plus and other leading camera phones in the works. So far, we've found that the Note 10 Plus takes good shots, though we're a little disappointed in its inability to surpass what the Pixel 3 and Huawei P30 Pro have to offer.

Speaking of things that are unchanged from the Galaxy S10 lineup, the Note 10 and Note 10 Plus run on Qualcomm's Snapdragon 855 processor (and not the more graphics-capable Snapdragon 855+ as had been rumored). That's for U.S. versions of the Note 10, anyhow. In other markets, Samsung uses its own Exynos 9825 chipset for the phones.

We've had the chance to benchmark the Note 10 Plus, and it performs well, thanks to all that extra RAM and the faster UFS 3.0 storage it uses. The Galaxy Note 10 Plus' Geekbench 4 score of 11,210 is on par with the OnePlus 7 Pro, which also comes loaded with RAM. The A12 Bionic-powered iPhone XS Max continues to set the pace for smartphones with a 11,515 Geekbench score, and the A13 processor debuting in the iPhone 11 next month is expected to be even faster.

In terms of graphics, the Note 10 Plus topped all phones, including the iPhone, in 3DMark's Sling Shot Extreme test. The Galaxy Note 10 Plus was also the fastest Android phone in our video encoding test using Adobe Rush, though it trailed the iPhone XS Max's result by 53 seconds.

A bigger phone requires a bigger battery, and that's what you'll get with the Galaxy Note 10 Plus. The new phone relies on a 4,300 mAh power pack to stay charged, a boost from the 4,000 mAh battery in the Note 9. The Note 10 takes a step back: it's only got a 3,500 mAh battery, but maybe its lower-resolution screen will mean less power drain than before.

The bigger battery translates to longer battery life for the Note 10 Plus. On our Tom's Guide battery test, in which we have the phone surf the web continuously over T-Mobile's LTE network until it runs out of juice, the Note 10 Plus held out for 11 minutes, 46 seconds. That's a 20-minute improvement over the Note 9's result, and good enough to land the Note 10 Plus on our list of longest-lasting smartphones.

You'll be able to charge the Note 10 faster than any Galaxy phone before it. Both models will come with a 25-watt charger which should be capable of fully charging the phone in about an hour. Samsung's new phones also are capable of 45-W charging, which will top off the battery even faster, though you'll have to spring for a separate $50 charger on top of your $949-plus phone.

When we charged the Note 10 Plus after draining its battery, the 25-watt charger that came with the phone got the 10 Plus back to 33% of capacity after 15 minutes. At the half-hour mark, the battery indicator was up to 65%.

As with other recent Galaxy flagships, the Note 10 and Note 10 Plus can be charged wirelessly (at 15-W speeds). The Wireless Power Share feature returns, meaning you can charge other Qi-compatible devices just by placing them on the back of the Note 10.

The Galaxy Note lineup is all about the S Pen, and that remains the case with the Note 10. Samsung upgraded the capabilities in the phone's stylus to let it convert your handwriting to text. New Air Actions let you change camera modes on the Note 10 by swiping your S Pen through the air; a circular motion with the S Pen lets you zoom in the camera without having to touch the on-display controls. It's a good addition, though some gesture controls were finicky in our testing.

DeX mode, which turns your Galaxy Note into a portable PC that can plug into a monitor and keyboard, returns. This time around, you'll only need a USB-C cable (either one that plugs into another USB-C port or a USB-A port) to enable DeX mode.

The Galaxy Note 10 doesn't feel like a big departure from the Note 9 — or really the Galaxy S10 Plus that came out earlier this year. The same processor and same cameras lend the phones a "Been There, Done That" feel when you scan down the spec sheet.

As always, the distinguishing feature will be the Note 10's S Pen. Do the new capabilities make either Not 10 model a must-have for users who value productivity? We're also interested to see if the display on the Note 10 Plus — the largest screen on any non-folding Samsung phone — can let people work more efficiently on their mobile device.

Having reviewed the Note 10 Plus, we think the new model is a step up from last year's Note 9 and a welcome arrival for fans of big-screen phones. We'll see how the Note 10 measures up as we spend more time with that model.