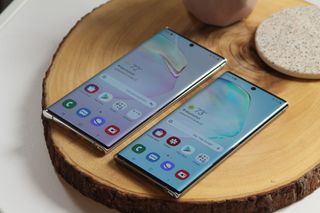 This year, we've gotten not one, but two versions of Samsung's flagship phablet, the Galaxy Note 10. There's the standard model, at 6.3 inches, and the Galaxy Note 10 Plus, toting a gargantuan 6.8-inch display.

However, the differences between the two handsets go far beyond size. Complicating things further, the Note 10 will set you back $949, while the Note 10 Plus starts at $1,099.  If you're trying to decide which new phablet to buy, here's how they compare.

The Note 10 and Note 10 Plus are spitting images of one another, aesthetically speaking. Both are wrapped in Gorilla Glass 6 with metal frames; feature center-mounted Infinity-O hole-punch front-facing cameras up top, set within near bezel-less displays; and lack headphone jacks for the first time in Note history.

The differences are less about design, then, and all about size. The Note 10's 6.3-inch screen is plenty large, though the 6.8-inch panel on the Note 10 Plus puts it to shame. For that reason, the Note 10 Plus is heavier as well, weighing about an ounce more than the regular version. The S Pen stylus, however, is identical no matter which model you buy.

Samsung's newest Notes are slabs in every sense of the word, with sharp edges yet rounded sides. They’ll each be offered in a range of colors — black, white, blue and the new Aura Glow. That color option has a mirrored sheen to it, yet reflects rainbow spectrums of light. Markets outside the United States will also see some additional colorways, such as red.

In addition to their contrasting sizes, the displays on both Note 10 models are also subtly different. While they each use Samsung's Dynamic AMOLED technology, the Note 10 Plus' panel sports a higher resolution to span that extra half inch of real estate.

Pulling a page from Samsung's Galaxy S10 series, the Note 10 adds another camera lens on the back, making for a grand total of three in the base model. That's two 12-megapixel wide and telephoto shooters, with one 16-MP ultrawide lens adding a 123-degree field-of-view, which should be ideal for landscapes. On the front of the phone, you'll find a 10-MP camera for selfies.

This same camera arrangement is present in the Note 10 Plus as well, though in that model, Samsung is adding a fourth lens. It's a small time-of-flight sensor that lives underneath the flash, and is designed exclusively for measuring depth and distance in 3D space.

This fourth lens, which Samsung has dubbed its DepthVision Camera, will help the Note 10 Plus ascertain a better understanding of physical space in certain shooting modes — like when capturing a shallow depth-of-field Live Focus portrait, for example. Samsung actually introduced a similar sensor earlier this year in the Galaxy S10 5G, and we found it did help the device capture slightly sharper bokeh shots, with more accurate definition between the foreground and background of a particular scene.

If the camera specs sound largely familiar, that's because Samsung hasn't punched up the still photography in the Note 10 series beyond what the Galaxy S10 line offered this past spring. Instead, most of the effort has gone into adding new video modes, like Live Focus for video and AR Doodle, which lets you draw on top of people within the video feed. While most people will likely use Live Focus video to blur backgrounds, both phones also offer a spot color feature, allowing you to keep the subject highlighted while rendering their surroundings in black and white.

Contrary to rumblings ahead of release that Samsung's phablets would use a speedier processor from Qualcomm, called the Snapdragon 855 Plus, both devices feature normal 855 chips in North America.

The Snapdragon 855 is, as you may recall, the same silicon behind the Galaxy S10, as well as many other premium Android phones that have been released in 2019. In the rest of the world, Samsung's Exynos 9825 powers each phone.

Regarding storage, both devices come with 256GB standard, though only the Note 10 Plus features a microSD slot for expandability, as well as a 512GB configuration.

With last year's Galaxy Note 9, Samsung introduced its largest battery ever in a smartphone at the time — a 4,000-mAh power pack that delivered 11 hours and 26 minutes of longevity in our testing.

The Note 10 undercuts that capacity at 3,500 mAh, while the Note 10 Plus improves upon it, with a new 4,300-mAh unit. But for whatever reason, neither Note 10 model outshone the older Note 9 on our battery test, which involves continuous web surfing over T-Mobile's LTE until the phone runs out of power. The Note 10 averaged 9 hours, 25 minutes on our test while the average result for the Note 10 Plus was 10 hours, 47 minutes.

Both Note 10 models feature 25-watt fast charging out of the box, which is a huge improvement over previous Samsung handsets. There's also a 45W option designed to push a day's worth of juice to the phone in 30 minutes, though you'll have to  buy that faster charger separately.

Both phones also support 15W wireless charging, as well as Wireless PowerShare, which allows you to use them as makeshift induction pads to recharge other devices.

Fortunately, from a software standpoint, the Note 10 pair are identical. Both sport Samsung's OneUI front end atop Android 9 Pie, and both come with the S Pen — the Note's signature stylus, that can also be used for some clever air gestures this time around. (Samsung is working on a new version of OneUI tied to Android 10, and Note 10 owners can get in on the beta.)

Hold the S Pen out in front of either phone's screen while keeping the button pressed, and you can drag in a given direction to trigger a shortcut. In the camera app, for example, swiping up in midair with the S Pen switches from the rear lenses to the front lens. Swiping left or right moves you between different camera modes, and, of course, you can always press the S Pen button to use the stylus as a remote shutter.

Productivity-minded users will be pleased to know that the Note 10 series now allows you to both convert handwriting to text and export the result to a third-party word-processing app, such as Microsoft Office 365, in one motion.

DeX Mode also returns with the latest Note generation, allowing you to plug your phablet into a monitor to transform it into a makeshift desktop computer. However, like with the Note 9, you aren't forced to use one of Samsung's purpose-built docks to enable DeX; a simple USB Type-C-to-Type-A cable will do. You can even connect the device to a Windows or Mac PC to run DeX like a second operating system, in windowed mode, so you can transfer files more easily.

The Note 10 Plus offers a number of improvements beyond the standard Note 10, running the gamut from size, to battery capacity, storage and performance and, of course, photography. However, the question is whether those improvements justify the additional $150 you'll pay for the larger model.

If you want the largest possible display on your smartphone, and are chiefly concerned with using your Note as a mobile writing or drawing tool, the Note 10 Plus seems worth it. If nothing else, the more expensive model gives you more room to work, which is probably a priority if you're considering a Note in the first place.

That said, there's something to love about how the regular model shoehorns a generous display into a body that feels phenomenally compact in your hand. And while those who spring for the cheaper option do lose out on the Plus' bigger battery, increased RAM and sharper display, those are less necessities, as far as features are concerned, and more nice-to-haves. The lack of microSD storage is perhaps the omission that stings the most, though the 6.3-inch variant's proportions indicate there was little, if any, room left for a card slot.

No matter which Note 10 you choose, you'll be getting a smartphone that truly can handle everything you throw at it — except for a pair of 3.5-millimeter headphones, that is. We'll continue to explore how the two new Galaxy Note models compare with one another as we spend more time with each phone.