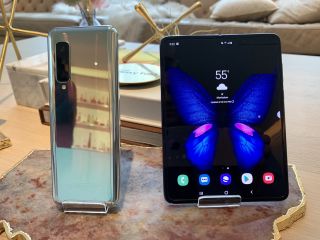 Samsung has a long list of to-dos for improving its foldable phone offerings, not the least of which is introducing a new form factor. But reports are heating up that the next version of the Galaxy Fold will feature a much improved screen.

A new report from Sammobile this week says that Samsung has lined up a Korean supplier who can provide the phone maker with tempered glass for the Galaxy Fold 2. That means a glass screen capable of folding without breaking.

The current Galaxy Fold uses a plastic screen for its main display. It's functional, though not as polished as the the Gorilla Glass-fortified displays you'll find on flagship phones. And there's a definite disconnect between having a phone that costs a sky-high $1,980 while opening up to reveal a plastic screen (albeit one that folds in half).

It sounds like that won't be a problem with the tempered glass display Korean supplier DoInsys is developing for Samsung. Sammobile's report suggests that the glass will have a thickness level of less than 100 micrometers and that it's durable enough to use with a smartphone.

The question is when we might see the follow-up to the Galaxy Fold. Most Galaxy Fold 2 rumors point to Samsung releasing its follow-up foldable in the first half of 2020, with the latest reports pointing to an April release.

Last week, we learned that Hyun-Suk Kim, president and CEO of Samsung's consumer electronics division, would give a keynote at CES 2020 in January, which would give the company a global stage to at least offer a sneak preview of upcoming products such as a new foldable phone.

The original Galaxy Fold made its debut this past February at the launch event for the Galaxy S10 family. Samsung had originally promised an April launch, but that got pushed back to September after early review units revealed some design flaws that Samsung subsequently corrected.