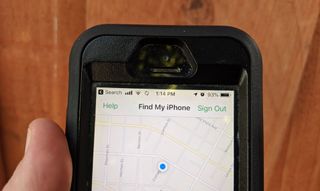 Find My iPhone is getting a revamp with iOS 13. And a new accessory might join it. (Image credit: Tom's Guide)

With the launch of iOS 13, Apple could be getting into the key finder business.

That's the word from MacRumors, which claims to have seen an internal build of Apple's upcoming mobile operating system update that points to a new tracking accessory from Apple. According to the report, you'll be able to use the attach the circular accessories to items like keys, backpacks, wallets and other things you want to keep tabs on in order to track down their whereabouts.

The accessory will reportedly work with Find My, a new app coming to iOS 13 that combines the existing capabilities of Find My iPhone and Find My Friends. Apple had disclosed the creation of Find My when it announced iOS 13 at its developer conference in June, but it apparently wants to expand those tracking capabilities beyond just its own devices.

This isn't the first time we've heard rumors about Apple developing a key tracker. In April, 9to5Mac reported that Apple was looking to expand finding features beyond its own phones, tablets and laptops. A subsequent report found mentions of a product called Apple Tag within the iOS 13 beta.

Should Apple come out with its own key tracker, it would be entering a market currently dominated by Tile, which offers a range of gadgets you attach to your keys or stick in a wallet. When those objects are out of sight, you can launch Tile's app on your phone to either sound an alarm or get the last known location the object you're trying to track. Last year's Tile Mate and Tile Pro updates added replaceable batteries to the trackers, addressing a longstanding complaint some users had made about Tile's key finders.

Other phone makers have come out with their own trackers — Samsung, for example, offers a $99 SmartThings tracker that can track down your objects using LTE connectivity. (Most key finders are less expensive and rely on Bluetooth connectivity to find your keys.) Apple would bring its own advantages, though. By baking tracking functionality directly into its operating system, Apple would eliminate the need to download a separate app.

MacRumors reports that Apple could also turn to augmented reality to make its tracking feature stand out — AR images could appear on your iPhone's screen to help you pinpoint a missing object's exact location. A tracker called Pixie offers a similar feature, though we found it awkward to use when we tested that device.

We'll soon find out if a new key tracker is really on the agenda for Apple. The company is holding a press event on Sept. 10, where it's expected to showcase the final version of iOS 13 alongside its new iPhone 11 models. If Apple does have a key finder accessory in the works, it would almost certainly show off the product there.