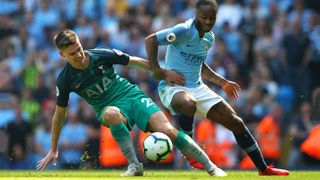 Manchester City and Tottenahm Hotspur have gotten off to a thrilling start in their match today (Aug. 17). But it's not too late to tune in and find out which team will win this early season Premier League clash.

Man City are, of course, the defending champions who are favored to win their third consecutive league title this season. In recent seasons, Spurs have become a mainstay in the Premier League's Top Four and harbor hopes of a longshot title bid themselves this year after reaching the Champions League final last season.

When is the Man City vs. Tottenham match and what channel is it on?

How can I use a VPN to watch the Man City vs. Tottenham live stream?

If you're out of the country right now, don't fret. A virtual private network, or VPN, can make it seem like you're connecting to the web from your home country, allowing you to enjoy access to the same streaming services you'd have at home.

After testing many services to find the best VPN overall, our top pick is ExpressVPN. It offers superb speeds and good customer service. But there are other VPN options that are worth your consideration. Here are our favorites.

ExpressVPN: If you want good performance and responsive customer service from a VPN that's easy to use, the easy choice is ExpressVPN. You'll appreciate how it can access more than 3,000 services spread out across 160 locations in 94 countries.

NordVPN: For privacy-minded users, go with NordVPN, since it uses 2084-bit encryption. It also works well with streaming services. While the services costs $11.95 per month, you can cut that down to $2.99 per month if you sign up for a multi-year service plan.View Deal

TunnelBear: It's not the top-performing VPN we've tested, but TunnelBear is easy to use. And its $9.99 cost for a month service is ideal if you're just getting a VPN for a one-off event like Man City vs. Tottenham.View Deal

How can I watch the Man City vs. Tottenham live stream?

U.S. viewers will be able to watch the Man City vs. Tottenham live stream on NBC Sports' website or via the NBC Sports mobile app (Android, iOS). The good news is you can stream any match airing on NBC during the 2019-2020 Premier League season that way; the bad news is you'll need to sign in with your cable or satellite TV information. In other words, cord cutters are out of luck.

U.K. viewers who don't subscribe to Sky Sports can find the Man City vs. Tottenham live stream through Now TV, which sells £9 day passes that give access to Sky Sports programming.

How can I watch the Man City vs. Tottenham live stream without cable?

Because the match is airing in the U.S. on NBC, you don't actually need a cable subscription to watch Man City vs. Tottenham. An HDTV antenna can help you pick up NBC's broadcast.

But that approach only works if you're near a TV set. If you prefer to watch the Man City vs. Tottenham live stream, you're going to need to subscribe to a streaming service. (This can also help with watching other Premier League matches this season, as the bulk of NBC's coverage will appear on the NBC Sports Channel.) Just be sure that the service you pick includes your local NBC affiliate: not every streaming service offers every local channel, and in the case of Sling TV, local network affiliates are only available in select markets.

Here are your streaming service options if you're interested in the Man City vs. Tottenham live stream.

AT&T Now: The renamed DirecTV Now starts at $50 a month for its Plus package of channels, which includes both NBC and NBCSN.View Deal

Fubo.TV: The sports-centric Fubo.TV service is a great choice if you're interested in soccer, and NBC should be available in many markets. The $55-a-month service also includes a cloud DVR feature if you'd prefer to time-shift when you watch the Man City vs. Tottenham match.View Deal

PlayStation Vue: You should be able to get your local NBC affiliate as well as NBCSN in PlayStation Vue's $50-a-month access tier. View Deal

YouTube TV: YouTube TV features 70-plus channels including NBC and NBCSN, and there's a cloud DVR feature, too. The service costs $50 a month.View Deal

What should I watch for in the Man City vs. Tottenham match?

Both teams are coming off wins in their opening match. Man City took care of West Ham United 5-0, while Spurs had to work a little bit harder in their 3-1 victory over Aston Villa.

Last season, Man City swept both matches with Tottenham by identical 1-0 scorelines. Those are relatively low-scoring games considering the firepower on both squads. Sergio Aguero, Kevin de Bruyne and Gabriel Jesus lead the Man City attack while Harry Kane has been a goal machine for Spurs.

Tottenham fans can take heart in last year's Champions League quarterfinals, in which Spurs eliminated Man City on away goals after finishing in a 4-4 draw over two legs.