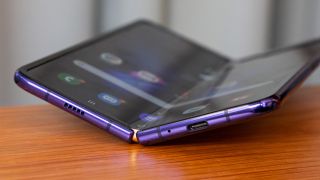 The folks over at Patently Mobile have discovered a new Samsung patent the company filed with the U.S. Patent and Trademark Office in late 2018. And while it still shows a foldable smartphone design, this one features a decidedly different foldable concept than what you'd find in the Galaxy Fold.

In order to achieve that functionality, Samsung needed to redesign the hinge mechanism. The company said in the patent that the main screen stretches across two separate pieces. There's a component on the back that connects the two sides and slides out of the way when you fold the screen. The Galaxy Fold's hinging mechanism largely stays in place to allow for the folding.

It's unclear whether Samsung would fundamentally change the Galaxy Fold's design soon after its launch or whether the design in the patent is actually for another foldable device the company could be considering.

Either way, it's the hinge that could prove to be the make-or-break feature in the Galaxy Fold and whatever we see here in the latest patent.

Samsung made review units available to tech industry critics earlier this year. At the time, those critics found issues with the hinge on the back allowing debris to get behind the screen. In turn, the screen would malfunction. Some users also reported removing the protective film over the screen, thinking it was packaging.

Samsung was forced to push back the smartphone's launch pending a review and fix. New reports have suggested Samsung fixed those problems and will launch the device in the coming weeks.

It's unclear from the patent filing whether those same problems would exist on a fold-out foldable.