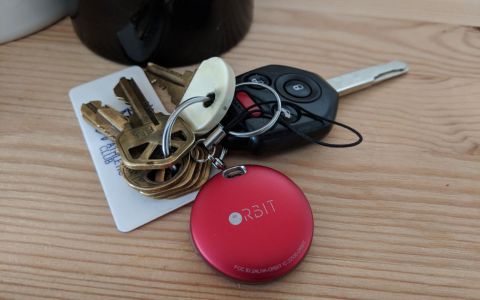 The Orbit is one of the best-looking key finders we've tested, but its performance doesn't live up to its looks.

Orbit adds a touch of class to your key chain, with a handsomely designed wireless key finder that can help you keep track of your keys or any other item, like a purse or wallet that you're likely to misplace. I only wish that all of the Orbit's features were as flawless as its look and feel. As a result, it's not one of the best key finders you can get.

What's Noteworthy About the Orbit

In the nearly four years I've been testing key finders, I don't think I've ever laid eyes on one as pretty as the Orbit. A 0.35-inch-thick disk that's 1.3 inches in diameter, the Orbit key finder is made out of a striking brushed aluminum. My test unit came in an eye-popping "candy red," but there are 11 other options that are sure to suit your taste.

Orbit's key finder invites comparisons to the Tile Pro Series, another Bluetooth gadget that places an emphasis on looks. And while Tile's stylish key finders certainly look good — I'm partial to the Tile Sport, myself — I prefer the pop of color and the brushed-metal appearance of the Orbit. That's a matter of personal taste, though.

Orbit enjoys another edge over Tile's key finders, at least for people who balk at having to replace their Tile when the battery dies: The Orbit's CR2025 battery is replaceable, and the company says you should be able to go six months before needing to swap out batteries. When you do, you'll have to use an included plastic tool that twists the Orbit open, exposing the battery. It's a bit awkward having to keep tabs on a separate tool you'll need only every six months or so, but the tool does make changing the Orbit's battery a lot easier than it is with the TrackR Bravo, another key finder with a replaceable battery.

A discreet button on the Orbit's side triggers a two-way feature that helps you find your phone. (That feature requires a double press to prevent your phone from buzzing after an inadvertent button tap.) When you're in the Orbit app (Android, iOS), you can also use that button as a remote shutter for snapping photos with your phone's camera.

MORE: Best Key Finder - Tile vs. Trackr vs. Chipolo vs. Duet vs. Pally

Unlike a lot of key finders with replaceable batteries, Orbit claims that its device is waterproof, though its IPX6 rating means it's protected only against inadvertent splashes and steady rain. I wouldn't dive into a swimming pool with an Orbit in my pocket.

How the Orbit Performs

Like other key finders, the Orbit pairs with your iPhone or Android device over Bluetooth. When you can't find your keys, you launch the Orbit app and tap the Find Orbit button (which is a little slender for my taste). A 7-second chime plays and then repeats two more times, helping you pinpoint exactly where your keys are.

That's provided you're in range, of course. When I tested the Orbit in a public park, my phone routinely lost its connection to the key finder when I was 35 to 45 feet away. That's a fraction of the 160-to-170-foot range I saw with the Tile Sport and Style, and also less than the TrackR Bravo, which stayed connected for 60 to 70 feet.

More troubling is that once you lose the connection with the Orbit, you'll have a hard time getting it back. I usually had to be within 20 feet of my keys before the Orbit app recognized me as in range again, and often, the key finder wouldn't re-establish a connection until I quit and relaunched the app. That would be frustrating if I had lost my keys and was relying on Orbit to help find them.

Orbit's alarm isn't very loud, either. The company says the alarm is 90 decibels (the Tile Pro Series lists its loudness at 98 decibels), but I had a hard time hearing my Orbit's chime from 40 feet away in a busy park. When I tucked my Orbit into a pile of clothes inside a laundry basket, I could hear the faint alarm from a room away, though only barely.

The key finder gets a few things right. Its two-way find feature means your phone will never be mislaid for long. When I tapped the Orbit's button twice, not only did my iPhone start ringing, but its rear flash began pulsing, too, and the light show didn't stop until I tapped the button on the key finder again.

MORE: Avoid These Key Finders If You Care About Your Privacy

Orbit also has one of the best implementations of a digital-leash feature, in which your phone sends out a notification if you leave the key finder behind. I left my keys behind on a park bench, and Orbit's alerts consistently arrived on my iPhone screen by the time I was 85 to 95 feet away. A safe-zone feature keeps the alarm from sounding when you're in a designated area — say, your house — and you don't want the alarm sounding just because you've gone upstairs.

There's a lot to like about the Orbit, from its striking design to the way it handles features like sounding out-of-range alerts and finding your misplaced phone. But the key finder's failure to seamlessly reconnect with my phone once I was back in range makes the Orbit less useful, especially when the equally stylish Tile Pro trackers handle that task with greater ease.